The late John Conyers — U.S. Representative from Michigan and a member of the Congressional Black Caucus — introduced bill HR 40 back in 1989, titled “Commission to Study Reparation Proposals for African Americans Act.” 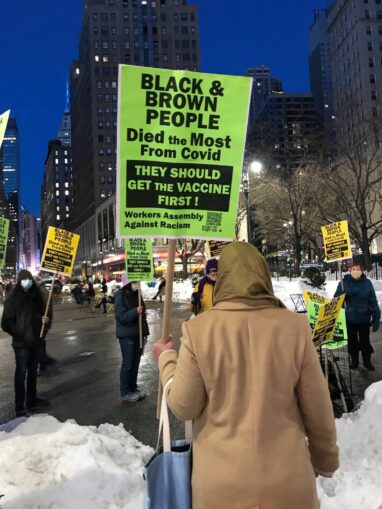 Conyers said, “African slaves were not compensated for their labor. More unclear, however, is what the effects and remnants of this relationship have had on African Americans and our nation from the time of emancipation through today. I chose the number of the bill, 40, as a symbol of the 40 acres and a mule that the United States initially promised freed slaves.” (Marxism, Reparations and the Black Freedom Struggle,” 2007, p. 20)

Conyers cited a number of objectives of the bill — including setting up a commission that “would then make recommendations to Congress on appropriate remedies to redress the harm inflicted on living African Americans.” This dormant bill was updated and reintroduced in January by Congressional Black Caucus members due to the upsurge of the Black Lives Matter struggle after the public lynching of George Floyd in May 2020.

Some concrete remedies through reparations were raised in a 2002 class–action lawsuit brought by two Black activist lawyers, Deadria Farmer-Paellmann and Roger Wareham. They sued multimillion-dollar corporations based in New York and New Jersey that had profited historically from the heinous slave trade.

The lawyers argued that the amount of unpaid wages stolen from enslaved African workers amounted to over one trillion dollars at that date. The lawsuit demanded that descendants of enslaved Africans should be compensated with a collective fund to cover the costs of housing, health care and education, given the inequalities imposed by institutionalized racism since the end of slavery.

Racism and the pandemic

The need for reparations for equal health care for African Americans is being put on full, blatant display by the raging coronavirus pandemic. It is no secret that African Americans, along with other people of color, have been dying in hugely disproportionate numbers compared to white people. The killing discrepancy is especially acute in large cities like Detroit, Chicago, New York, Milwaukee and Los Angeles.

These two physicians of color have demanded that the CDC prioritize vaccination of African Americans by actively seeking them out by nationality and ethnicity.  In other words, use affirmative action methods to guarantee that African Americans have full access to the vaccine by going to where the people live and work, rather than expecting them to go outside their communities. This is especially necessary if mass transportation is limited — and nonexistent in the case of rural communities. In contrast, whites reportedly have more easily traveled to oppressed communities to get the vaccines.

This outreach could be done with a massive leaflet campaign in communities where internet access is limited. Vaccines could be made available in community centers, churches, schools and mobile vaccination units organized by authorized organizations and individuals trusted by the community.

The vaccines should be prioritized for incarcerated workers, who are disproportionately Black, unable to social distance and denied masks while being caged in an environment lacking quality health care, food and exercise.

The inequality of death during the pandemic reflects the fact that lack of adequate health care for Black people is not an isolated occurrence but has been a generational inequality. On June 3, a study was released by University of Michigan Medicine researchers on health disparities between Black and white patients tied to white supremacy within class society: “From inadequate access to fresh food and clean water, to screening in early stages of disease or the inability to rent an apartment because of discriminatory housing practices, these long-standing systemic inequities for some Black Americans can have long-lasting effects on health.” (healthblog.uofmhealth.org)

Some of their findings included: Black people have higher rates of obesity, heart disease and hypertension. Black men have a 2.5 times higher rate of prostate cancer mortality. The lack of doctors of color means lack of medical visits. Nearly half of all Black, Latinx and Indigenous women had a lapse of insurance coverage between pre-conception and after delivering their babies, compared to approximately a fourth of white women. There has been a huge jump in colon cancer among young African Americans due to a gap in early diagnosis. Black people are more likely than white people to develop dementia as they age, due to the impact of high blood pressure on cognition, memory and executive function.

The National Poll on Healthy Aging indicated food insecurity disparities — by age, health status, race, ethnicity and education — have been potentially worsened by the pandemic. “Access to nutritious food and health status are closely linked, yet this poll reveals major disparities in that access,” says Preeti Malani, M.D., the poll’s director. “Even as we focus on preventing the spread of coronavirus, we must also ensure that older adults can get food that aligns with any health conditions they have, so we don’t exacerbate diabetes, hypertension, digestive disorders and other conditions further.” (healthagingpoll.org)

The reality is that health care is worsening across the board for the entire working class as the pandemic exacerbates unemployment, hunger, threats of evictions and more. Building solidarity within the working class to fight off these assaults — brought on by a worsening capitalist economic crisis — is the way forward.

But this can only happen when systemic racism is challenged and fought against tooth and nail, and side by side with the most oppressed who have been denied as a community any basic right, such as health care.

Racism is a poisonous venom that the ruling class — driven to hold on to their profits — uses to weaken and divide the entire working class. The struggle for reparations is more valid today than ever — and especially during this pandemic.  The right to reparations, including health care, is a worker’s issue!