Almost everyone knows that the United States is home to the most destructive, most negative reaction to drugs and drug use — the so-called War on Drugs. But fewer know that fatal overdoses can carry a charge of drug-induced homicide, laws that would punish those who provide drugs that cause fatal overdoses. 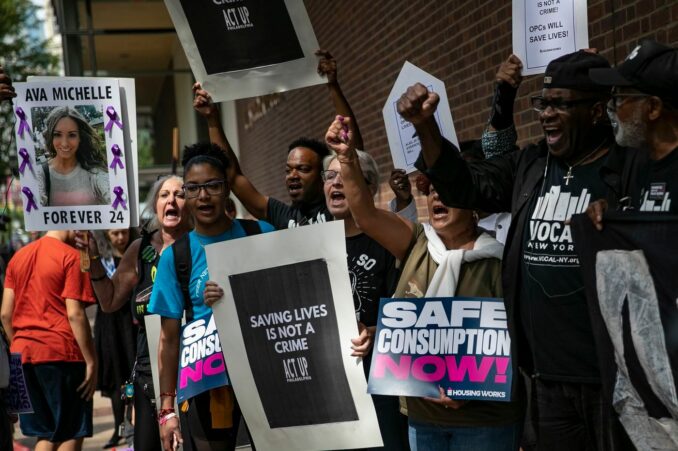 Rally in support of safe injection site in Philadelphia.

Nobody who shares drugs thinks that their drugs will be the ones to kill someone.  They do not intend to murder anyone. Yet they can be punished as though they were the root cause of said overdose death, rather than the drugs themselves.

In Pennsylvania and New Jersey, where the opioid epidemic has ravaged small towns as well as cities like Philadelphia and Camden, N. J., punishment under these laws hasn’t stopped overdose deaths. They actually could end up forcing more overdose deaths, as people flee out of fear of being arrested and charged.

As the opioid epidemic gets worse, these laws against “drug-induced homicide” get stricter and stricter. This forces people to make hard decisions that they would ordinarily not make.

An example of this happened outside Philadelphia, in Montgomery County. Joshua Benner and Ronald Shock bought drugs from Philadelphia’s “Needle Park,” McPherson Square. They were using drugs with their friend Ramon Morales when Morales lost consciousness and could not be revived by rumored means – that a cold water shower could wake someone up from an overdose. Both Benner and Shock believed they were doing all they could to try and revive Morales, but when it became obvious they couldn’t revive him, they dropped him in an area near a hospital.

Pennsylvania punishes drug delivery that results in death. Its “Good Samaritan” drug laws – that shield users from being punished for people overdosing – do not shield people who have provided drugs to those who are overdosing. Benner and Shock were afraid of what could happen had they stayed with Morales or had they called the authorities. If the War on Drugs and its strict laws were eased, then Morales might still be alive today.

The drug warriors have sworn up and down that if the United States were to make its War on Drugs laws stricter, people would be deterred from using or buying drugs for themselves and others. But this is not the case. When dealers are arrested under these laws, all that happens is that new dealers take their place.

Despite 40 years of the War on Drugs, we are even worse off with our drug problem. There are numerous stories of people being charged for sharing drugs with friends and partners. There are also stories of racial bias in charging people for having delivered drugs to others.

In Maine, in response to the overdose crisis, former Gov. Paul Le Page accused “Black dealers” and “pushers” of being the main cause of the overdose crisis, and asked for even stricter laws to punish them. A politician openly called for the strict punishing of Black people, despite the fact that Black people are not responsible for the drug problem. Prosecutors, politicians, and others who push this racist narrative have not acknowledged that their idea is flat out wrong.

What does work against drugs? Strategies against fatal drug misuse, like the distribution of Narcan and fentanyl test strips, plus the opening of safe injection sites help prevent drug overdoses and deaths. Studies have shown that strict War on Drugs policies do not help. Tens of thousands of people have died, and it’s unknown how many of them died due to people’s fear of getting help. But we do know that it makes an impact on whether or not a drug overdose patient gets help in time.

We cannot let the ruling class imprison and torture more people in the name of the War on Drugs. We must push back against laws that say that drug delivery resulting in fatal overdoses is a crime. We need to push for more healing and more justice-oriented laws that allow for people to get help for their friends, partners, loved ones, and even for strangers when they overdose. It would make such an important dent in the scourge that is drug abuse.