In November 2020, immigrants imprisoned at Bergen County Jail in New Jersey began a hunger strike to protest the filthy and inhumane conditions they were being housed in. Prisoners were experiencing a denial of access to water, medical care, heat and cleaning supplies. The facility had a rodent infestation that prisoners were forced to live with. And staff at the facility had blocked windows, limiting fresh air flow. The Bergen County Jail is used by Immigration and Customs Enforcement (ICE) to incarcerate arrested immigrants. 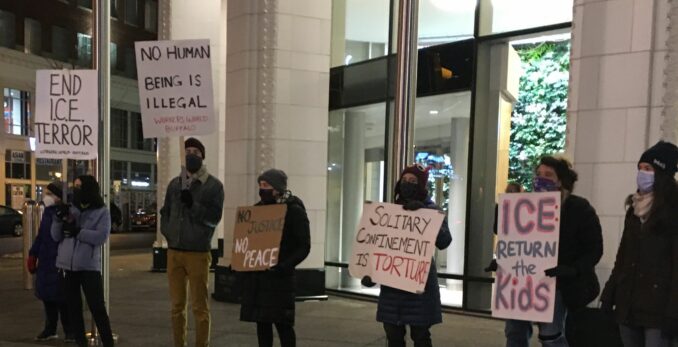 Support for the hunger strike grew in and around Bergen County, with a call for the release of prisoners. In retaliation for this solidarity, prison authorities split up the hunger strikers and transferred some to other prisons.

Rather than stopping the hunger strike, these transfers caused it to spread to the Essex County and Hudson County, N.J., and Batavia, N.Y., ICE facilities. Hunger strikers transferred to Batavia were forced into solitary confinement. Although some prisoners have decided to end the strike, many still persist as support for the prisoners grows and reaches across multiple states.

The transfer of prisoners to break up the strike not only damages the mental and social health of the prisoners, but also facilitates the spread of COVID-19 from prison to prison and into the surrounding communities. The virus hits prisoners particularly brutally, because of the lack of sanitary equipment, the unclean environment and overcrowding.

In upstate New York, two protests were held by Justice for Migrant Families, Rochester Rapid Response Network and Abolish ICE NY-NJ and were attended by members of Workers World Party-Buffalo. On Jan. 14, demonstrators gathered outside the Buffalo ICE field office, raised the demands of the strikers and played the voices of the imprisoned over a loudspeaker.

On Jan. 19, another demonstration was held at the ICE facility in Batavia, N.Y. Protesters from Buffalo, Rochester and surrounding areas gathered to demand the release of the hunger strikers, abolition of ICE and a closure of the immigrant camps.

Kawiye Jumale, local immigrant activist and member of the Somali Bantu community — whose own brother was locked in the Batavia ICE facility — spoke out about the injustices of the U.S. government against immigrants and refugees: “We came here thinking that we were gonna have a chance at the ‘American Dream.’ . . . There ain’t no such thing as the ‘American Dream!’ We came here, and we are in the same oppressive environment. They are making money off of us!”