At 2:20 a.m. on Jan. 17, 1991 (Gulf time), U.S. helicopters penetrated Iraqi territory, destroying two radar stations with Hellfire missiles. Immediately afterwards, Tomahawk cruise missiles and F-117A stealth fighters struck other nerve centers, blinding the air defenses of the capital. CNN broadcasted to the whole world the images of the Baghdad sky illuminated by antiaircraft tracers firing blindly, a “spectacle” that the reporter compared to the festive fireworks of the 4th of July.

Thus began what the Pentagon described as the most destructive military action ever carried out in such a short time with nonnuclear weapons, a model for future wars. 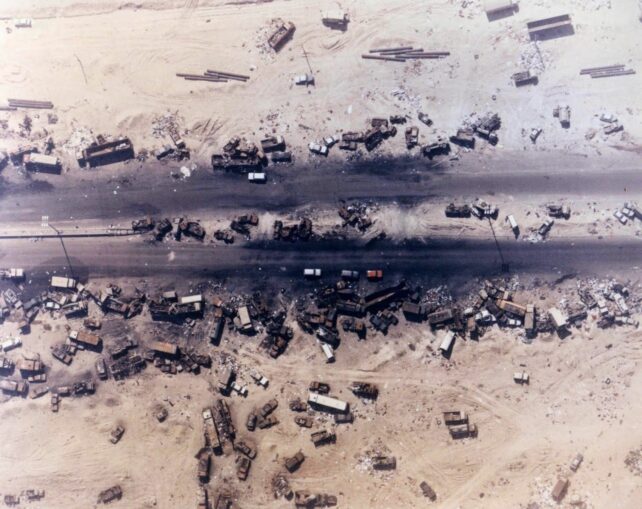 Paradoxically, war broke out at the moment when “peace broke out” (according to the slogan of the time). After the collapse of the Berlin Wall in 1989, the Warsaw Pact and the Soviet Union itself were about to dissolve. “The Cold War is over, we have entered a new era that offers great hope,” President George H.W. Bush announced, but “the Gulf crisis reminds us that there are still autonomous sources of turbulence in the world.”

In fact, the “turbulence” was triggered by Washington to take full advantage of the fact that, with the breakup of the Soviet bloc, the United States, as it officially declares, remained “the only state with truly global strength, reach and influence in every dimension — political, economic and military: There is no substitute for  [U.S.] American leadership.”

After having supported Saddam Hussein’s Iraq in the 1980s in the war against Khomeini’s Iran, the U.S. pushes Kuwait, which has helped Iraq to fight Iran, to demand from Baghdad the immediate repayment of a loan of tens of billions of dollars and to exploit beyond measure, damaging Iraq, the oil field that extends under both national territories.

While the tension between Kuwait and Iraq grows, on July 25, 1990, the U.S. ambassador in Baghdad, April Glaspie, assures Saddam Hussein that she has direct instructions from President Bush to “seek better relations with Iraq” and that “we have no opinion about your border dispute with Kuwait.”

A week later, in a colossal error of political calculation, Iraq invaded Kuwait. Later, Iraq proposed its withdrawal in exchange for certain concessions, including access to the Gulf [which was] denied to it when Britain had redrawn the map of the Middle East in the 1920s.

The trap was sprung. The United States — which had been preparing the war for some time, observing with military satellites the deployment of Iraqi forces and identifying the targets to be hit — formed an international coalition that sent a large army of 750,000 troops to the Gulf under the command of the U.S. General Norman Schwarzkopf.

In November 1990, the Security Council of the U.N. approved — with 12 votes in favor (including the USSR), 2 against (Cuba and Yemen) and the abstention of China — Resolution 678, which authorized the use of “all necessary means” against Iraq.

The Gulf War was the first war in which the Italian Republic participated under U.S. command, violating Article 11 of the Constitution. NATO, although not participating officially as such, provided its forces and bases.

Immediately after the war, NATO launched, along the lines of the new U.S. strategy, the “new strategic concept of the Alliance,” which Italy copies with the “new model of defense.” It went from war to war, presenting them as “humanitarian operations for the export of democracy” — Yugoslavia 1999, Afghanistan 2001, Iraq 2003, Libya 2011, Syria 2011 and others.

This was the war that President Bush declared in 1991 would open “a better future — a new world community united by the growing consensus that force cannot be used,” and that for this reason “the Gulf crisis will go down in history as the crucible of the new world order.”

Witness the millions of dead, disabled, orphans and refugees caused by the Gulf War, plus the 1.5 million deaths, including half a million children, caused by the subsequent 12-year embargo on Iraq and the long-term effects of depleted uranium shells, plus the many more caused by the new war in 2003. The trail of death that began 30 years ago in the first post-Cold War war continues to spread.

War by the numbers

In the war called “Desert Storm,” the U.S. and allied aviation carried out in 43 days, with 2,800 aircraft, over 110,000 sorties, dropping 250,000 bombs, including cluster bombs that released over 10 million submunitions.

It was an unprecedented deployment, from the Second World War onwards, composed of forces from all continents.

Italy participated in the war with 12 Tornado fighter-bombers which carried out 226 sorties, dropping 566 bombs in missions decided and coordinated by the U.S. command. The U.S. base of Camp Darby supplies air and ground forces in the Gulf from Italy.

The cost of the Gulf War in terms of military spending, destruction and economic losses amounted to trillions of dollars. The U.S. military expenditure alone for the second war on Iraq is estimated by the Congressional Budget Office as about 2 trillion dollars.

* Dinucci contributes regularly to the Italian daily web newspaper, Il Manifesto, writing often on military matters. Workers World met him for the first time at the Iraq War Crimes Tribunal held in New York City in February 1992, presided over by former U.S. Attorney General Ramsey Clark. Dinucci represented the antiwar movement in Italy that participated in the condemnation of the crimes led by U.S. imperialism and its allies and client states, taking advantage of the collapse of the USSR. WWP members played key roles in the tribunal.