The U.S. “justice” system, like every institution of a capitalist state, is a weapon designed and wielded by the billionaires to beat workers into submission. Special bodies of armed troops, deputized by the ruling class, round up workers by the millions and contrive laws to justify locking them in dangerously toxic conditions.

This is how capitalists can extract profit from the unpaid labor of workers, while simultaneously keeping them under lock and key to prevent them from organizing to fight back. The defining feature of all U.S. instruments of class warfare is white supremacy, so the violence inflicted on the working class is disproportionately and predominantly aimed at Black, Brown and Indigenous workers. 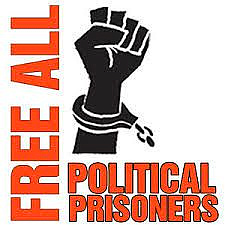 Under these conditions, the incarceration of every worker is political in nature. The system that cages them is political — the result of carefully designed policies ratified by the state. The poor and oppressed people who fill U.S. concentration camps, whether they are called “migrant detention facilities” or “correctional facilities,” are there because of the politics of capitalism and white supremacy.

But the term “political prisoner” has special resonance, because it is used to refer to those revolutionary soldiers who were specifically targeted for threatening the existence of this rotten, unjust system. Many of them are members of revolutionary organizations that the state sought to destroy through subterfuge, assassinations and frame-ups.

To identify an incarcerated worker as a political prisoner is to say that the state went to extraordinary lengths and expended special resources to concoct a reason to lock them away from their comrades and community. Political prisoners are prisoners of consciousness who fight for the liberation of their nation, their people or the working class as a whole.

The FBI and other police forces in the U.S. fought viciously to kill the revolutionary character of the social upheaval of the 1960s and ’70s. Dozens of political prisoners who were ensnared in this fascist assault are still in prison to this day.

Mumia Abu-Jamal, journalist, scholar and former Black Panther, still in prison after 39 years, is perhaps the most internationally recognized political prisoner in the U.S. The slogan “Free Mumia!” is an indictment of white supremacy as a whole.

Black Liberation Army member Assata Shakur is one political prisoner who escaped execution by incarceration. The people of Cuba warmly welcomed her as an exile.

Ana Belén Montes has been in a federal prison since 2001 for providing classified information to the government of Cuba, which helped protect that socialist project from U.S. interference.

The administrations of Barack Obama and Donald J. Trump have created a whole new generation of political prisoners. Some have avoided immediate imprisonment, but are still in the state’s crosshairs. They include Red Fawn Fallis and Michael “Rattler” Markus, Oglala Lakota Water Protectors who faced off against federal troops at Standing Rock to fight for the environment and their sovereignty in 2016; Anthony Smith, a Philadelphia organizer who was targeted by the feds for his community leadership during the Black Lives Matter uprisings; and Chelsea Manning, who was convicted of espionage after she publicly exposed proof of U.S. war crimes in Iraq.

And outside North America, the U.S. and its proxies lock up those leaders who endanger its most important imperialist projects, most notably in Palestine — where Zionist occupation forces currently have Ahmad Sa’adat, Georges Ibrahim Abdallah, Tareq Mattar, Khalida Jarrar, Khitam Saafin and Mays Abu Ghosh in custody.

Since mass incarceration is a form of class warfare, another way to characterize political prisoners is as prisoners of war. This is one way elder revolutionaries were characterized in a recent statement issued jointly from the Safiya Bukhari-Albert Nuh Washington Foundation, the Guillermo Morales/Assata Shakur Community & Student Center, the Coalition to Free Russell Maroon Shoatz “NOW,” the New York City Community Survival Program and the Universal Zulu Nation — World Department of Community Affairs. It called upon the movement to make 2021 the “Year to Free All Captured U.S. Political Prisoners.”

“Contrary to the racist statements by today’s fascist police unions,” the statement read, “our elders are absolutely no threat to carry out physical participation in the resuming of any war between the old police forces, who not only also took part in the conflict but who still have never been charged, convicted or imprisoned for their own armed police actions, murders and illegal wars on our Black, Brown [and] Oppressed communities during the Anti-Vietnam War, Pro-African Liberation, Civil Rights, Human Rights, Black Liberation, Ecological, Educational, Cultural [and] The U.S. New Afrikan/Puerto Rican/Native American Independence Movements.”

The statement, signed by veteran Black Panther-Zulu King Sadiki “Bro. Shep” Ojore Olugbala, includes a list of 23 elder political prisoners who were born before 1955 and who must be released immediately, especially as the COVID-19 pandemic rages through the prisons. The virus has already killed 2,133 U.S. prisoners.

The crisis is only getting worse. According to the Marshall Project, over 200 prisoners have died so far this month, making January 2021 the deadliest single month so far of the coronavirus pandemic for prisoners.

Workers World Party demands the immediate release of all political prisoners, especially those for whom the COVID-19 virus poses a heightened risk. In solidarity and in joining the call to make 2021 the Year of the Political Prisoner, we raise the names of some of these revolutionary soldiers: