Ted Kelly: What are the root causes of these neo-fascist insurgencies that we have seen in the 1920s in Germany, that we’ve seen in the 1970s in Boston, that we’re seeing now across the world? Why is this rise happening right now? 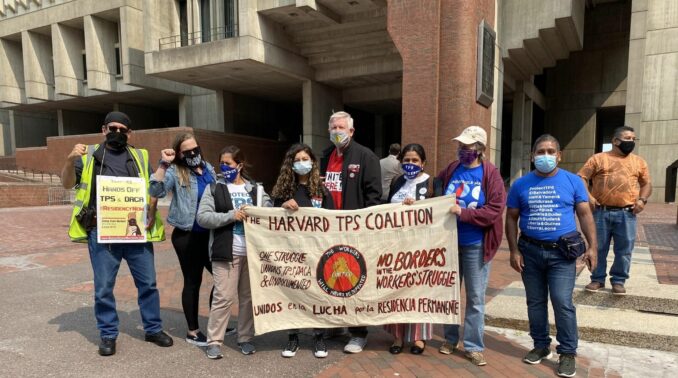 Ed Childs: Yeah, I’ve seen this in the 70s, I’ve seen it in other countries. In 1974, when they were going to integrate the Boston school system, these same fascist elements organized thousands of people. The summer before school opened, they headed two demonstrations of 20,000 people in Boston itself. They marched downtown, and any Black person downtown would be assaulted. And the assaults would be supervised by the police.

That was an actual fascist movement, showing the connection to racism. They also had demonstrations every weekend in white neighborhoods, some up to 7,000 people, but most around 1,000, which is a lot for Boston. There were the same elements of people – a lot of police, a lot of lawyers, petty bourgeois, larger landlords and store owners. But a lot of workers also, who were not so much leaders, but were suckered in to get 20,000 people into Boston.

So we’ve seen this fascist movement here before. We’ve dealt with it before. And we’ve defeated it before.

Ed: I participated in both the the Irish struggle and the South African anti-apartheid struggle. In both, to keep the colonial situation alive, the [ruling class] needed a Loyalist fascist base – which obviously in South Africa was the white population. And in Ireland, it was the Loyalist Protestant population.

But a remarkable thing happened at a fairly similar time – there was a world economic crisis, there was a 16 percent unemployment rate both in white South Africans, and also the Loyalists in Ireland. What happened – because both the African National Congress and the Irish Republican Army and Sinn Féin were extremely strong and moving – they started to recruit a lot in the working class. The ANC said they had never recruited so many whites as at that period of time. And the IRA people I interviewed in prison, a lot of them were ex-Loyalists.

Fighting the fascists in Boston, 1974

Ted: Could you tell us about the successful way that you were able to mobilize workers against racism in the 1974 struggle in Boston ?

Ed: At the time, there was an economic decline. The Civil Rights Movement had won the right to integrate schools in Boston, the last major city in the country to do so. The racist movement had a hold on Boston like no other city. And they mobilized huge.

My job in the movement at the time was actually to infiltrate that movement. One thing that I had to notice was its appeal to the white workers. How were they brought in? Because otherwise the racists couldn’t have had a movement. They needed 20,000 people on the street, because they knew the Civil Rights Movement could also muster people.

Now, the problem with that approach is that they only can do that in a vacuum, because if there’s opposition, they’re in trouble.

So we organized the opposition. They had a 20,000 people demonstration, they were organizing in the neighborhoods – so we did too. And we ended up with 25,000 to 30,000 people, led by the Black community, showing huge unity – with the main issue being “We say NO to racism!” This implied to everybody that the approach is unity, and we’re gonna fight for all goals under unity.

Who made up the other side? The same as those who made up the Capitol attack on Jan. 6. The police – I’d say when they had 20,000 people on the street, at least 1,000 were police. Large landlords, lawyers, priests and a lot of petty bourgeois. Then they suckered in a lot of workers, who had had no place to go. In their ignorance, they went to the fascist movement.

Well, when we had 25,000 to 30,000 people on the street, there was a place for them to go. We went into the diehard racist areas 5:30 in the morning and leafleted. We did have security, but we knew we wanted to reach the workers in that community. And who’s out at 5:30, but the workers? And same in the subway. We did that, and it was some of our best recruiting. At 5:30 in the morning we recruited a lot of those workers who were in the racist areas to come join with us.

We had the 1974  march – it was very strong, and the police actually attacked it. And we pushed the police back. And there hasn’t been one demonstration in Boston, to this day, of a large fascist movement. We stopped that in its tracks.

‘You’ve got to organize’

We analyzed that they did have the leadership, and they had their elements who benefit. But they also had the workers who do not benefit from the fascist movement. So we went after them – the workers on the fence. They’re looking for who’s the strongest, and they go to whoever the strongest is. When we became the strongest, a number of them, I wouldn’t say a lot, but a number of them came to us, and became organizers with us. And that’s what the struggle does.

When we did that, we totally neutralized the fascists. They weren’t able to respond at all. The movement in Boston became so much stronger. Leadership in the Black community really strengthened, and you can see it still today. Black politicians – there weren’t any at that time in Boston – started to to get elected. It changed the whole atmosphere.

Ted: We have seen living examples of the alive fascist movement on Jan. 6 in Washington, D.C. And we’ve been talking about what working people need to do.

Ed: I want to say something that recently happened in our union, Unite Here Local 26 in Boston. In July 2020, two of our Black members were brutalized by the police in Lynn, a city outside of Boston. We organized a group of 500 people, 100 union members and 400 community organizers and people in Lynn. We had a very militant march to police headquarters in town, where the police forces were mobilized. And we won! We got the charges dropped on our union members, we got a couple of police fired.

But the important thing that happened was that the people in Lynn loved it. And afterwards, when we had organizing drives in some of the hotels, it turned out some of the workers lived in Lynn, and had seen what Local 26 could do – and joined in. They had seen the struggle against racism being picked up by the local, they saw the union was very strong. These militant issues help build a coalition.