The interlocking systems of prisons, jails and detention centers were built up by descendants of those made rich from colonial conquest of this continent. The prison-industrial complex continues to benefit this very class of people every day by its existence.

As the Prisoners Solidarity Committee of Workers World Party stated 50 years ago:

“Once in a very great while, a rich man goes to prison. Maybe he is taking a six-month rap for a company that defrauded the people out of millions; when he gets out after his brief stretch, he’s set for life. And even while he’s in, every little comfort is provided for him, so that the time passes as pleasantly as possible.

“Most of all, he is never really isolated, never forgotten. His lawyers visit him constantly, the guards treat him like a ‘gentleman,’ and he is able to conduct his business affairs from prison. Prisons weren’t made for people like this. The fact that a handful of them may be in a few federal institutions is largely an accident.

“But the prisons are full, overflowing, exploding with poor, oppressed people for whom prisons have meant the end — of life, of happiness, of friends and family.”

More than sympathetic to white supremacy, Jacob Anthony Chansley was seen in videos in patriotic face paint and a horned helmet with fur during the Jan. 6 fascist insurrection at the U.S. Capitol. Since driving back to his residence in Arizona, he turned himself into the FBI. Chansley is charged with trespassing on Capitol grounds, entering violently and committing disorderly conduct while there. 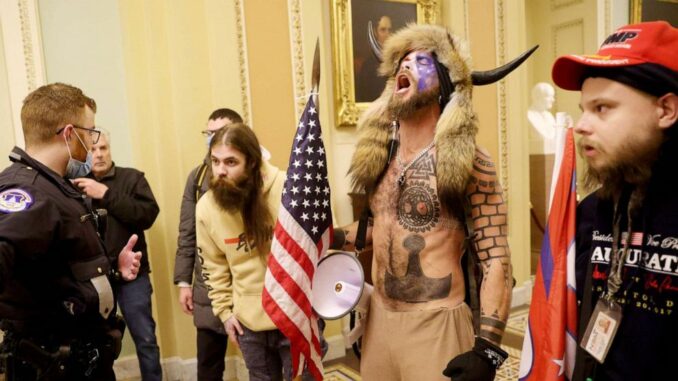 Jacob Anthony Chansley, aka Jake Angeli, inside the Capitol building on Jan. 6

How he has been treated since his arrest stands out. The Washington Post reported on Jan. 15: “In a court filing late Thursday, federal prosecutors in Phoenix wrote that ‘strong evidence, including Chansley’s own words and actions at the Capitol, supports that the intent of the Capitol rioters was to capture and assassinate elected officials in the United States government.’ On Friday, however, Assistant U.S. Attorney Todd Allison walked back the claim of an assassination plot, saying that while it ‘may very well be appropriate at a trial,’ raising it at this stage could mislead the court.”

The courts continue to protect and provide for this white supremacist. A judge ruled in favor of him being fed a diet of organic food while in the custody of U.S. Marshals on the grounds that he might have a religious reason to do so. (Newsweek, Jan. 14) 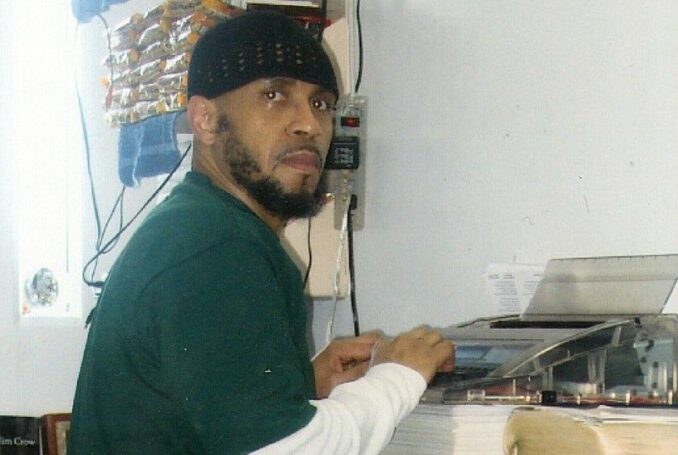 Imam Siddiqui Abdullah Hasan, on death row in Ohio, was falsely convicted of the murder of a guard during the 1993 Lucasville prison rebellion. The rebellion started after Muslim prisoners objected to being forced to take a tuberculosis test containing alcohol, in violation of their religious practice.

A stark horror in this pandemic; prisons, jails and detention centers have been a public health disaster since their inception. They spread disease, kill people slowly in a myriad of ways, isolate individuals and serve the super-rich as concentration camps for the poor and oppressed.

This society’s contradictions permeate these capitalist cages. Jails are typically the largest “providers” of mental health “care,” which becomes its opposite when managed by armed bodies of the state. Sheriffs and police have their origins on this continent in the patrols of people who escaped enslavement.

As abolitionists, our goal is not the prosecution of white supremacists to the fullest extent possible; courts, like cops, will not bring liberation. And anything used by the state apparatus in a court of law can be used against us when we hit the streets in the next big upswell against 400 years of racist, capitalist, exploitation. We must take seriously the fascists’ threats of violence and meet them with a mass response.

We are not asking that everyone be dehumanized equally in line with the most oppressed behind the walls. Abolitionists, practicing the science of change, are interested in transforming the material conditions that allowed prisons, jails and detention centers to accumulate in the first place. They stand to impose inhumanity and drive down wages for everyone in our class, the working class.

We can transform these conditions by organizing around human needs like housing and health care, giving people the tools to organize where their power lies. That may be in workers assemblies, tenants’ unions, unemployed councils, debtor’s unions. We transform these conditions by diverting stolen resources back to the people who created that wealth. And we can do that in part by showing solidarity with people caught up in the prison-industrial complex. We have diversity in tactics, but always with an aim: to crumble the foundation of that which oppresses us.

As abolitionist organizer Mariame Kaba has said, “we do this till we free us.” If we do our due diligence in networking and organizing these sorts of groupings together before irreconcilable class antagonisms reach a final boiling point, the masses will decide for themselves that they no longer accept their exploitation. 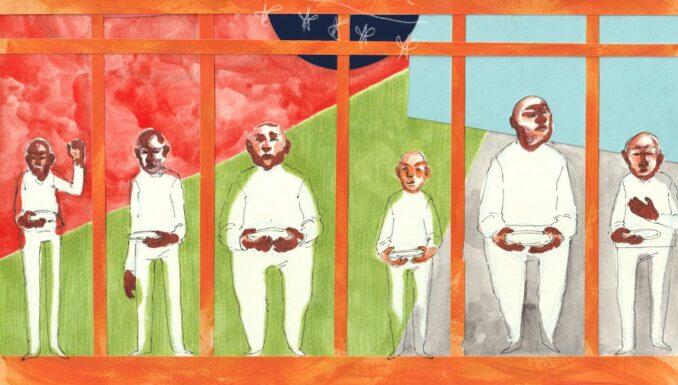 In response to the public lynching of George Floyd, 50 prisoners in Michigan prepared a feast to the extent they could behind bars to celebrate Floyd’s life. August 2020. Art by Jaye Elizabeth Elijah for TheCounter.org