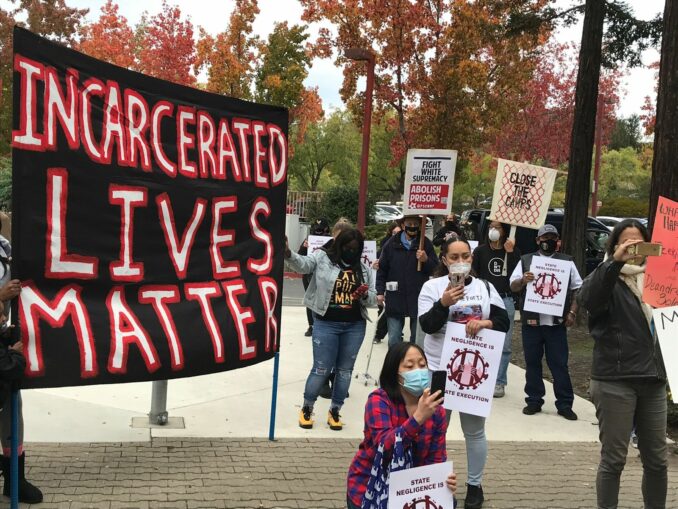 Family members and prisoners’ rights advocates gather outside the Contra Costa County Jail in Martinez to demand the release of a prisoner suffering from medical neglect during the COVID pandemic.

On Jan. 15 at the death row prison in Terre Haute, Ind., with less than a week to go of Donald Trump’s presidency, Dustin Biggs became the 13th federal prisoner to be executed under Trump’s administration. This killing spree that began in 2020 broke a hiatus of 17 years and included last Wednesday’s murder of the first woman prisoner in 68 years, Lisa Montgomery, a woman diagnosed with bipolar disorder and complex post-traumatic stress disorder.

For many of us who have spent our lives opposing the barbaric death penalty in the U.S., it was particularly painful to witness these state lynchings. Biggs, a Black man, maintained his innocence until death and was executed while suffering from COVID.

Not surprisingly, Democratic lawmakers led by Mass. Rep. Ayana Pressley and others have sponsored a bill to end the death penalty. The real question we should be asking is: Why has it taken so long for Congress to take legislative steps to end the federal death penalty? And who is responsible for the mass incarceration of poor Black, Brown and Indigenous people in the U.S.?

Just to ask the question is to answer it. While the criminal injustice system has been a tool of the entire ruling class to oppress, subjugate and murder the working class, especially its most oppressed sectors — no incoming president has done more to fill the prisons than President-elect Joe Biden. A 2015 tweet by Washington Post opinion writer Radley Balko said it all, “The martial/carceral state has had no greater friend in Washington over the past 35 years than Joe Biden.” (Vox, July 31, 2019)

Biden and the growth of the carceral state

Biden was in Congress for a very long time. He was there in the 1980s when the racist drug laws were being written and passed. Not only was he responsible for writing many of the federal laws, his voice was one of the loudest for harsher and lengthier sentences. Biden authored the 1986 and 1988 federal drug laws, containing the gross sentencing disparity between crack and powder cocaine, which opened the door to the racist prosecution and mass incarceration of Black people in disproportionate numbers.

In 1991, during a debate over a bill that eventually became the infamous 1994 Violent Crime Control and Law Enforcement Act, Biden presented a plan that was tougher and more punitive than that of then-President George Bush Sr. He bragged that his version of the bill would provide greater opportunities for federal prisoners to be sentenced to death than under President Ronald Reagan. (Vox, July 31, 2019)

This bill led to the exponential growth and expansion of the prison system in California and harsher sentences for prisoners everywhere. Naomi Murakawa, the author of “The First Civil Right: How Liberals Built Prison America,” openly stated that Biden’s efforts have made the so-called criminal justice system much larger and more deadly.

Biden played a large role in supporting the Antiterrorism and Effective Death Penalty Act of 1996, which received bipartisan support and was signed into law by President Bill Clinton. This bill, besides increasing prosecutors’ ability to sentence people to death, limited habeas corpus appeals by prisoners on death row and mandated the immediate deportation of all undocumented prisoners upon the completion of their prison terms.

So here we are again, only days away from Biden’s inauguration. Just this morning, the Federal Bureau of Prisons announced it was putting all federal prisons on lockdown, supposedly to prevent any prisoner unrest. The federal prisoners are certainly not responsible for the Jan. 6 fascist coup attempt in D.C., nor is there any evidence of an insurgence inside. This sounds like more racist scapegoating and fearmongering.

The danger to the working class rests with the new presidency of a candidate and a party which crafted a racist criminal injustice system and then funded, built and filled U.S. prisons with poor people, predominantly Black, Brown and Indigenous. Donald Trump and the Republican Party may have resurrected the federal death penalty and murdered 13 people, but the seeds of the racist, sexist, anti-LGBTQ2S+ criminal injustice system were sown as a bipartisan effort wielded by the Democratic Party. Abolish the racist death penalty — once and for all!