On Dec. 12, 2015, politicians and world leaders signed the Paris Agreement, an international pledge to reduce greenhouse gas emissions to decrease the effects of climate change. But as climate activist Greta Thunberg reported in a recent video, data shows that the past five years have been the hottest on record. (tinyurl.com/yymlgkrd) 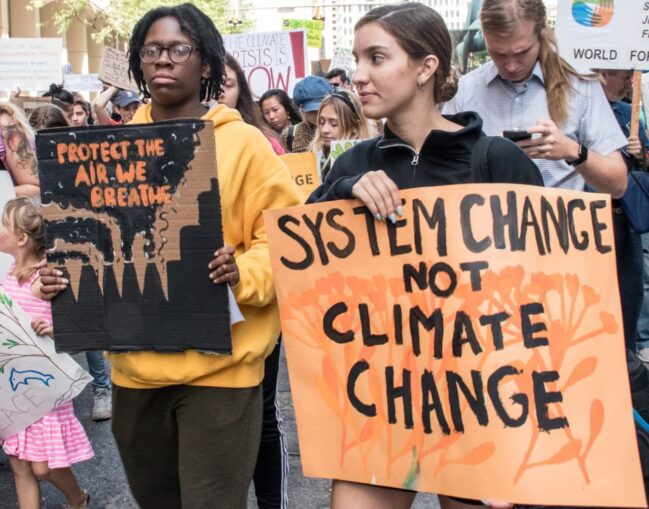 The Paris Agreement isn’t nearly enough to combat climate change to the extent necessary for the continuation of human life. It does not bode well for the accord that Exxon Mobil Corporation, which stated its support for the Paris Agreement, remains one of the world’s largest producers of greenhouse gases.

Although reducing greenhouse gas emissions is vital for human survival, the Paris Agreement is used by politicians and corporations as a facade to hide their continuous fossil fuel emissions behind the guise of green policy.

Biden’s plan to combat climate change can be described as weak at best. On his campaign website, he calls for a “clean energy revolution.” Yet much like Exxon Mobil’s “support” for the Paris Agreement, the Biden campaign’s linguistic choice is simply a facade designed to deceive the public into thinking he will fight for a liveable future for the working class.

Biden’s campaign was funded by billionaires and super PACs, meaning his vested interest is in upholding the conditions that make his donors money — capitalist conditions that exploit the working class are dangerous for the environment.

Many of Biden’s Cabinet picks were closely affiliated with Biden and former president Barack Obama during his administration, which proved weak on combating climate change. Biden’s domestic climate advisor, Gina McCarthy, is a former head of the Environmental Protection Agency, which colossally failed to respond to the Flint water crisis under her tenure.

Biden is being praised for diversity in the race and gender of his Cabinet picks, but although he may have picked women and people of color to fill his Cabinet, this diversity is simply an example of the administration obscuring its moderate policies. Biden promised a Cabinet that “looks like America,” but his catchphrases should not deceive people into thinking he’s doing what is good for us.

Biden hasn’t even signed on to the Green New Deal, which in and of itself is nowhere near enough to end climate change. Only with the abolition of capitalism can we stop the assault on the atmosphere, the oceans and all of nature.

The German philosopher Georg Hegel held that humankind is the spirit of god alienated from itself. The German philosopher Ludwig Feuerbach responded to this claim by reversing it — maintaining that god is the spirit of man alienated from itself. When humans project an idealized version of themselves into heaven and worship it as god, Feuerbach claimed, they alienate themselves from themselves.

When humans accredit human history and development to a heavenly being, as opposed to our earthly existence, we create a type of alienation — alienation from the Earth. What’s good for humans and what’s good for nature are falsely seen as separate things. This alienation of humankind from Earth is the dichotomy that justifies capitalist devastation of the Earth.

Essentially, separation from the Earth is fundamental to the conditions that created capitalism. Abolishing capitalism is coextensive with negating the alienation between human interests and the interests of the environment — of nature itself, of which humanity is part. Furthermore, Marx expanded upon this theory of Feuerbach’s and applied it to the political realm to analyze other types of alienation. One example is the alienation of workers from the labor we sell to the capitalist class.

This theoretical perspective is relevant now more than ever. Although Greta Thunberg was born more than a century after Marx died, the activist’s urgent calls to action reflect the alienation Feuerbach and Marx wrote about so many years ago.

Joining the Paris Agreement is not enough to stop climate change. Only a Marxist analysis of capitalist alienation, and subsequent struggle to negate said alienation, can reconnect humans with the Earth and eliminate the alienation between what is good for humans and what’s good for the environment.

Mayana Ashley-Carner is a student at Community College of Philadelphia and a candidate with Workers World.