So what’s it like living in the political circus of the Jan. 5, 2021, run-off in Georgia for U.S. Senate–while the deadly scourge of the pandemic rages, fear of mass evictions and the rise of poverty and unemployment grow, and incessant charges of “rigged elections” and threats of violence by Trump supporters persist alongside acts of racist state repression? 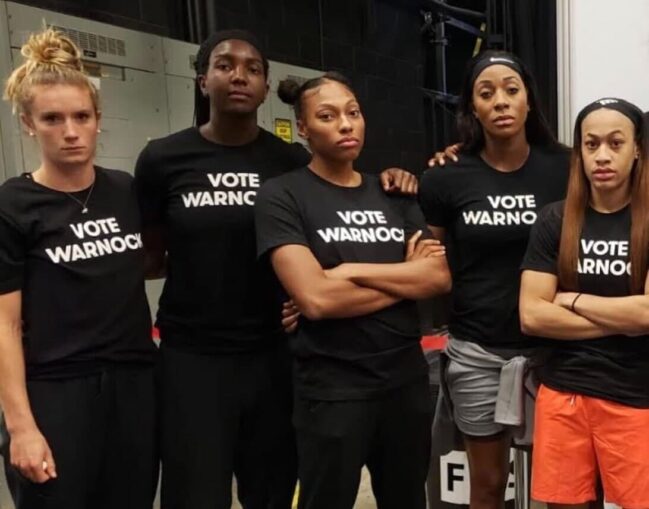 Hundreds of millions of dollars are being spent by both the Republican and Democratic parties and a multitude of Political Action Committees funded by millionaires and billionaires to support their Senate candidates in Georgia. They are described as being in a battle for control of the Senate.

On the Republican side are the current incumbents, Senators David Perdue and Kelly Loeffler.

On the Democratic Party ticket are Jon Ossoff and Rev. Raphael Warnock. The Republicans currently have a two-seat majority in the Senate. If both Democrats win, then Vice-President Kamala Harris would break any tie.

Back-to-back Republican television ads, often as many as six in a row, declare that a victory by Perdue and Loeffler will “save America” from “radical socialism.”  On the Democrats’ side, a key charge is that these two very wealthy Republican Georgia senators are motivated by personal financial gain rather than the people’s wellbeing.

It should be noted that the Senate is densely populated by millionaires from both parties, who generally get richer while in office. Loeffler, owner of the Women’s National Basketball Association’s Atlanta Dream, is the richest U.S. senator. Her net worth is estimated at $800 million, according to Newsweek. She is a virulent opponent of Black Lives Matter. Her own basketball team has come out in support of her rival, Warnock.

Perdue is a business person who had executive positions with Sara Lee Corporation, Haggar Clothing, Reebok, etc., and has made millions from those connections.

Both parties are using their traditional playbooks to appeal to their base. “Law and order” arguments from the Republicans versus the Democrats’ promises of social and economic programs characterize the media tsunami that fills our mailboxes with glossy flyers, text messages that pop up on our cell phones and a steady stream of robocalls.

Some of the more incendiary media pronouncements depend on outright lies, open red-baiting and racist rhetoric. For example, an oft-played Loeffler ad depicts Rev. Warnock as dangerous and “anti-American.” Warnock is the senior pastor of Martin Luther King Jr.’s family church, Ebenezer Baptist.

Film footage is shown of Rev. Jeremiah Wright saying “God damn America.” This quote is from a sermon denouncing U.S. imperialist wars in Vietnam, Iraq and the continued theft of Indigenous lands. The same quote was used against Barack Obama during his presidential campaign.

In another ad, Warnock is shown repeating those words while adding that America’s actions today may merit that condemnation. More footage of Warnock criticizing Israeli attacks on peaceful Palestian protesters shows him saying loudly, from the pulpit, “Palestinian lives matter.”

Perdue’s campaign features an ad declaring that Jon Ossoff works for the Chinese government, “the same Chinese government that gave the U.S. the COVID virus.” Ossoff’s documentary company was once paid for a film that aired on Chinese TV.

Other ads say that an Ossoff  victory would mean “illegal immigrants voting” and the “end of private [health] insurance.” Ossoff has criticized the Trump administration’s immigration measures. However, he has stated his opposition to Medicare for All.

On the other hand, Loeffler has entertained the support of the far-right QAnon and convicted white supremacist Georgians. And Perdue’s campaign remains plagued by investigations into his financial dealings. Both Republican candidates, during most of their public appearances with a slew of Trump political allies, including both Trump and Pence, have not worn protective masks. In defiance of public health measures, their supporters refuse to practice social distancing.

Class struggle is only alternative

Both parties employ thousands of paid staffers to coordinate their respective campaigns. However, the emergence of grassroots organizations in communities of color, among young voters, immigrants, women and LGBTQ+ groups and others to promote their demands, while participating in the electoral process, has lent a struggle aspect to what’s happening.

It was voters from many of those demographics who defeated Donald Trump in the November presidential race — although by less than 12,000 votes in Georgia. Current polls indicate a virtual tie for both senatorial seats.

In this political maelstrom, the emergence of Black women, in particular, as recognized leaders in community-based mobilizing, portends more progressive mass, class-based struggle ahead.

Joe Biden famously said during the Democratic primaries that “not much would change” in his administration. That claim is evident in the number of past officials named for positions in his cabinet. Despite a few exceptions, they are pro-business defenders of a U.S. foreign policy of war, intervention and sanctions.

What should be the strategy of the workers and poor in Georgia regarding this election? Perdue and Loeffler represent a white supremacy, anti-working class world view. Both have been Trump “America first” sycophants.

Ossoff and Warnock come from a different social and economic status and both have experience in challenging the inequities of this country. Yet both deny supporting the demand to “defund the police” and tout their working relationships with police agencies.

It is clear they can only go so far in promising to meet the needs of the people in the midst of the dying capitalist system, that puts profits first no matter how dire the situation.

As of this writing, Congress is expected to pass a $900 billion coronavirus aid bill that will include $600 stimulus checks, extended unemployment benefits until March and an one month extension on the moratorium on rental evictions.

There have been six months of inaction while over 315,000 people have died – and now every state in the country is experiencing an unprecedented surge of critically ill patients due to COVID.

Yet at the same time, both capitalist parties had no difficulty in uniting to speedily vote for an enormous military budget bill.

Continued Republican control of the Senate will be an impediment to the Biden  administration’s program of modest measures meant to stave off the growing capitalist crisis. Regardless of who win the Senate seats from Georgia, the multi-national, multi-generational, multi-gendered working class will have to unite and organize to achieve genuine workers’ democracy, equity and justice.