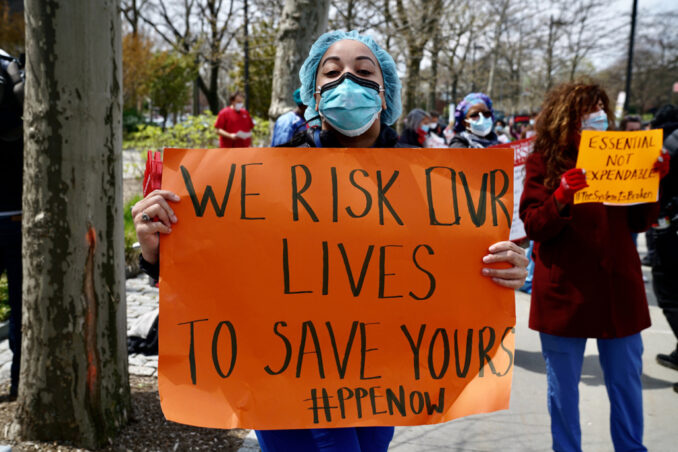 NEW YORK, NY – APRIL 17 2020: Public health workers, doctors and nurses protest over lack of sick pay and personal protective equipment (PPE) outside a hospital in the borough of the Bronx on April 17, 2020 in New York, NY.

In what can only be described as a big middle finger to healthcare workers, essential workers and all workers and oppressed persons who are rising up against police terror and fascism, the bourgeois weekly Time has named President-elect Joe Biden and Vice President-elect Kamala Harris as its Persons of the Year.

Yes, in the middle of this catastrophe, Time magazine found it appropriate to shine yet another spotlight on the bourgeois ruling class, ignoring health care workers entirely and disrespecting the historic revolutionary uprisings and mass marches that followed the murders of Ahmaud Arbery, George Floyd and Breonna Taylor.

It is easy to dismiss Time, Forbes or any sort of capitalist-funded media as “against the people” — because they are! There is no doubt that the mainstream magazines, papers and television news channels are corporate-sponsored and capitalist-funded, right down to local news stations.

One example of this in action was the 2018 appearance of Workers World Party founding member Deirdre Griswold on the television talk show of right-wing reactionary Tucker Carlson. Griswold schooled him on the Democratic People’s Republic of Korea – but most importantly, she spoke directly to millions of viewers, giving them the real story of why socialism matters. In that capitalist forum, Griswold defended a revolutionary socialist nation fighting U.S. imperialism — defended the DPRK unequivocally, as Workers World Party has always done.

In the midst of bourgeois media propaganda that champions the capitalist ruling class and spreads the lies of U.S. empire, it is a critical task of workers and oppressed persons of the world to struggle to fight for our own autonomy and self-determination in the media.

Who were the real People of the Year in 2020? Time could have shone a much-needed spotlight on healthcare workers across the country, from nurses to technicians to cleaning people, who have saved lives in underfunded hospitals with no beds and little or no PPE. Many have had to wear trash bags over their clothes! They are working grueling hours with few or no breaks, many for poverty wages. Many have died from the virus itself.

Instead, Time published a massive article on how Joe Biden and Kamala Harris “saved the U.S.” from President Trump. What that coverage glossed over is Joe Biden’s long record of building up the death-dealing military and prison-industrial complex, and Kamala Harris’ habitual mistreatment of sex workers and transgender people when she was prosecutor  and “top cop” of California.

In June 2020, Time’s cover was a photo of a Black Lives Matter uprising with the headline, “The Overdue Awakening.” The article briefly outlined the uprisings, at that point only about a month old, along with police attacks on protesters in D.C., the mass arrests, the rise of U.S. citizens beginning to understand police terror as a very real problem and, of course, how Trump and his administration were adding fuel to the fire.

The article gave an even briefer look at the U.S. history of anti-Black terror, from chattel slavery to the underlying anti-Blackness of Social Security and other federal programs, to the current prison-industrial enslavement system. After acknowledging the murder of George Floyd, the Time article ended with an ironic statement: “Awakening can be painful. But in America, a reckoning is overdue.”

Time called for a supposed “awakening.” But after a Black-led uprising brought millions and millions of workers and oppressed people — multi-gender, multinational and multi-generational — into the streets, what did this capitalist propagandist do?

The bourgeois magazine glorified as “People of the Year” two people who ran on a platform directly, explicitly opposing the uprisings. Two people who have unequivocally supported the police and condemned the protesters.

So what sort of “awakening” is really needed? What about more mass protests and actions to build solidarity with those who are saving lives in the middle of the pandemic and those who are challenging death-dealing institutions of racism and incarceration, of woman-hating and queer-phobia, of ableism and ageism.

What about an awakening to the need to defeat capitalism and imperialism and build socialism?

We as Marxist-Leninists know who the real People of the Year are — the workers and oppressed people of the world, united, who are waking up the planet!