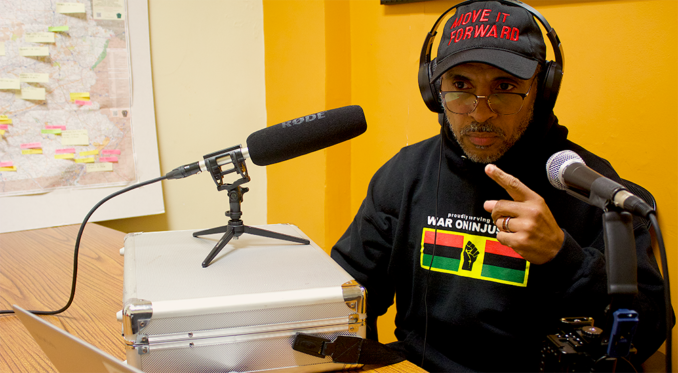 Kempis Ghani Songster co-produces the podcast “Move It Forward” which can be listened to at: transom.org/2020/move-it-forward/

These slightly edited comments are from a Dec. 10 webinar organized by the Prisoners Solidarity Committee of Workers World Party.

Co-moderator Monica Moorehead: We’re very excited to welcome to the panel Kempis Ghani Songster. He is the Healing Justice Organizer for the Amistad Law Project and the host of the new monthly podcast show, “Move It Forward.” He is also co-founder of Ubuntu Philadelphia. Our earlier panelist, Swift Justice, was speaking from an Alabama prison. What similar conditions did you experience in Pennsylvania prisons? Why should the issue of mass incarceration concern all workers? How does the struggle of people on the inside affect all of us?

Kempis Ghani Songster: Thank you for having me. As Swift Justice was talking, and I was hearing the sounds coming through his phone receiver, it brought back some visceral memories from me, some cellular memories for me, because December 28 will mark my third year back in the wide open world after 30 years of incarceration.

That began in 1987, at the age of 15, for me. I was sentenced to life without parole at the age of 15 in Pennsylvania. And in Pennsylvania, life without parole is not like life in a lot of other states, where you might serve 20 years or 25 years or any number of years, and then you’re eligible to see the parole board. In Pennsylvania, life means natural life — you’re sent to prison effectively to die. Which is why we increasingly know “life” now as “death by incarceration by the state.” Because anything so final as death shouldn’t be called life. We call it what it is — death by incarceration.

The only reason why I’m on this call with you today is because the U.S. Supreme Court made some rulings, starting on June 25, 2012, with Mila vs. Alabama, saying that it’s unconstitutional to sentence children, or people under 18 years of age, to mandatory life without parole. And because it applied to me, I was eventually resentenced. But I’m still on lifetime parole — I’m on parole for the rest of my life. So I’m not entirely free, I’m still chained to the plantation.

The ‘we’ of incarcerated people

When I speak about incarcerated people, I’m going to use the term “we.” I’m not going to say “them,” because I still feel I’m talking about me, because at any given time, I could be sent back to serve out the rest of my sentence

I really appreciate being here, with you. That’s not some trite cliché thing to say. I really appreciate it, because I know that I’m not supposed to be here. In Pennsylvania and in my prison experience, the struggle is a lot like what Swift Justice was talking about. My analysis of the situation of incarcerated workers comes from my observation, as well as analysis that was groomed by people like Karl Marx and James Boggs and C.L.R. James and Hannah Arendt.

Hannah Arendt talked about a society where exchange of products has become the chief public activity, where even the laborers — because they’re confronted with commodity owners — become owners of their own labor in a manufacturing society that judges men not as persons, but as producers according to the quality of their products. It was through that lens that I started to analyze exactly what the situation was with incarcerated workers.

And in the situation that we found ourselves, as we entered the prison gates, we were strip-searched and told to strip down and put on this new prison uniform. As we walked through our day-to-day life in prison, we began to see that, not only are we judged as nonpersons, but we’re also judged as not-producers anymore. We’re just consuming items identified by a number.

The value of work to someone inside

Too few of the people that I knew would look at their new predicament with that kind of political depth, at least initially, but unless you were the walking dead, you felt the sting of being slapped by an invisible hand entering that dreary place where everyone’s status says to them loud and clear — you have no value, you ain’t worth shit to society anymore if you ever did at all. To have your labor valued even at 19 cents an hour can seem like a saving grace. Just as having a good job in free society can do wonders for a person’s self-esteem, having a job or work assignment in prison can go a long way with helping a person preserve or regain a modicum of dignity and self-worth.

But some men behind the walls, like at the prison that I left from, we had never worked in the free world, we had been in a prison since we were children — like me incarcerated since the age of 15. So work offered people like me a sense of being grown-up and responsible, even if the wages paid were less than the allowance that our parents had given us. We still felt grown-up.

A person’s very humanity is inextricably tied to jailhouse work. And lack of family support or lack of family — because I knew people that didn’t have any family anymore — compels some people to work.

Some people at some time avoid prison jobs for as long as they can for personal or political reasons. They don’t want to participate in their own enslavement and exploitation. It’s their personal protest or resistance that always has the potential of reclaiming some proprietorship of prison labor power. These kinds of men and their stance are rendered insignificant by a population of scabs. That’s what I also experienced in Pennsylvania. We weren’t able to organize on a mass level, like we see going on in Alabama.

Family generosity allows such men, who resist by not working, to hold out for a while, but eventually they desist, and they break down and get a job. Everybody does. Well, not everybody — some people are implacable, like some of our political prisoners.

This has been what I’ve observed as the struggle of working people in the prison system, where we have 2.5 million people [in the U.S.] who are now held hostage. Not in the interest of “justice” or “public safety,” but in the interests of a handful of elite sociopathic hustlers, hell-bent on using force to squeeze and suck the last drops of use value from the bodies of Black, Brown and poor white people who have no longer any use value to the “free” world.

This has been our struggle in Pennsylvania, fighting against life without parole, which basically guarantees that [the state will] have an increasing number of permanently held people, so that they can squeeze, forever, every last drop of labor power they can  from these individuals — from us.

Prison work and the outside world

Now moving forward, I’m seeing what the relevance of our prison struggle has to do with folks on the outside. The most problematic layer of the conditions that motivated the emergence of the movement in Alabama is the level to which the prison-based economy has been assimilated into the culture of society at large.

Everybody out in society has somehow been benefiting from prison labor.

And not only has everyone in prison been participating in their own exploitation and oppression through prison labor themselves, but they’ve been enabling this country’s prosecution of endless wars — a genocide of war campaigns on other human beings and other parts of the world. Weapon manufacturers such as General Dynamics, Lockheed Martin, Northrop Grumman, Boeing — just to name a few — all depend on prison labor

Thus, imprisoned people, if they organize properly, can very well have a significant impact on this country’s ability to destroy more lands and more people.

But as the weapons industry pays politicians to stoke the flames of more and more war in order to create, maintain and grow markets for their weapons — so also they’re going to force prison labor to increase and accelerate. Because warehoused human beings are simply too valuable to release — even and especially after they educate, rebuild, rehabilitate themselves, transform ourselves.

This is why building solidarity with incarcerated workers is so important, because there is no separation between what goes on “outside” in society and what happens to incarcerated workers behind the walls. In fact, mass incarceration is this society’s response to the increased rejection of people of color and poor people from the workforce.

This is human warehousing and the beginning of the movement. One of the first steps in this movement is to interrogate our own consciousness, our own perception of the issues that we’re fighting against. And that means interrogating the language that we use, right? We’re talking on this Day of International Human Rights. We have to use language in our movement that confers humanity onto people.

So in this human warehousing, it’s crucial that we address the issue of the pandemic. Because COVID-19 behind the walls is killing people en masse. Pennsylvania prisons have turned into volcanoes of the virus; they’re epicenters of the virus. People are dying; guards are coming in and just infecting people left and right.

The U.S. is using punitive measures to address a public health crisis. And this is very, very important for the rest of us in this society, because it’s an egregious and glaring continuing crisis of human rights abuse.