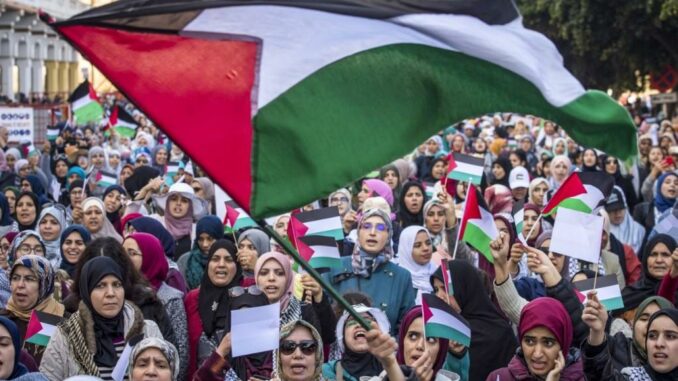 A February demonstration was held in Rabat, Morocco’s capital, in support of Palestine.

It was a deal, pure — but not so simple. The U.S. recognized the Western Sahara — the last remaining colony in Africa according to the United Nations — as part of Morocco, while Morocco upgraded its substantial economic relations with Israel to full diplomatic relations.

The Western Sahara was controlled by Spain until 1975. When Spain withdrew, Mauritania, the country lying to its south, claimed some of its southern part; and Morocco claimed about two-thirds of the northern part of the Western Sahara. The Saharawi Indigenous movement, called Polisario, demanded independence. Then followed 16 intricate years of fighting, until the U.N. established a 1991 “peacekeeping” operation.

The peace agreement between the United Arab Emirates, Bahrain and Israel, signed at the White House in September, is termed an Abraham Accord. It lays out a process of normalization between some politically conservative feudal Arab states and the Zionists who want to end their isolation. Beyond diplomatic consequences, it let Trump and the Trumpites solidify their connections to the Zionist state.

According to Axios (Dec. 10), Jared Kushner and special envoy Avi Berkowitz have tried enticing Morocco for over two years to recognize Israel in return for U.S. recognition of Morocco’s control of the Western Sahara. Since one-third of the Israeli Jews were born in Morocco and many have deep economic and cultural ties to that country, there is much support in Israel for full relations with Morocco.

But prominent Trump supporter Senator Jim Inhofe is a firm supporter of Polisario and has traveled a number of times to Algeria for meetings with Polisario leaders. When Trump and Inhofe fell out over the National Defense Authorization Act, a bill Inhofe is responsible for passing in the Senate, Trump saw he could do more than issue a few nasty tweets. He could break Israel’s isolation a bit more, tie Morocco more closely to the U.S. and let his ally, Israeli Prime Benjamin Minister Netanyahu, claim another success.

While there is a form of bourgeois democracy in Morocco — it has a prime minister, parliament, elections, judges and courts of law — the king, currently Mohammed VI, has extensive executive powers and can make decisions of state, such as recognizing the state of Israel. With a big win — getting the major world imperialist power to recognize Morocco’s hold over the Western Sahara, a goal since 1975 — he can clamp down on protests, either in the streets or in parliament.

However, there were strong prior protests against recognizing Israel when the possibility the Moroccan government would make this decision became clear. A good example was the Nov. 27 demonstration in front of the parliament building in Rabat, Morocco’s capital. (tinyurl.com/ybt93e8e)

Polisario resumed fighting in November, asserting Morocco had broken the 1991 cease-fire agreement. “Trump’s decision changes nothing in legal terms over the question of Sahrawi, because the international community does not recognise Moroccan sovereignty over Western Sahara,” the Polisario Front said in a statement to Agence France Presse. (France 24, Dec. 11)