Venezuela’s December 6 National Assembly (AN) elections overcame the prior pro-imperialist majority in that body and catapulted the ruling United Socialist Party (PSUV) into an overwhelming majority. President Nicolás Maduro, also of the PSUV, won big. 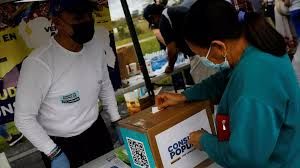 Voting is smooth and fair in Venezuela.

The imperialist politicians and corporate media, especially in the U.S., Canada and Europe, will attempt to minimize the defeat of their puppet Juan Guaidó and disparage the legitimacy of the election.

Elected from a small constituency to the last AN and appointed acting president from his party, in January 2019 Guaidó declared himself interim president of the country. U.S. and European imperialist governments quickly backed Guaidó and his fraudulent claim. They tried to mobilize all anti-revolutionary Venezuelan parties behind him.

In an attempt to unseat Maduro, Guaidó and his supporters mounted three serious maneuvers during 2019, including a barely disguised invasion over the border with Colombia. The Venezuelan armed forces backed the Maduro government, as did the popular mobilization; together they crushed these coup attempts despite U.S. backing for Guaidó.

The coup failures further split the already divided Venezuelan rightists into two major factions, both representing the oligarchy. The seditious pro-coup forces backing Guaidó were opposed by more moderate rightists wanting to work within the electoral system. They have even asked the U.S. to recognize the Venezuelan government, lift the economic sanctions and begin normal trade and investment.

Three of the four major opposition — pro-oligarchy — parties took part in the Dec. 6 elections. Guaidó refused to participate and called on everyone to boycott the election. Not everyone did.

Some 107 parties, including 97 in opposition to the government — most of them small bourgeois parties — ran over 14,000 candidates for 277 seats in the AN. Seats are distributed through a combination of direct votes for candidates and proportional representation for parties, with large voting percentages leading to overrepresentation.

The latter two are considered to the left of the PSUV. Many other parties got between 0.5% and 4.6%, but have insignificant independent political weight.

The PCV has petitioned for seven seats instead of one.

Despite the precautions for COVID-19, the vote ran smoothly, and the observers — including those from progressive organizations in the U.S. — declared it was conducted fairly and votes were fairly counted.

While there was a landslide victory for the PSUV, the strength of this victory is diminished by the relatively low level of participation, which was 31% of the eligible voters.

For a more detailed analysis of the election in English, Workers World recommends its readers listen to a podcast moderated by Margaret Flowers of Popular Resistance that features her introduction and presentations by Vijay Prashad of Tricontinental: Institute for Social Research and Paul Dobson of Venezuelanalysis. (For podcast, go to venezuelanalysis.com/analysis/15073.)

Flowers made it clear she believed the main duty of anti-imperialists working within the imperialist countries was to expose the lies and anti-Maduro, anti-revolutionary propaganda of the corporate media and to fight to get world imperialism off the backs of the Venezuelans.

Prashad discussed the full-court press attack by U.S. imperialism on Bolivarian Venezuela over the last two decades, which he called “hybrid warfare.” War is not just the physical attack,” he explained, but there is information war, diplomatic war, an attempt to isolate the enemy, economic war and war on the country’s currency. All of this has been waged against Venezuela.

The U.S. has realized, Prashad said, that while it can bomb the hell out of a country, it can’t subdue the population, thus “it can’t really win.” It tries to delegitimize the government and wage economic, commercial and financial war, creating a major currency problem, making it impossible for Venezuela to recover. “It has really screwed up the political sovereignty of the country.”

It appears as though the imperialists are doing nothing to intervene, he added, but they are really heavy on intervention. “It bleeds the country slowly and is much more devastating than direct bombardment.”

Prashad explained the low turnout not only by demoralization of the population brought out by the effects of the hybrid war, but also directly by the pandemic, which makes people want to stay home, and by calamitous fuel shortages in the midst of an election, which limit transportation to voting sites.

There’s a problem for all socialist experiments that rely on commodity prices, said Prashad. Venezuela still relies on its oil exports. When the price of oil dropped, the country lost income.

He pointed to the efforts of Vietnam to find ways of bringing capital into the country to develop domestic industry: “No country wants to socialize poverty.”

In a message to activists in the imperialist countries, Prashad urged that they tell their government to cool it and end the hybrid war.

Dobson and the critical left

Flowers pointed out that Dobson was a leftist working within Venezuela, and he would discuss internal, domestic problems and contradictions. Besides being active in Venezuela Analysis, Dobson is an active supporter of the Popular Revolutionary Alternative (APR), a new bloc of left-wing groups formed in July whose major element is the PCV and which takes a clear anti-imperialist stance on all international issues. These parties had supported the PSUV in confrontations with the rightists in past elections.

Dobson said the main question was the turnout, low for Venezuela standards. He blamed some of it on disillusionment with political leaders and argued that most Venezuelans at this time are looking for solutions to the severe economic problems. He also pointed out that there has been migration out of the country of 4-5 million voters, about 20% of the voters on the books.

Venezuela has held 26 elections since Hugo Chávez was elected president in 1998, Dobson noted. Without any evidence, the U.S., the European Union and the Organization of American States — a tool of U.S. imperialism — refuse to recognize the legitimacy of the election and call it a fraud.

Dobson discussed changes in the grassroots in Venezuela regarding government programs, saying: “We’re in the seventh year of recession;” and “The government is looking to resolve some of the problems in favor of large capital.” By this he meant that some of the sectors of the economy are being opened to privatization, without addressing the problem of low wages that are not enough to feed people adequately.

Dobson also explained that because the pro-Guaidó grouping called a boycott, it meant the PSUV would win in a landslide — as happened. That meant the parties in the APR could run independently without jeopardizing the Bolivarian government. So the APR groups withdrew their support from the government in power and publicly objected to the domestic policies of the PSUV.

There are 13 different groups on the left that make up the Popular Revolutionary Alternative (APR). The PSUV put many obstacles up to their participation. They were not allowed to participate in the national debates, and they had to run on the PCV ticket in the elections.

The APR bloc proposed a significant increase in wages, especially minimum wages, and the tying of future increases to the prices of a package of goods. They also pushed for government-planned construction of new factories to produce necessary goods. Dobson said they were pleased with the 170,000 votes that showed a revolutionary presence among the population.

For more on sanctions, see sanctionskill.org.