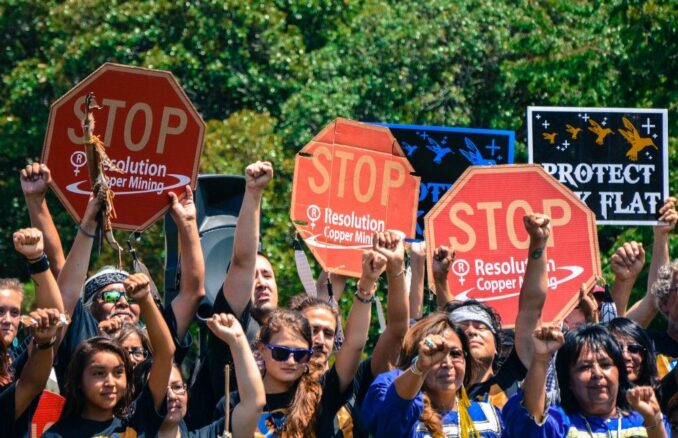 The mining was given a federal go-ahead by passage of the Southeast Arizona Land Exchange and “Conservation” Act, included in the 2015 National Defense Authorization Act signed by President Barack Obama. Subject to “environmental review,” the act gave land sacred to the Apache to the Resolution Copper Mine, a joint venture by the notorious Rio Tinto and BHP Billiton. The act was a land swap so private companies could exploit federal Tonto National Forest land, including Oak Flat, in exchange for deeding other “private land” to the U.S.

While the U.S. Forest Service had set a late 2021 deadline for the final environmental impact statement, the Trump administration recently moved the deadline to this December. (tinyurl.com/y2s2b7zk)

Arizona Congressperson Raul Grijalva told radio station KJZZ on Dec. 1 that the Trump administration is cutting corners: “They would have the deal cut [before the Biden inauguration], and it would be very difficult for us to undo after it’s done.” Rep. Grijalva and Senator Bernie Sanders have introduced legislation to repeal the land transfer.

The San Carlos Apache, neighboring Indigenous nations and environmental groups have mobilized to prevent destruction of the area, revered by the Apache.

In a November statement, Dr. Wendsler Nosie Sr., former chair of the San Carlos Apache, said: “In the days ahead, Chich’il Bildagoteel needs us. We have been given strong indication that the Forest Service will be making their decision on the Oak Flat land exchange. This will immediately begin the process of handing over a sacred site to one of the largest mining companies in the world.

“For more than a decade, people all over the world have had eyes on Oak Flat. And on the ground, countless people have been in solidarity with the Apache people as they fight to protect Oak Flat. Oak Flat needs all of us now to come together.”

To take action, go to apache-stronghold.com.