This slightly edited presentation was given by Rana Baker, a Palestinian PhD student at Columbia University, during the online Palestine Writes Festival, Dec. 5. Baker’s research focuses on infrastructure and environmental resources as micro-sites of political struggle in colonial and anti-colonial contexts. 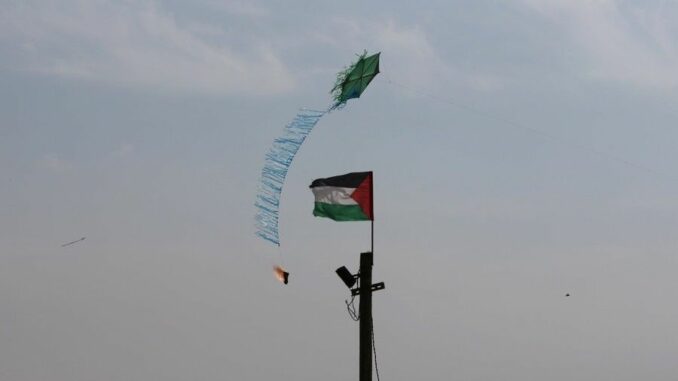 It’s a real honor to be part of this historic festival and to be among many friends and allies. I’d like to thank Susan Abulhawa and all the organizers for their tireless work and for bringing us together in the best of ways despite this pandemic.

My brief presentation will address environmental politics and the possibilities of resistance in Palestine – my primary focus is Gaza.

Over the past years, the environment became an important component of liberal discourse. Scientists are no longer the only spokespeople for the environment. Environmental politics is now a matter that concerns public opinion as well. As a self-purported liberal democracy, Israeli hasbara [public-relations] has expanded to incorporate environmental issues and to use these issues to affirm Israel’s status as a progressive state.

Of course, this idea of Israel as an environmentally conscious liberal democracy plays into Zionism’s early Orientalist narrative of Palestine as an arid land which was never cultivated by its native inhabitants until European Zionist settlers established their moshavot, or agricultural settlements. This is all well-known. 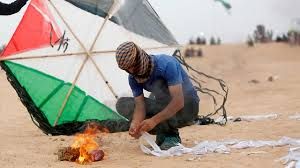 What is relatively new is the way Israel has turned the discourse of liberal environmentalism against the Palestinians who resist its colonial violence. Gaza’s incendiary kites, which emerged during Gaza’s Great March of Return [in 2018-19], are an important example. Incendiary kites or balloons were basically Molotov cocktails attached to kites and balloons, then sent over to the Israeli side, where they eventually fell and set fire to Israeli agricultural crops.

Israeli Zionist and many liberal voices accused Palestinians of “environmental savagery.” Israelis called them “terror kites.” In and of itself, Israel’s reduction of Palestinian resistance to terror is not new. What was more curious in my view was that the pro-Palestinian legal and political discourse dismissed these kites altogether and insisted on highlighting the peacefulness of the Great March.

It was as if the Great March acquired its legitimacy from its peacefulness rather the very conditions which gave rise to the March in the first place. By conditions, I obviously mean the over seven decades of Israeli violence and colonial dispossession. There are a few points I’d like to make on this.

First, while the liberal humanitarian discourse of international law can be tactically useful, I believe it is long overdue that we scholars, lawyers and activists go on the offensive. International law hardly distinguishes between a home-made incendiary kite and a bomb dropped from an Israeli warplane. Its legal principles – such as the principle of proportionality – are elusive enough to justify settler colonial violence as self-defense or, at best, provide some inconsequential condemnation.

International law has never and will never provide us with practical and discursive tools oriented toward liberation. It is not a liberatory discourse.

Home-made incendiary kites and balloons must therefore be understood as acts of creative disruption. They are effective precisely because they cause damage to Israel’s agricultural economy and pit Israeli settlers against their government. They are also effective because Israel’s military machine is incapable of neutralizing them. Israeli warplanes cannot bomb a kite since bombing them would necessarily cause damage to Israeli agricultural communities.

These acts of creative disruption must receive our full endorsement in public and private. If Palestinian resistance causes environmental damage, it is because there is an Israel to resist.

It is crucial to recognize the material nature of colonialism. Israel relies on a vast military and civilian infrastructure without which the very settler colonial integrity of the state cannot survive.

Sabotaging and disrupting this infrastructure lie at the heart of every liberation movement from North Dakota to Palestine. These are acts conducive to liberation, and we should not shy away from supporting them.