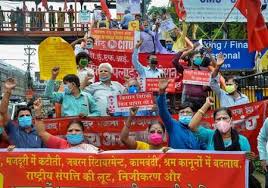 Constitution Day in India, Nov. 26, witnessed probably the biggest strike in history, with more than 250 million Indian workers putting down their tools to protest the government’s Labor Codes.

Why are the trade unions and workers angry? The Indian government, under the leadership of Prime Minister Narendra Modi’s ruling Bharatiya Janata Party (BJP), passed three Labor Codes on Sept. 23 – on Industrial Relations, Social Security and Occupational Health and Safety. These codes are pro-corporate and go against the working class; 29 hard-won labor laws have been merged into these labor codes.

The Industrial Disputes Act of 1947 required any company hiring over 100 workers to obtain permission from the local government before workers could be laid off.  This threshold has now been increased to 300 workers. Trade unions are concerned that the new laws will promote a hire-and-fire policy.

The Industrial Relations Code will also make it more difficult for workers to exercise their right to strike – they will need to give 60 days’ notice, which is more than before. This makes it harder to form unions.

The Employees Provident Fund – a form of social security — will be offered only to establishments with 20 or more workers. Instead of increasing social security and pensions for millions of unorganized workers, which has been a demand of communist parties and trade unions, it excludes social security for workers in millions of micro enterprises.

There are no provisions for the most vulnerable migrant workers. Their untold suffering from a cruel shutdown due to the pandemic, which was imposed by the Modi/BJP government with four hours’ notice in March, is well documented.

The “contract labor system” was used to exploit workers by denying them the benefits available for permanent workers during British colonial rule in India. The current regime is going to institutionalize the contract labor system, which continued after independence through fixed-term contracts, instead of creating permanent jobs. Workers can be terminated without just cause even if there is a need for their services. The government is hell-bent on destroying collective bargaining and trade unions, which currently represent less than 10 percent of all workers.

Workers in banks, transport, steel mills, ports and docks, telecommunications, plantations, power plants, mines, oil and natural gas corporations, financial services, railways, post and telegraph services, and in the unorganized sectors, participated in the Nov. 26 strike. Tens of thousands of women working as health care workers and mid-day meal cooks went on strike. The charter of strike demands included direct cash transfer to the families who earn less than the income tax threshold, food grains to those in need, and pensions for all.

The political demands included withdrawal of all anti-worker labor codes and anti-farmer laws. One of the key demands was to stop privatization of public sector units (PSUs), including those in the financial sector. India’s several PSUs continue to earn profit, regardless of what happens in the international markets. In the petroleum industry, over 90 percent of the country’s fuel needs are met by three PSUs: Indian Oil, BPCL and HPCL.

The government is trying to sell the people’s assets to Indian and multinational corporations. According to Billionaires Insights Report 2020, published by UBS and PricewaterhouseCoopers (PwC), the net worth of Indian billionaires between April and July increased 35 percent, to $423 billion. According to the Forbes’ India Rich List 2020, the net worth of India’s richest man, Mukesh Ambani, rose 73 percent over the past year, to nearly $89 billion.

On Nov. 26, the workers’ and farmers’ protests converged in solidarity when they organized the strike.

The government had passed three farm bills on Sept. 20 that will enable big corporations to directly have transactions with farmers by dismantling government-controlled agricultural markets, which procure the farmers’ produce and assure them a support price. More than 80 percent of India’s farmers are marginal and small farmers owning less than two hectares — about five acres of land. They will have very little negotiating power with the big corporations and traders.

Led by Punjab farmers, more than 300 farmers’ organizations have come together in several states in northern India and are demanding that the farm laws – which will lead to corporatization of agriculture – be repealed. As this article goes to press, close to 200,000 farmers are encircling New Delhi and are camping on the major national highways. Women farmers, Dalit (the most exploited in India’s repugnant caste system) farmers and farm labor workers, along with left-leaning Dalit unions with red flags, have joined the struggle.

Many of the demonstrations against the agricultural bills over the last several months have raised slogans like “Long live labor-farmer unity.” Historically there has been a strong opposition between the largely upper-caste farmers and the farm laborers, who are mostly landless Dalits.

Shreya Sinha, researcher on the political economy of development and agrarian change in India, writes in India Forum on Nov. 28: “Contradictions of class, caste and gender are known to undermine, if not completely paralyze, progressive agrarian politics across India. … But there is much to celebrate in the efforts of the farm and farmer labor unions and other organizations towards overcoming these contradictions. … They recognize that expanding and sustaining this effort not only needs continuous political work on the ground but also the involvement and support of other sections of society. This is reflected in the alliances they have built with other kinds of progressive organizations such as students’ unions, teachers’ unions … the forging of these solidarities not only creates hope for progressive change within Punjab but also holds lessons for social movements beyond the state.”

The farmers have called for Bharat Bandh (India Shutdown) on Dec. 8 if a special parliament session does not repeal the laws. A joint statement released by CPI, CPI (M) and CPI (ML), Revolutionary Socialist Party and All India Forward Bloc said: “The Left parties extend their solidarity with and support to the ongoing massive agitation by Kisan (Farmers) organizations from all over the country against the new Agri laws. The Left parties extend their support to the call given by them for a Bharat Bandh on December 8.”

On Dec. 5, demonstrations in solidarity with the farmers were held in the U.S., Canada, Britain and Australia.

This is indeed a very challenging yet exciting time for the toilers in India. Workers and farmers in India produce the wealth of the country, but the land and the rich resources in the country are owned and under the control of the capitalist class. Bhagat Singh, the Indian revolutionary who was hanged by the British in 1931,  wrote: “The only forces you can rely (upon) to bring about that revolution whether national or the socialist are the peasantry and the labor.”

As communists, we agree with Lenin when he said, “The struggle for land and freedom is a democratic struggle. The struggle to abolish the rule of capitalism is a socialist struggle.” (“The Proletariat and the Peasantry,” 1905)