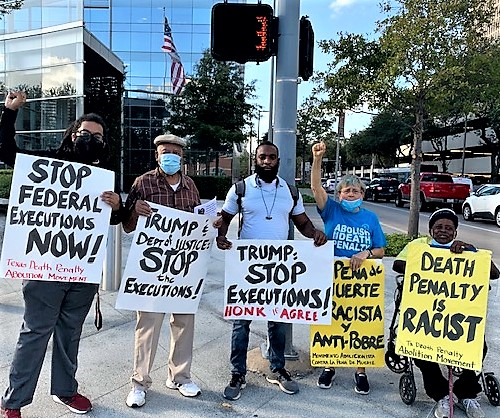 The outrage expressed by anti-death penalty activists was visceral as the news came out that Trump had authorized the federal government to use a firing squad, the electric chair, or a gas chamber for upcoming federal executions.

Ozell Brandley, the brother of Clarence Brandley, who spent 10 years on Texas death row before finally being found innocent, told WW: “A pardon for convicted administration members but death by firing squad for Blacks, Hispanics and minorities! Double standards in the criminal justice system and the White House!”

Angie Agapetus, a longtime activist with the Texas Death Penalty Abolition Movement, told WW: “Just unbelievable! Cruel to want to rush them, even as the rest of the developed world has rejected the death penalty. No decency here.”

For 17 years, no federal executions were carried out in the U.S. But in 2020 alone, the U.S. Department of Justice has executed eight people since July, and now has five more executions scheduled before Trump leaves office — four Black men and a white woman.

Brandon Bernard’s execution is set for Dec. 10, which ironically is International Human Rights Day. The next day, Dec. 11, Alfred Bourgeois is also likely be legally lynched.

In Bernard’s case, five of the jurors in his trial have now stated that they no longer think he should be executed. Also, a prosecutor who helped secure a death penalty for Bernard has said she does not now approve of him being executed.

On Jan. 12, Lisa Montgomery — a woman extremely mentally and physically damaged — is set to be murdered. Then, on Jan. 14, Corey Johnson will be next. Both Bourgeois and Johnson are mentally disabled. The U.S. Supreme Court barred the execution of people who are intellectually disabled in a 2002 decision in a Virginia case.

When Johnson was 13, he was abandoned by his drug-addicted mother to a residential facility for children with intellectual and emotional impairments, because he could not learn and because she could not cope with his significant limitations, they added.

Dustin Higgs who, like Johnson, is African American, is scheduled to be executed on Jan. 15, the birthday of Dr. Martin Luther King.  On the Civil Rights leader’s birthday, Trump will celebrate by legally lynching a man who did not kill anyone! All the witnesses agreed that the sole shooter was his co-defendant, who got a sentence of life without parole.

If all these killings take place, Trump will have abetted the execution of more people than any president in over a century. On top of that, attorneys have not been able to meet with their clients due to the COVID pandemic. The executions are to take place in the federal penitentiary in Terra Haute, Ind., where the virus is rampant.

The Justice Department is rushing to execute as many federal death row inmates as possible before Biden has a chance to reimpose a death penalty moratorium.

“The pace of these federal executions has no historical precedent,” said Robert Dunham, executive director of the Death Penalty Information Center, in a press release. “The last time more than one person was executed during a transition period takes us back to Grover Cleveland’s first presidency in the end of the 1880s.” (Nov. 30)

Independent human rights experts with the United Nations have called on the U.S. government to consider clemency for Lisa Montgomery amid concerns that she received inadequate legal assistance during her trial in 2007.

“Ms. Montgomery was the victim of an extreme level of physical and sexual abuse throughout her life against which the State never provided protection and for which it failed to offer remedies. She suffered from several mental health conditions which the State failed to care for. When it came to the capital proceedings, the State betrayed her yet again, neglecting to consider these essential and determining facts as mitigating circumstances,” the experts said in their letter. (news.un.org, Dec. 3)

Montgomery could become the first woman in the United States to die from the death penalty in 67 years.

Death Penalty Action and the Terre Haute Death Penalty Resistance will be protesting all the upcoming executions outside the prison. The Texas Death Penalty Abolition Movement will protest at the Mickey Leland Federal Building in downtown Houston.

This country was built by enslaved peoples’ labor on stolen land. After slavery was abolished, the rich plantation owners “invented” convict leasing. Prisons were established to serve the wealthy. Lynchings were the norm of the day at the turn of the last century. Today, we have legal lynchings.

Donald Trump’s current blitz of legal lynchings will only add to his long list of crimes against our class — the undocumented, women, Muslims, LGBTQ2S+ people, the disabled, people of color, workers as well as the environment.

A shameful, racist and criminal legacy.