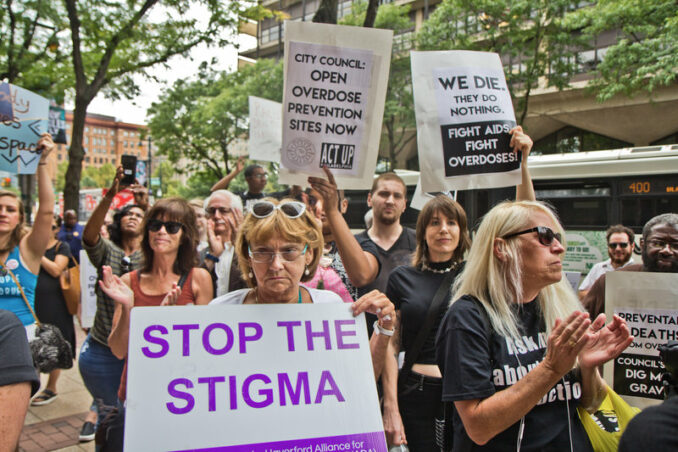 Supporters of safe injection sites in Philadelphia rallied outside this week’s federal hearing. The judge’s ultimate ruling will determine if the proposed “Safehouse” facility to prevent deaths from opioid overdose would violate the federal Controlled Substances Act.

Philadelphia has the reputation of being a major heroin haven on the East Coast, with heroin of such high quality that people moved there for that alone. In recent years, with the opiate epidemic steadily getting worse, this reputation grew — and then dropped with the introduction of fentanyl analogs — such as acetylfentanyl, butyrfentanyl, and carfentanil — into the heroin supply. These drugs are dozens to hundreds of times more potent than morphine, and dangerously taint the supply.

So it’s no surprise that the number of overdoses in Philadelphia has risen to record-breaking numbers. On sidewalks, in convenience store bathrooms, in buses, trains, and even the basements and bedrooms of their parents and partners, addicts are overdosing, dying and leaving wounds in the hearts of their loved ones.

Those lucky enough to survive a serious overdose are left changed by the experience. My most serious overdose convinced me that I needed recovery again, relapsing after three years clean. Yet overdoses may not be enough to convince some addicts that they need to seek recovery. Addiction isn’t a rational or reasonable thing – it’s a mental illness that often accompanies other mental illnesses.

People who have experienced addiction or addicts know this — many of us simply don’t understand we have a problem and often don’t know we need help until we’ve reached bottom – the point where people with substance abuse issues hit an emotional, physical, financial or social wall, realizing that we’ve destroyed our lives. It can take months or years. My first bottom came after years of using and drinking; my second came only months after my relapse. Each person is different.

Realizing that people may not hit their bottom fast enough to be able to survive addiction, recovery advocates developed ideas that would keep them alive and relatively safe until they decided to seek recovery. In the beginning, this approach took the form of harm reduction education. Recovery advocates and medical professionals educated drug users (addicts or not) in how to use drugs in ways that would keep them as safe and healthy as possible under the circumstances.

Advocates championed the use of Narcan shots and nasal spray, eventually getting the medicine to be given out without prescription and free from some pharmacies. In Philadelphia, the city and various nonprofit organizations also give trainings for free.

This harm reduction approach helped, and continues to help. However, it isn’t enough. With more and more potent fentanyl analogues being put into the heroin, someone who overdosed could need more Narcan than most advocacy civilians – and even rescue officials – could provide. So the harm reduction approach needed to get more radical.

In January 2018, reduction and recovery advocates got the City of Philadelphia to greenlight safe injection sites. While plans were not fully developed for their implementation, it was a time of rejoicing for advocates fighting addiction. Finally, evidence-based tools were starting to be used.

Yet people opposed the sites – from non-addicts antagonistic towards addicts to loved ones of addicts and even recovering addicts. The refrain was essentially the same: allow addicts in active addiction to die.

The recovering addicts and loved ones of addicts who oppose the sites generally espouse the view that safe injection only delays death and will only empower addicts to continue using.

These arguments are based in a nonscientific, discredited approach that is eugenicist and Social Darwinist in nature – the idea that only the “most fit” biologically of a species can or should survive. This leads to reasoning that addiction is a choice made by addicted people who are inherently too weak to choose recovery.

Conversations on addiction, steered by these ideas, can end up stating, directly or indirectly, that “society” is better off without people who are addicts – better off with us dead, rather than alive but using in a controlled and safe way. These arguments are also deeply rooted in the logic of capitalism – that people are worth something only as they function efficiently as working cogs in the profit-making system.

We have to reject these incorrect and malicious viewpoints and voice our support for safe injection sites, even if we are not injection drug users. We have to show that addicts — in recovery or not, abstinent or not — have value as human beings. Conversations on addiction have been steered by the devaluation of human life for too long, and too many lives have been lost to death and to jail as a result.

Safe injection sites save money but also save lives. I urge people interested in social justice and the basic concept of equality to steer discussions about addition treatment away from malicious viewpoints that degrade human value and toward viewpoints that show that all people have value.