In the U.S., with less than 5% of the world’s people, there is little concern for the fate of the globe’s other 95% who are facing the pandemic.

When, how and under what conditions a vaccine will be distributed in the U.S. is the overwhelming U.S. concern. Rates of COVID-19 deaths in the country have reached astounding levels and are still climbing. A toll of 500,000 deaths is predicted by February. 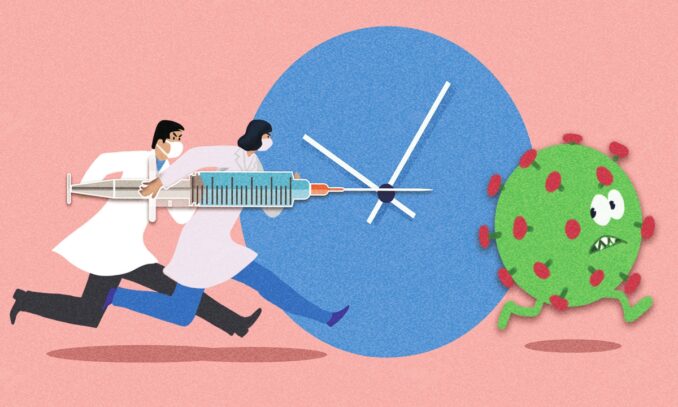 The current Washington administration has been clear that vaccines for the rest of the world will not be forthcoming until U.S. needs are met. This was reinforced by President Donald Trump at a Nov. 21 meeting of the G20, the international economic bloc of governments and central bank governors.

Meanwhile, in China the COVID-19 virus is under control. There have been fewer than 5,000 deaths. Its containment of the disease — and its centrally planned economy — has enabled China to become a force able to provide medical supplies and essential personal protective equipment on a global scale. (See “China’s socialist planning and COVID-19,” Workers World, April 3)

Now China has emerged as the one country able and willing to freely provide hundreds of millions of doses of lifesaving vaccines globally.

Chinese leaders have promised developing countries in Africa, Asia and Latin America priority access to its successful vaccines. The pledge is that China’s vaccines will be a global public health product. These are not empty promises. China has the technical ability to mass produce millions of doses and, even more importantly,  to deliver the vaccines around the world.

In a further challenge to multibillion-dollar privately owned pharmaceutical companies, China is committed to providing the technological know-how for manufacturing these vaccines locally.

Early in the pandemic, Chinese leaders repeatedly stressed that China’s vaccines were for sharing, especially with the developing world. On May 18, Chinese President Xi Jinping, at the opening of the 73rd session of the World Health Assembly, promised that COVID-19 vaccine development and deployment in China would be created for global public good. The WHA is the decision-making body of the U.N.’s World Health Organization.

On May 29, as the pandemic surged, Trump severed all U.S. ties with the WHO, with no subsequent offers of U.S. aid or cooperation in global pandemic research.

Now China’s contribution will ensure vaccine accessibility and affordability in developing countries. (tinyurl.com/y3d26p25) China also pledged $2 billion to those countries for needed infrastructure to cope with the pandemic.  (tinyurl.com/y33wfbrt)

In a June video summit with African leaders, Xi stated that “once the development and deployment of a COVID-19 vaccine is completed in China, African countries will be among the first to benefit.” (tinyurl.com/y4d34qoe) This promise was restated by President Xi at the Nov. 21 G20 summit via video.

On Oct. 8, China signed an agreement with GAVI, the Vaccine Alliance to formally join a vaccine implementation plan. This means that China’s vaccines will be a global public product and will be given priority in providing vaccines to developing countries. (tinyurl.com/y2a5zurs)

U.S. imperialism is incapable of matching China’s incredible humanitarian effort. So it is hardly surprising that China’s global aid is repeatedly criticized by U.S. corporate media and Washington think tanks.

CNN raised capitalist alarm against free distribution of hundreds of millions of vaccine doses by quoting Yanzhong Huang, a senior fellow at the New York-based Council on Foreign Relations: “The vaccines can also be used by Beijing as an ‘instrument for foreign policy to promote soft power and project international influence’ [in] vaccine diplomacy.” (tinyurl.com/y4lwv7oy)

But even while criticizing China for giving aid around the world, U.S. media have been forced to admit that China has largely eliminated the coronavirus inside its borders. Because China has essentially contained the virus, there’s no urgent need to vaccinate every person in its 1.4 billion population.

China currently has five coronavirus vaccines developed by four companies. All five vaccines have reached Phase 3 clinical trials in at least 16 counties. Phase 3 is the final test for a vaccine before it is judged to be safe for mass distribution.

The companies developing the Chinese vaccines are both state-owned public companies and private companies working collaboratively with companies around the world. Their collective goal is to guarantee large-scale production of vaccines at affordable prices, along with technology that will enable local production.

CanSino Biologics, which developed a coronavirus vaccine with a research unit of the Chinese military, will deliver 35 million doses of its vaccine to Mexico, one of 5 host countries for its trials. The prestigious international medical journal, “The Lancet” published the clinical trial data of first and second phases of that vaccine. (tinyurl.com/yd8uheb3)

Sinovac Biotech Ltd. is another China-based biopharmaceutical company that focuses on the research, development and manufacturing of vaccines. Sinovac has signed agreements with PT Bio Farma, a leading biopharmaceutical company in Indonesia, for the supply, local production and technology licensing to produce at least 40 million doses of CoronaVac there before March 2021. Sinovac is also providing 46 million doses to Brazil and 50 million doses to Turkey. (tinyurl.com/y5zz3uqk)

The state-owned Sinopharm announced on Nov. 19 that its coronavirus vaccine had been administered to nearly 1 million people with no sign of adverse side effects. (tinyurl.com/y25pgtcv)

The COVID-19 vaccines made by Chinese pharmaceutical companies are similar to vaccines effective in many other pandemics, such as polio and flu shots. These vaccines are easier to replicate with technology currently in place globally. The Pfizer and Moderna vaccines were developed using a new technology, making these vaccines more difficult to mass produce.

The Chinese vaccines have another crucial advantage: They do not require ultra-freezing temperatures for storage and shipping. To remain viable, the Pfizer vaccines must be stored at ultracold -75°C (-103°F) and the Moderna vaccines at -20°C. The Chinese vaccines require only standard refrigeration of 2°C to 8°C (36°F to 46°F).

But even a temperature that is not ultracold is a challenge to maintain in shipping and storage in large parts of the world.

Cainiao, a Chinese logistic arm of the Alibaba Group, says it now has end-to-end climate-controlled infrastructure in place and ready to distribute the Chinese vaccines worldwide. The company has partnered with Ethiopian Airlines to launch cold-chain cargo operations for the transportation of temperature-sensitive medicines from China throughout Africa and the Middle East. These new air freight flights will operate twice a week from Shenzhen International Airport to Africa. (tinyurl.com/y44u3bt7)

The new Chinese vaccines — and the pledge to share the technology and distribution with the world — is a fundamental challenge to U.S. pharmaceutical corporations. Those multibillion-dollar businesses have among the highest profit returns of any industry group. (tinyurl.com/y359jurr)

The U.S. government funded COVID vaccine research with more than $10.5 billion in grants to pharmaceutical companies. But unlike polio and earlier vaccine research, these giant private corporations will sell the publicly funded product back to government agencies at an enormous profit.

Capitalist private ownership is the biggest roadblock to solving any global problem that endangers the public good.