Essential workers at Kroger grocery stores in Houston have been campaigning for public support outside stores this fall. Kroger workers are members of United Food and Commercial Workers Local 455, which covers parts of Texas and Louisiana. 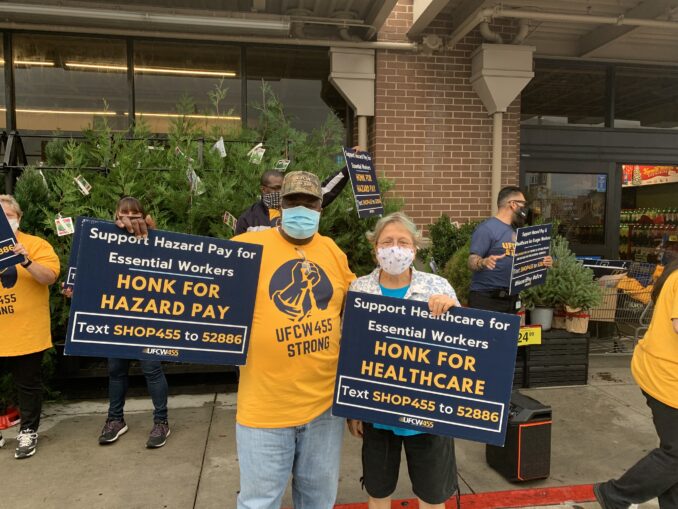 Gloria Rubac on the picket line with Kroger workers.

“Kroger is trying to take away our health benefits that we have had for over 40 years. Plus, during the pandemic, they rescinded the hazard pay we were getting,” one worker explained to this reporter. “We are still essential workers staying on our jobs during the pandemic, but Kroger is not respecting the dangerous conditions we work in. We put our lives and our families’ lives on the line every day we report for work.”

With nearly 2,800 stores in 35 states under two dozen banners and annual sales of more than $121.1 billion, the company can certainly pay their employees generously. Kroger has seen a surge in profits this year, making $1.2 billion in the first quarter. A press release Kroger put out Dec. 3 said its sales grew 10.9%, and digital sales grew a whopping 108%.

This hardly seems like a time for concern about a funding shortage, especially with something as critical as health care during a national and global health crisis like COVID-19.

According to the union, it is unacceptable that Kroger has implemented the elimination of a labor-management health care trust fund that members have counted on for over 40 years and taken away hazard pay.

A petition, which Kroger workers were asking customers to sign, states that Kroger has stripped employees of a voice in their benefits by implementing a cost shifting compensation package that only benefits Kroger.

It is appalling that a company so vast with so much wealth would take away health care from workers who are risking their health to make record profits for Kroger.

Capitalism works on the theory that workers are replaceable wage slaves, but UFCW Local 455 demands health care, hazard pay and a fair contract. They deserve it and more. We must all insist that Kroger bargain with the union and meet their just demands.