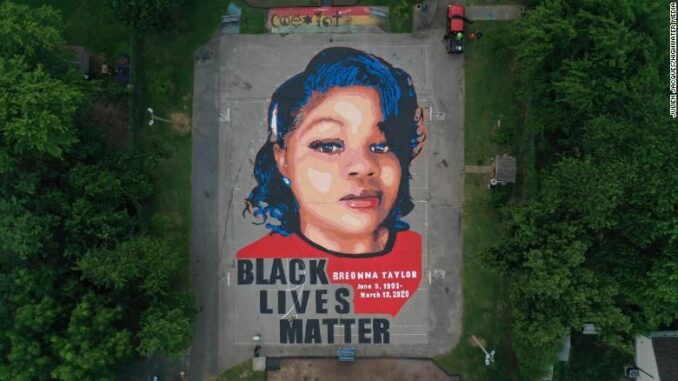 Artists and activists honor Breonna Taylor with a 7,000-square-foot mural – the size of two basketball courts – in Annapolis, Md.

Almost nine months since the senseless murder of Breonna Taylor, the struggle to win justice remains elusive but goes on. Taylor, a 26-year-old African American EMT worker, was killed by Louisville, Ky., police on March 13.

The murder of Taylor, shot six times while in her bed, gained national attention two months later, after the lynching of George Floyd by Minneapolis police on May 25.

Three white police officers used the excuse of a “no knock” warrant to forcefully gain entry to Taylor’s house with a battering ram during an ill-advised drug bust. It turned out to be the wrong house.

Taylor’s partner, Kenneth Walker, called 911 in response to the assault, not knowing that it was cops who were trying to break into the house. When Walker attempted to defend himself and Taylor, the police fired an indiscriminate barrage of shots, hitting Taylor. Then cops did not allow an ambulance to attend to Taylor for half an hour – too late to save her life.

None of the cops were arrested for any degree of murder, including manslaughter.  The only cop put on desk duty was the one whose bullets hit Taylor.

On Sept. 23, a Kentucky grand jury failed to indict the cops for killing Taylor.  Only one of the police, Brett Hankison, was indicted on a much lesser charge – for “wanton endangerment” – because his bullets struck the apartment of Taylor’s neighbors, who happened to be white.

Two of the grand jurors later publicly denounced the instructions they received from Kentucky State Attorney General Daniel Cameron, saying these did not include any options to indict the police for murder.

The lack of any serious indictment was tantamount to saying that the death of Taylor was justified.

Then, on Dec. 4, Kentucky’s nine-member Prosecutors Advisory Council voted unanimously not to hire a special prosecutor to reopen Taylor’s case. Her mother, Tamika Palmer, had made this request.

The council stated before an angry crowd of Black Lives Matter activists that they did not have the “authority” to review how AG Cameron handled the grand jury proceedings, despite concerns of two of the jurors. The NAACP Legal Defense and Educational Fund stated that Cameron had “displayed an inappropriate bias in favor of the officers.” (Washington Post, Dec. 4)

In late October it was revealed that Kentucky’s police training materials had once contained slides quoting both Adolf Hitler and Confederate General Robert E. Lee, in relation to tactics for brutally repressing anti-police demonstrations like those held to demand justice for Breonna Taylor.

Among the 33 slides in “The Warrior Mindset” for police cadets were more quotes from Hitler than from any other person, including: “The very first essential for success is a perpetually constant and regular employment of violence.” (New York Times, Oct. 31)  The slide show has reportedly been discontinued, but no one is saying how long it had been in use before it was exposed.

A lawyer, David Ward, obtained information about this slide show on behalf of the family of Bradley J. Grant, killed by a Kentucky state trooper in 2018. Grant was in mental distress when he was fatally shot. The New York Times quoted Ward as commenting: “This type of training — these quotes [from Hitler] — creates a mind set that these troopers are at war, that they need to come to work ready for battle. This type of mind set is likely to create an adversarial situation or a violent encounter, and I think that becomes even more likely when you encounter a person who is suffering a mental health crisis and is less likely to respond to verbal commands in a rational way.”

These objectionable and racist manuals are not the exception but the norm as police are given the green light to act above the law, to unleash militarized training and weaponry, especially on communities of color and workers in general.

As long as there are Breonna Taylors, George Floyds, Sandra Blands and Tamir Rices, there will remain resistance in the street, with just and justified demands to defund and abolish the police.