These two events are the latest developments in the ongoing conflict between the U.S. and China – a new Cold War being fought on many fronts, from the fields of science and technology to the ideological and military arenas.

The U.S. is attempting to maintain its faltering grip on world dominance and prevent the rise of China, which offers an alternative world order based on multilateralism, mutually beneficial economic relations, and non-interference in internal affairs. 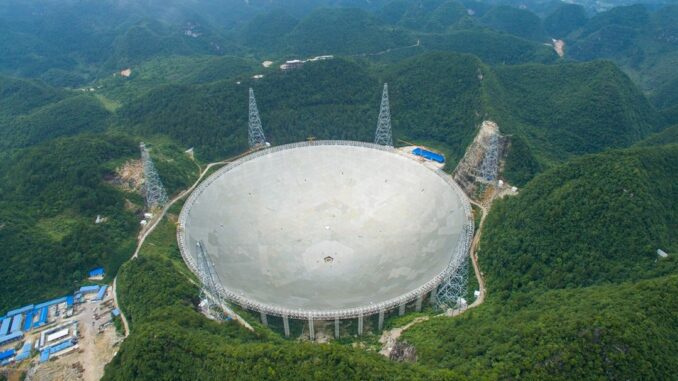 The deterioration of the U.S. as a scientific power became more stark with the collapse of the Arecibo observatory, which had become the world’s largest radio telescope when completed in 1963. It held that title for 53 years — until China’s 500-meter aperture spherical radio telescope (FAST) overtook it in 2016.

The U.S. built Arecibo, in part, to covertly locate Soviet radar bases by tracking their signals bouncing off the moon. The observatory also discovered the first neutron stars and extrasolar planets, and contributed to the search for extraterrestrial life, gathering data analyzed by the SETI (Search for Extraterrestrial Life) Institute.

Collapsing under weight of budget cuts

Beginning in 2001, Arecibo – like other publicly funded projects spanning science, health, education, transportation and welfare – saw massive budget cuts under both Democratic and Republican administrations, which pushed austerity and privatization while securing limitless budgets for police and the military.

In 2011 the National Science Foundation decertified Arecibo as a federally funded research and development center. In 2017, during Hurricane Maria, a cable snapped and fell onto the main telescope dish. Arecibo’s management changed hands again in 2018. Finally, this Dec. 1, the observatory’s 900-ton instrument platform fell onto its thousand-foot wide receiver dish, while one of the towers holding the receiver snapped in half.

The destruction of the Arecibo observatory was avoidable. The observatory could have been maintained and upgraded to prolong its mission of scientific discovery. Instead, its collapse was the result of a U.S. government that has increasingly prioritized the carceral, police, surveillance and military wings of the state.

While the loss of the Arecibo observatory is a setback for science across the globe, the world is not without a large radio telescope. China completed its much larger and more modern telescope in 2016. It is 2.5 times more sensitive than the Arecibo observatory, with a dish spanning 1,600 feet, or 500 meters. The FAST telescope, located in southwest China’s Guizhou province, cost the equivalent of $180 million. (tinyurl.com/y5kydvku)

China also spent an additional $260 million on poverty reduction in the area of the new observatory, and on helping to relocate nearly 10,000 residents living within five kilometers of the site. (Such a telescope needs radio silence, meaning there can be no nearby cell phones, televisions or radios.)

Within a year of its opening, the FAST telescope discovered its first pulsar stars, and since January has been declared fully operational. It has now discovered more than 240 pulsars, and in 2021 will open to international scientists. Scientists have already published 40 scientific papers using data collected from FAST. The telescope is also part of the SETI Institute’s Breakthrough Listen project, which represents the most comprehensive search for intelligent extraterrestrial life to date. (tinyurl.com/y3r43559)

On the day Arecibo collapsed, China’s Chang’e 5 lunar mission touched down on the near side of the moon, another scientific achievement in a long list since the founding of the People’s Republic in 1949. After launching a satellite into orbit in 1970, China built a highly advanced space program, sending more rockets into orbit than any other country. On Sept. 6, it launched its first reusable rocket, a key component of making space travel more cost effective and thus common. (tinyurl.com/yym66v4z)

Last year China’s Chang’e 4 mission became the first-ever lander to touch down on the far side of the moon. The lander included the Lunar Micro Ecosystem, a sealed biosphere that successfully sprouted the first seeds on an extraterrestrial body.

Now the Chang’e 5 mission has collected samples of lunar soil and rocks, and blasted off from the moon for a return mission to earth, scheduled for landing in mid-December. The mission makes China only the third country to collect samples from the moon, after the Soviet Union and the U.S.

China’s achievements in science and technology cover a wide area. Chinese scientists publish more scientific papers than any other country. China rapidly constructed the world’s largest high-speed rail system, which now covers over 35,000 kilometers. China has announced it will build a particle accelerator five times more powerful than the current record holder, the Large Hadron Collider. (tinyurl.com/y9zbp69d) By the end of 2020, China’s funding of research and development is set to equal that of the U.S., the world’s current largest R&D funder. (tinyurl.com/y6xzgben)

U.S. space for the super-rich

Meanwhile, the U.S. continues to slash funding for any research that won’t lead to private profits or contribute to “state security.” Private companies like SpaceX use technology developed by publicly funded agencies in their drive to commercialize space and turn it into both a playground for the super-rich and another front in imperialist conflict.

Increasingly, the U.S. has hindered its own scientific development by not prioritizing funding and resources for scientific projects, instead imposing steep austerity to satisfy the demands of Wall Street and “small government” politicians.

At the highest levels of power in the U.S., science is ignored and even mocked, as the COVID-19 pandemic has clearly illustrated. A substantial number of U.S. politicians do not accept the scientific consensus on climate change, evolution and other facts, instead opting for pseudoscience and conspiracy theories.

China’s government is filled with scientists and engineers. A 1990 study by Li Cheng and Lynn White, “Elite Transformation and Modern Change in Mainland China and Taiwan: Empirical Data and the Theory of Technocracy,” found that 80 percent of mayors and Communist Party secretaries of cities over one million people – as well as governors, provincial Party secretaries and Central Committee members – had four-year degrees or more in science- and technology-related fields. Chinese President Xi Jinping studied chemical engineering at Tsinghua University and has a degree in Marxist studies as well as a PhD in law. (tinyurl.com/y38l9dyz)

In China there is no large, corporate-backed opposition to climate science and politicians do not recklessly spread pseudoscience.

China’s large economy, with a firm foundation of publicly owned industries, can direct huge resources into scientific projects, and its Five-Year plans guide scientific and technological development to reach new heights. Its competent Communist Party embraces and promotes science not only to explore space, but also to bring the COVID-19 pandemic under control and clean up the environment for the benefit of the people.

Guided by Marxism – that is, by scientific socialism – China prioritizes social goals and directs resources in a long-term, scientifically planned manner. Through this basis in Marxism, China has been able to develop rapidly and become a global scientific leader, pushing humanity to new understandings of the universe and opening up new pathways for the future.