On Dec. 6, Venezuelans will turn out to vote in the country’s National Assembly elections, and the world waits with bated breath as observers from all over the world wait for the final results.

Election monitoring groups have made their way to Venezuela to act as impartial participants and poll observers to ensure that elections are honest and to record any irregularities which might hamper the electoral process.

One such group, the Embassy Protection Collective, whose members include Adrienne Pine, David Paul and Margaret Flowers, just recently left the U.S. for Venezuela. 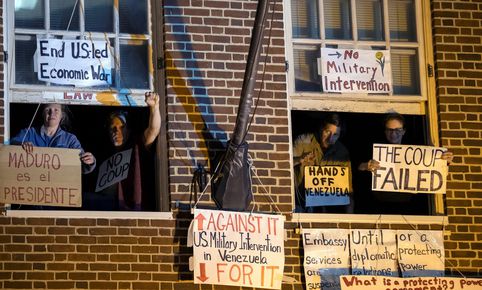 Kevin Zeese, who unexpectedly died in Sept. 2020, was a member of the Embassy Protection Collective and part of the group who stayed in the Venezuelan Embassy in Washington, D.C., to prevent the illegal handover to right-wing Venezuelan authorities and the U.S.-backed Venezuelan candidate Juan Guaidó.

Similar to President Donald Trump’s reaction to the U.S. presidential elections, Guaidó refutes the legitimacy of Bolivarian president Nicolas Maduro. The intention of the U.S. government was to hand over the Venezuelan Embassy to an opposition government-in-exile.

The United States has a long history of extending recognition to governments based on U.S.-instigated coups, and was attempting the same maneuver with Guaidó in Venezuela.

Venezuela has been mercilessly wracked by draconian economic sanctions, imposed by the Trump Administration in order to destabilize the Maduro government. Venezuela, like Bolivia, is a country rich in fossil fuels and natural resources, but the country’s elite is strongly tied to U.S. military/civilian elites.