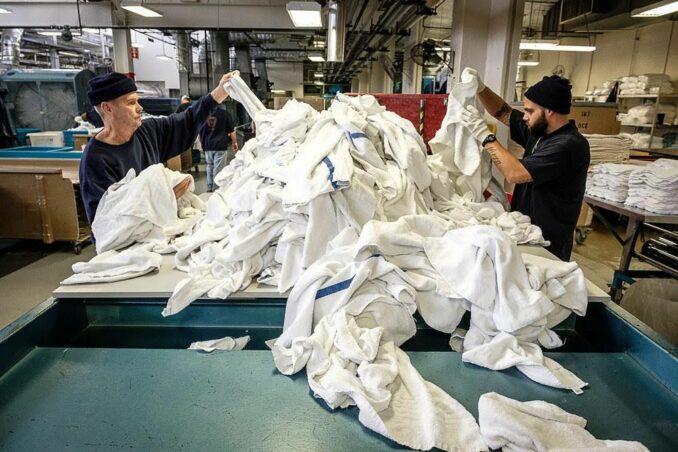 By Oregon law, prisons are workplaces. All prisoners are forced to work a 40-hour week. On Nov. 23, Snake River reported 518 infections among workers, and 157 among guards and staff.

Last year, imprisoned workers, who on average earn pennies an hour, made $28 million for Oregon Corrections Enterprises. OCE employs thousands of workers in 10 prisons, including laundries. These workers process 40,000 pounds, or 20 tons, of laundry for at least 33 hospitals each day, every day, including laundry of COVID-19 intensive care wards. They earn on average one dollar a day.

In April, Michael Zell, a prisoner at Salem, wrote that OCE bosses illegally removed biohazard labels from COVID-19-infected laundry before workers handled it. Suspecting that this illegal practice was taking place in all OCE laundries, Zell warned that the coronavirus, already raging in prisons, would increase.

Soon after, Two Rivers prison, the site of an OCE laundry with 168 workers, reported 40 new infections. Jason Ellis, a prisoner at Two Rivers, said that in spite of the spike in COVID-19 infections, laundry workers have to report for work. This was confirmed by a prison spokesperson. (streetroots.org)

The U.S. Occupational Safety and Health Administration (OSHA) regulates prison laundries, workshops, factories, call centers, and other work spaces, as well as the working conditions for those who labor in them. The U.S. Center for Disease Control provides COVID-19 protocols for workplaces, including those in prisons.

These U.S. government agencies recognize that prisoners are workers, and, as all workers, have the right to health and safety on the job. As it is for all workers, though, enforcement is another matter.

For example, Oregon Corrections Enterprises posted a notice online and in its prison laundries that “all employees and adults in custody (AICs) working in OCE laundry follow standard/universal precautions as defined by both OSHA and CDC, to wear appropriate personal protective equipment.”

However, the National Lawyers Guild states that this contradicts reality; that workers in Oregon prisons handling COVID-19-infected hospital laundry are not provided PPE, neither gloves nor masks. That, in fact, face coverings OCE provides are not PPE, but “utility masks, made of 100% cotton,” and produced by OCE garment workers.

Of the thousands of workers employed in OCE’s prison workshops, about 1,500 are highly skilled and work as upholsterers, welders, ironworkers, metal fabricators, carpenters, sewing machine operators, fabric pattern cutters, cabinetmakers and woodworkers, painters, and more. These workers are “paid” $7.25 an hour, the federal minimum wage (the Oregon minimum wage is $11.25), but they actually “take home” on average only $82 a month. The rest of their wage is taken by the state – to pay for their own imprisonment.