In early November, members of the Pennsylvania Association of Staff Nurses and Allied Professionals (PASNAP) in four Philadelphia area hospitals voted to walk out if hospital administrators did not agree to their contract demands. The 2,500 nurses at Mercy Fitzgerald, St. Mary’s Medical Center, St. Christopher’s for Children and Albert Einstein Medical Center are unified in their belief that patient safety, not profit margins, should drive how hospitals are run. Negotiations have centered around staffing ratios and retention. 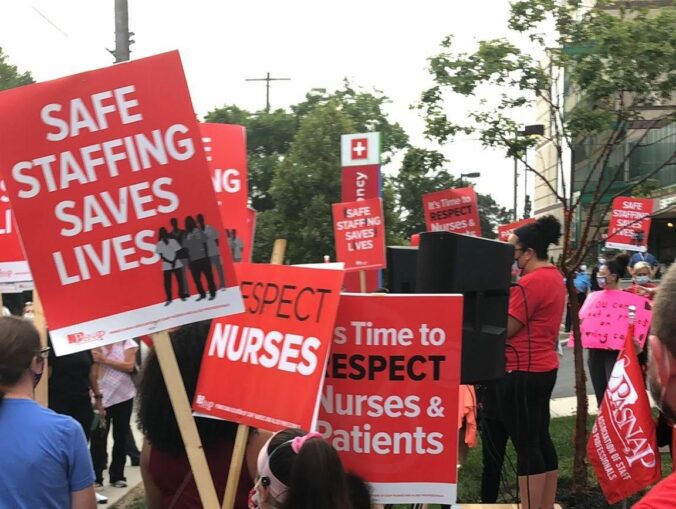 As the COVID-19 pandemic enters a dangerous upswing, these nurses know that improving staff-to-patient ratios saves lives. They have been at the frontline of the pandemic crisis from the beginning, caring for critically ill patients infected with a deadly virus that no one had seen before, let alone knew how to treat. Hundreds of nurses across the country have lost their lives providing care while wearing insufficient personal protective equipment.

Mercy Fitzgerald and St. Mary’s are owned by the Michigan-based Trinity Health conglomerate, which owns 92 hospitals across the country. Despite their nonprofit designation, Trinity has closed community-based hospitals when they are not turning a profit.

PASNAP nurses at three of the hospitals have union contracts. Mercy Fitzgerald’s four-year contract will increase the number of nurses on call as the pandemic surges. This will aid in keeping staff-to-patient ratios at a safe level. The contract also guarantees wage increases, which are critical to retaining experienced nurses and attracting newer nurses.

A balance of experienced and novice nurses ensures the transfer of knowledge and skill to a new cohort of nurses and lessens the risk of veteran nurse burnout. Contracts for St. Christopher’s Hospital for Children and Einstein Medical Center both include important successorship language, which will continue the contract in the event of a sale. This is a key victory in this volatile health care market.

When Tower Health acquired St. Christopher’s, they refused to acknowledge the nurses’ paid time off accumulated over the years under the previous ownership. Einstein Medical Center is in negotiations to merge with Jefferson Medical Center.

St. Mary’s Medical Center in Langhorne, Pa., is the only hospital of the four where nurses are working without a contract. Nurses there held a two-day strike this month. Bill Engels, one of the key strike leaders and contract negotiators, praised PASNAP for their support over the two years since St. Mary’s voted to join the union. “We were able to lean on their experience; they (PASNAP organizers) are altruistic as hell.”

The nurses’ demands center around a reinvestment in nurses as the main component of a successful hospital. Currently, on average St. Mary’s nurses make $5-6 per hour less than their area counterparts, making recruitment and retention difficult for this community hospital.

During the two-day strike, Trinity hired union-busting nurses with the help of anti-union firm Yessin and Associates at an estimated cost of $3.6 million. After the strike was over, Trinity locked out the union nurses for an additional three days. However, the St. Mary’s nurses had tremendous support from the community they serve.

They are confident that they will win when they return to the bargaining table next month. Bill Engels likens the contract negotiation to raising children. “ Having no union is like a toddler-parent relationship. Union negotiations require us to act like the teen asserting our rights and independence.” With a contract, the nurses at St. Mary’s will be on equal footing as adults with their “parent” organization.