Nov. 24 — Six workers from Houston, Texas, hired for essential repairs on storm-damaged buildings in Cedar Rapids, won their battle against wage theft with the solidarity of labor, faith and community allies.

In August, Iowa was hit by a rare hurricane-like storm known as a “derecho,” causing damage over thousands of miles. As part of the rebuilding efforts in Cedar Rapids, a crew of eight workers from Houston were hired by BluSky Restoration Contractors, LLC, and Painting and Demolition Ramirez Company to make repairs to impacted buildings.

Tasked with dangerous work in the aftermath of a storm, during a pandemic no less, the workers faced additional obstacles. The eight workers were housed in a cold apartment damaged by the storm for weeks. 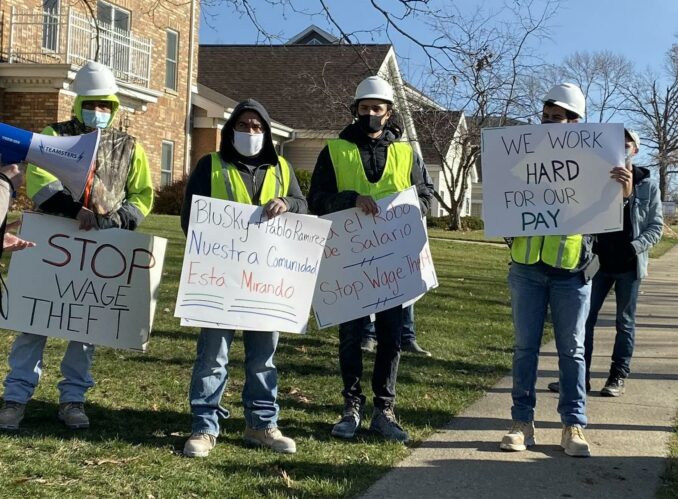 Their living conditions were described as “nightmarish” by the Center for Worker Justice of Eastern Iowa, as they were forced to sleep on air mattresses instead of beds, underneath plastic in place of a ceiling. Working long hours and with their food supply running low, the workers repeatedly asked for their pay, only to be denied and threatened with retaliation.

CWJ organizer Mayra Hernandez told Workers World, “It has often been that in the aftermath of a natural disaster, companies rush in to fulfill repair work, and there are increases in workers rights violations. The storm has made housing difficult to access and increased the opportunity for people to be housed in poor circumstances.”

After 21 days without pay, the crew members walked off the job and went on strike on Nov. 16. They were then fired and kicked out of their employer-funded housing. Two of the workers went back to Houston, while the other six remained in Cedar Rapids, stranded over 1,000 miles from their homes.

The six refused to give up, and they contacted the Laborers and Carpenters unions. The unions brought the workers food and put them in touch with local allies who rushed to their support.

“Not paying wages does not just cause economic damage,” Hernandez said. “It robs families of many opportunities, such as being able to pay for schooling, food, electricity, housing. And it robs people of their time. Wage theft is all too common. It affects parents and kids’ opportunities in life. Other states have strengthened their wage theft laws and increased penalties for violations, and we need to do that here in Iowa.”

Grace Episcopal Church provided shelter, and the Coralville Food Pantry brought them food. And the six workers were supported by community actions demanding they be paid the wages and travel costs they had been promised. In less than a week, BluSky agreed to these demands.

A rally in support of the workers scheduled for Nov. 20 was canceled after BluSky executives met with a delegation of community allies that morning. The executives agreed to expedite payments to the workers and cover their wages for completed work and travel expenses. The following day, representatives from CWJ and the Carpenters’ Union served as witnesses as the checks were delivered to the six workers.

“Workers should not have to fight for wages they earn.”

According to a Nov. 21 CWJ media advisory, “None of these actions should have been necessary. Workers should not have to fight for the wages they have earned. But when employers break the law, it is inspiring to see our community come together to make things right.”

BluSky marketing manager Lisa Tran Franco told Workers World that “BluSky leadership has made the decision to meet with individual crew members and pay them for work completed.” However, Franco did not comment on allegations that BluSky has been implicated in what CWJ calls “a pattern of failure to pay minimum wage and overtime, unlawful deductions from pay and fabricating timesheets.” In 2019, workers in Minneapolis filed an ongoing class-action lawsuit against BluSky on behalf of employees and subcontractors across the country.

“The pandemic has shown the importance of work done by underpaid workers,” Hernandez said. “Essential workers are in a vulnerable position, every day they are out there doing a job that continuously puts them at risk. Some employers can take advantage of those vulnerabilities and exploit them. Essential workers should be paid a premium, yet there are cases like this where employees are fighting to just be paid.”

All eight workers, including the two workers who went back to Houston, have now received their wages plus travel expenses.