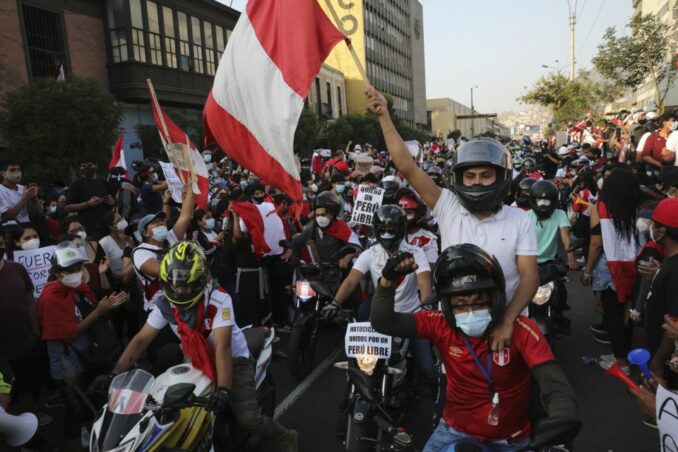 Introduction by Hildegardo Córdova-Aguilar: Peru has a population of  32 million people. Lima’s expanding urban population is approaching 11 million. Millions of workers live in places known as “asentamientos humanos” (human settlements) on the periphery of the historic city center. The settlements grew up on the sides of the surrounding hills during the massive migration and informal urbanization that began in the 1950s. Up to one-third of Lima’s population lives in precarious housing on unstable slopes vulnerable to landslides in the event of the heavy rains that will be inevitable with climate change. In the 1940s, the city’s spread began to encompass the hacienda workers who lived on the edge of the city. Then immigrants from rural parts of the country began to occupy the marginal desert terrain. The city passed legislation in 1960 to legalize the shanty towns. However, later housing developments were not protected by law or provided with infrastructure. The people were left to their own devices. In this context, the neighborhoods were identified as groups of houses occupied by populations lacking water, drainage, electricity, sidewalks, vehicular transit routes, etc.  (tinyurl.com/yyqd54at)

The economic crisis is hitting Peru hard, especially in Lima’s working class sectors called “settlements” where there are hundreds of people’s “ollas,” or food kitchens. People are also organizing to deal with the pandemic, and to face a political crisis that exploded on Nov. 9. It is a process of resistance often invisible to the big media.

The ollas have multiplied in Lima during the months of the pandemic. It is estimated that there are more than 800 in the city, principally in the poorest areas. They were created to confront the hunger resulting from the economic recession, the collapse of the informal economy and the lack of a sufficient government response to the crisis.

In the district of Independencia, in the northern part of Lima, there are 60 ollas. One of them is in the Ermitaño area on the top of the hill, where the city spreads out before our eyes and we see the splendor of the Pacific Ocean in the distance.

Zoraida Vargas Manya is standing in front of the food kitchen with about 40 people, mostly women. “We started up because of everything we are going through.  We began to meet with all the mothers looking at the need that exists here in our village,” said Vargas Manya, as the neighbors hauled 50-kilo sacks of rice for the next day’s meals.

Vargas Manya explained: “The government had said that we should not leave the house. So many people lost their jobs, and many were living from hand to mouth because they could not go outside anymore, including elders and mothers who had gone out to do their everyday work, carrying their children on their backs.

“Then came the hunger, and then the olla,” she continued. “They went everywhere asking for food: the Mayor’s Office, the Ministry of Social Inclusion and social organizations. The response has been insufficient,” says Vargas Manya. In front of the olla that feeds 150 people every day from Monday to Friday, she said, “We are all in the same situation, we are suffering for what we don’t have.”

Vargas Manya and the residents of her neighborhood joined the protests when Congress ousted President Martin Vizcarra on Nov. 9. “We didn’t agree with the removal of President Vizcarra. How can one corrupt politician depose another?” she asked, referring to the fact that more than half of the current Congress members are charged with corruption.

In Ermitaño, they banged pots. They went out to the streets in the center of Lima. “We think that the politicians are only out for their own interests.  That is what they defend. They are not thinking about us, about the people. That’s what I believe,” says Vargas Manya. She expresses a feeling that seems to be widespread among a majority of the population.

The organizing in the Independence district was done not only to combat hunger,  but it also created community anti-COVID committees.

“We are neighbors who have organized ourselves to coordinate with doctors in the health centers,” says Zulay Reinaga, an organizer of one of the eight committees in the district.

The committees were originally proposed by the Ministry of Health, but, in reality, there was none of the necessary follow through. “The Ministry proposed them, but the communities created them,” says Rafael Almonte, a Peruvian physician who received his degree in Venezuela.  He provided the training in the committees to fight against COVID-19.

In the committees, health promoters are trained in the neighborhoods to work at the primary care level and learn how to prevent the disease.  Then they explain to the community about the pandemic, how to detect symptoms and how to deal with cases working together with health centers.

The presence of the committees has been necessary, said Reinaga, particularly because of the situation in the health centers. “When we have been carrying out the campaigns, we have seen the deficiencies of the Ministry of Health and the municipality,” he said. “We have seen the limitations they have put on the health centers, which lack medicines and equipment that the personnel need to use.

The Peruvian health care system’s shortcomings are a major reason for the overwhelming number of cases, with more than 35,000 deaths, and the [second] highest pandemic mortality rate in the world.

Victoria Yépez Placencia, head of the district anti-COVID committee, called Túpac Amaru, explains: “We have developed a system to help the population because the health care system is broken.  From the beginning, no primary care was given.  There were many deaths because the state did not have the necessary measures ready,”

Medical care for all!

Placencia says one of their priorities was to go “to the high areas, which lack access to networks, to the Internet.”  There, they gave “talks in the same settlements with the mothers.  We have encountered the economic problems apart from the COVID problems; 70 percent of Peruvians are informal workers.  With everything shut down, they had nothing to eat, so they had an urgent need to create communal ollas.” [Informal workers are precariously self-employed and/or work day to day, week to week without any legal protections or benefits.]

The committees were able to carry out projects of organization and prevention, something Dr. Almonte says is strategic: “People are empowered and they want to know all about health, and health belongs to all citizens.” Coupled with that, an immediate material victory was achieved: “With social pressure we have been able to create a people’s pharmacy next to the town hall with access to cheap products.”

Erick Macías, known as Celta, is part of the Plasma Collective. He says, “We do community work in the neighborhoods, in the settlements, in the peripheral areas where many times neither the municipality nor anyone else goes.  We recover the public spaces in those neighborhoods and we activate them with art and culture.”

Celta took part in protest demonstrations after Congress dismissed Vizcarra and appointed as president Manuel Merino, who was forced to resign after five days of massive social pressure. Celta says: “I was there because, more than anything else, it should be our duty for each and every one of us to go and complain about things that we see as unjust.  What we saw in the protests was the police mistreatment of the people who were protesting. They fired weapons. People were injured, even murdered.”

After the protests, the collective decided to paint two murals in their area, Tahuantinsuyo, which is part of the Independencia district.  One mural reads “New Constitution!” and the other one reads “You messed with the wrong generation!” The second mural is a tribute to Inti Sotelo and Jack Bryan Pintado, two young people killed on Nov. 14, when police attacked the demonstration.

There are several youth collectives in the district: cultural, artistic and feminist. There are some links between them, although Celta says it is necessary to go further, particularly at a time when the role of youth — called the “failed generation” or the “generation of the bicentennial” —  has proven itself to be decisive in national politics.

Many believe that this new generation has a major role to play. Yolinda Quiquia Saez is in the same people’s food kitchen where Vargas Manya participates: “The majority of the population may not have good knowledge, but our young people are more attentive to the realities that are happening in our nation with the Congress and with so much corruption. We must give them the opportunity.”

The people’s resistance, the social organizing, has been key in confronting the overlapping crises of health, hunger and the political instability. Those who lead it have often been made invisible by the big media.  They are women and young people from the humble neighborhoods constructed on the hills by those who come from rural areas in search of work, like Quiquia Saez .

In the settlements, people despise the politicians, who campaign in the neighborhoods as candidates for office and then disappear once they are elected. For this reason, and mainly out of necessity, the people decided to organize themselves and to make demands on the state while building their responses [to the crises] independent of any institutional framework. It was the last straw when Congress impeached Vizcarra and they took over the streets and banged their pots in frustration.

The needs are great, particularly in the most neglected sectors. The ollas are overflowing with people who need food.  And there is the threat of a probable second wave of the pandemic. In this context, the new government of Fernando Sagasti — the “emergency government,” as he calls it — must succeed in providing concrete solutions. He must give political signals that show that not all political representatives, as people in that neighborhood believe, turn their backs on the people.