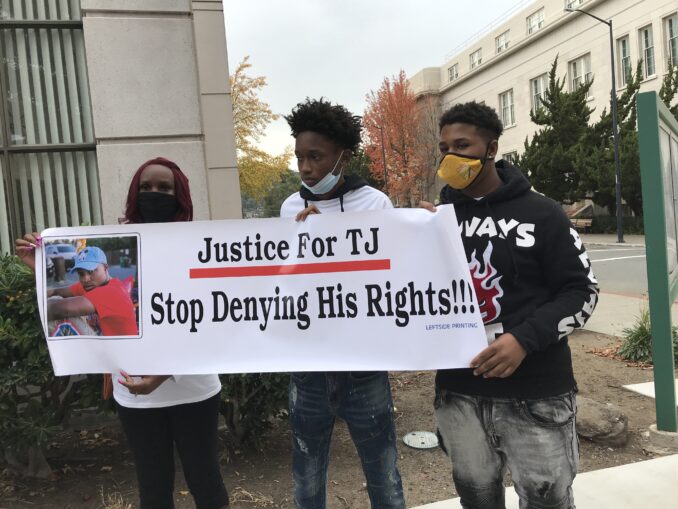 Family members, friends, social workers, teachers and prisoners’ rights advocates converged on the Martinez Detention Facility in Martinez, Calif., on Nov. 22, to demand immediate medical care for Tyejaun Shepherd, an 18-year-old Black youth who is awaiting trial. His relatives say he is experiencing stroke-like symptoms, and the Sheriff’s Department refuses to get him medical treatment. The angry group of supporters chanted, “Treat Tyejaun or release him now!”

Lavette Alexander, Shepherd’s mother, spoke outside the jail about her son’s deteriorating medical condition: “My son needs to be in an outside facility where he can be monitored, and people can really take care of him. The symptoms that he has are all consistent with a stroke. They are telling me it’s not a stroke, and that everything is fine. Everything is not fine.”

Shepherd was able to call out to the protest, but his supporters were alarmed because he had a severe stutter, was confused and could not remember some friends and family.

At the rally, Joey Villareal, a formerly imprisoned Chicano activist and radio host of Free Aztlan, exposed the prison system for its virulent racism against oppressed nations in the U.S. He described the rampant spread of COVID inside jails, where prisoners have little or no access to personal protective equipment. “Being a prisoner in the US today, all prisoners are on death row.” Pointing at the jail, he said, “All of these prisoners in this concentration camp are being held on death row, because they can die at any time. COVID is real.”

“TJ,” as Shepherd is referred to by his friends and family, was supported at the protest by his relatives, high school vice principal and social worker. There, his 12-year-old nephew, Deandra’ Williams said it best, “Free my uncle! We love you Tyejaun.”

Medical neglect is nothing new to the Contra Costa Sheriff’s Department, which is knee-deep in lawsuits, legal complaints and eyewitness reports of severe medical neglect and racist brutality against the Black and Latinx people incarcerated there.

On Oct. 1,  Contra Costa County was forced to agree to spend $250 million to increase staffing and improve health care at its jail facilities, as a result of a class action lawsuit filed on behalf of some inmates by the Prison Law Office. It alleged inmates with physical and mental illnesses were being neglected. A separate lawsuit was filed June 26 by DeAndre Bolden, a formerly incarcerated person with mental health challenges who was brutally beaten by Contra Costa deputies.