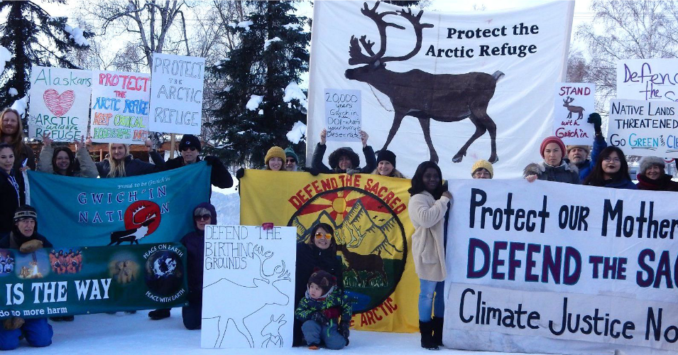 Since Nov. 7, corporate media has focused on President Donald Trump’s refusal to accept his election defeat, labeling his actions “damaging to [the myth of bourgeois] democracy.” Yet one of Trump’s few concrete actions since the election — speeding up controversial oil and gas drilling in Alaska’s Arctic National Wildlife Refuge (ANWR) — has received scant media attention even though it is more dangerous.

Right after the election, the Trump administration increased harmful seismic testing in the ANWR. Now the president is rushing to auction off drilling rights to fossil fuel companies before President-elect Joe Biden takes office, despite strong opposition from environmentalists and Indigenous communities in the region. (tinyurl.com/y6myshsz)

Since taking office in 2017, the White House has reversed or removed over 100 environmental protections and regulations designed to limit climate change and protect air and water. One of his first priorities was opening up the ANWR for potential development.

In December 2017, Congress passed the “Tax Cuts and Jobs Act” which granted the Trump administration authority to sell oil and gas leases in the refuge after a 40-year fight to prevent drilling in ANWR. The legislation opened the Arctic coast for potential development. Trump is now in a mad scramble to get sales done.

The acrimonious battle over the ANWR is one of the longest-running environmental fights in U.S. history, dating back to 1980 when Congress passed the Alaska National Interest Lands Conservation Act. While establishing the ANWR as a new national wilderness area, the act left it open to future gas exploration.

The impending auction of drilling rights pits Indigenous communities with differing interests in the area against each other — a situation oil and gas companies have long exploited. Some in the Inupiat Tribe see drilling as an economic windfall, potentially bringing jobs and infrastructure funds to very impoverished communities. For other Inupiat tribal members, and especially for the Gwich’in Nation, who are Indigenous people reliant on the annual migration of a herd of over 160,000 porcupine caribou through the region, it is an attack on their very existence.

Decades after the 1989 Exxon Valdez oil spill released 42 million liters of crude oil and contaminated 1,236.5 miles (1,990 kilometers) of shoreline in Alaska’s Prince William Sound, the environmental impact is still felt. If a major disaster — an oil spill or gas leak — were to result from drilling in the ANWR, it would devastate the only homeland for many Indigenous people.

Who stands to benefit?

The multibillion-dollar energy industry clearly has a friend in Trump. Since taking office, he lifted bans on oil and gas exploration, including in the ANWR and other parts of Alaska, in coastal waters around the U.S. and in areas formerly protected as national monuments. Trump has assisted fossil fuel infrastructure projects including the Keystone XL pipeline to bring tar sands crude oil from Canada, the Dakota Access pipeline to move oil from North Dakota oil fields and the Atlantic Coast pipeline that would transport natural gas from the Marcellus Shale in West Virginia. (brookings.edu, Aug. 4)

Now, despite years of protests, and with an energy industry facing financial decline due to overproduction plus the coronavirus pandemic, the Trump administration is speeding up the process to sell ANWR leases. On Nov. 17, the Bureau of Land Management opened 32 plots covering 1.5 million acres of the North Slope along the ANWR for drilling. Oil companies have 30 days to submit their lease bids for an auction that could occur just days before Biden takes office Jan. 20.

Even with the bids, it is not guaranteed that the environmentally dangerous drilling will take place. A number of big banks, including five out of the six biggest U.S. banks, say they will not finance new drilling in the Arctic. (Highnorthnews.com, Nov. 20) It is possible that Biden will block or reverse the sales.

What path for Biden?

During his run for the White House, Joe Biden voiced opposition to drilling in the ANWR. He also promised to rejoin the Paris [Climate] Agreement on “day one.” However, the Democratic National Committee platform stopped short of opposing fracking for fossil fuels and failed to embrace more progressive calls for immediate climate change actions.

In fact, the Paris Agreement has proven very ineffective in limiting global warming. During the 2015 Paris Climate Summit, the U.S. blocked any binding language. And it continued a provision from the 1998 Kyoto Accords that explicitly guaranteed the U.S. military exemption from any international climate agreement. With deadly emissions greater than the entire output of some industrialized nations, the Pentagon is the largest producer of greenhouse gases in the world.

Environmental activists are raising concern over Ernest Moniz, Secretary of Energy in President Barack Obama’s administration from 2013 to 2017 and potentially a top contender to lead Biden’s Department of Energy. Moniz, who supports fracking, launched the liquefied natural gas export regime under Obama.  He is currently a director of Southern Company, the second-highest carbon-polluting energy utility in the U.S. (Readsludge.com, Nov. 19)