The State of New Jersey released 2,261 incarcerated workers from its state prisons on Nov. 4. This largest single-day release in U.S. history comes on the heels of state law S2519, passed in September, which calls for the release of nearly 3,000 people in prisons to stop the rampant spread of disease inside and protect the health of the public during the ravenous coronavirus pandemic. (NBC News, Nov. 4) 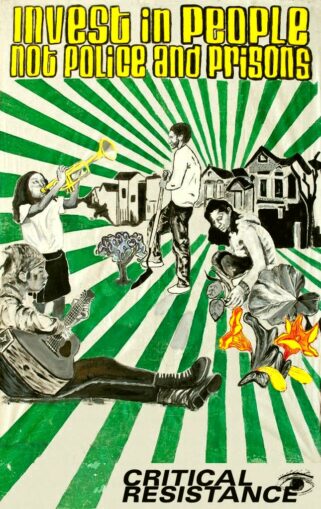 Invest in people, not police and prisons!

This release is an important win that was hard fought by various community organizations and saves thousands of lives. And, as we see this system reproducing its violence in mutated and new forms, we must be sure to fight all the conditions that have allowed the death-making policies of human captivity, trafficking, and family separation to flourish since settlers first stepped foot on the Western Hemisphere.

Whether it’s an im/migrant detention center, jail and/or prison, those walls don’t and won’t ever stop the spread of disease and death from reaching inhabitants outside walls. These cages in their various forms exist to maintain the law and so-called order of settler-imposed capitalism on stolen land, while simultaneously serving as lethal, overcrowded catch-alls for society’s contradictions.

Because prisons have been hotspots for COVID and a detriment to public health, the legislation passed in September explains that “prisoners in New Jersey within a year of completing sentences for crimes other than murder and sexual assault are eligible to be released as many as eight months early.” (New York Times, Nov. 4)

This selection – between who is granted release from their own kidnapping from their communities at the hands of police, and who is left to face a possible COVID-19 death sentence inside jail facilities —  reinforces and reproduces the myth that cages keep society safer from real harm, like murder and sexual assault. This false myth disregards the material reality that these cages reproduce murder and assault themselves, rather than addressing the root causes of these ills.

Mia Mingus, of the Bay Area Transformative Justice Collective and a fierce advocate around Disability Justice, explains: “As a survivor of child sexual abuse, working for abolition via transformative justice, more police and more prisons will not stop sexual violence. If it did, we would not have the devastatingly high epidemic-level rates of sexual violence that continue to persist.” (tinyurl.com/yy6e9rzd , June 26)

Collectively attacking cultural conditions of racism, ableism, patriarchal violence, and homophobia alongside attacking the structural conditions of housing, food and job insecurities are essential in our efforts to break free of the rot of this system, which was designed to divide and conquer.

In anticipation of these New Jersey mass releases, many volunteers and community organizers who greeted released people at bus stations used community crowdfunds to provide people with resources upon their re-entrance into society.

New Jersey “Department of Corrections” officials spoke of how folks would be released with IDs so they could pick up prescriptions and procure housing, but community organizers witnessed many left stranded during the pandemic by state neglect, without a single one of the promised resources. (WNYC, Nov. 7)

They were released without even one of them having secured a safe housing plan or a way to access resources needed to not only survive but to live safely during an unprecedented pandemic. Such a lack dooms those released to a caged future, unless members of our collective class can intervene with inside-outside solidarity.

Another related area of organized state violence we must organize against is immediate rearrests by Immigration and Customs Enforcement. ICE immediately rearrested 88 of the 2,261 people released. Although New Jersey is supposedly a sanctuary state, prisons can and do notify ICE when prisoners who have committed certain crimes, specifically related to “violent crimes” and “drug offenses,” are released.

While some of these incarcerated workers are undocumented, others are permanent residents at risk of deportation because of prior convictions. Municipal, county, and out-of-state law enforcement agencies immediately recaptured 98 additional folks of the 2,261 released. (WNYC, Nov. 5)

Cages are a form of state surveillance and death-making machines that target particular populations for genocide, and they currently serve the ruling class in their global plunder of the planet for profit over people’s lives. Documentation of criminalization across borders drawn by the imperialists precipitate punishment and a never-ending conveyor belt of vulnerability to premature death rather than any substantive change in the material conditions that had led up to the bars of a cell.

We must be sure to resist criminalizing and caging members of our class trying to survive, whether they’re using drugs or participating in sex work. We must attack harm at the root causes as we build for the presence of abolition and socialist revolution. Free them all for public health! Attack the conditions that necessitate cages! Tear down the walls!