After 170 days of uninterrupted protests against racism, fascism and police brutality, 82 percent of Portlanders have voted for a community oversight board to investigate and discipline cases of police violence. 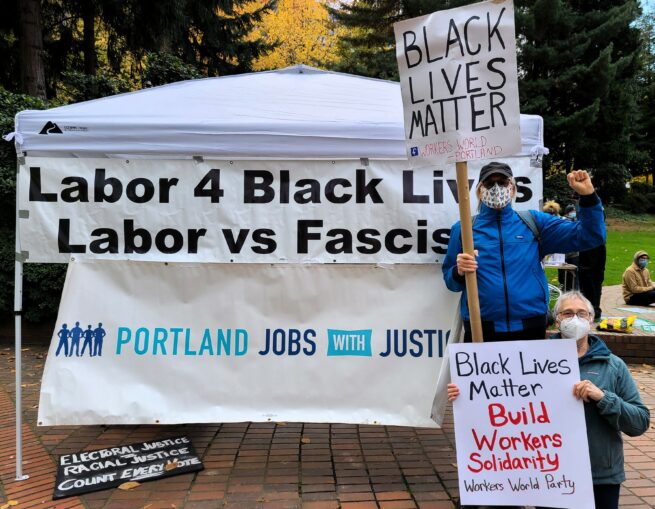 Since the brutal lynching of George Floyd, Black Lives Matter protests have finally led to this measure to partially defund the police by using 5 percent of the Portland Police Bureau’s budget to set up an independent committee. The board will “investigate police misconduct cases related to death, use of force, and discrimination — and to mandate officer discipline, including an officer’s termination, without a police chief’s approval.” (https://tinyurl.com/y537wgts)

Portland Labor for BLM Against Fascism, a newly formed group, joined the Nov. 4 “Count Every Vote” rally organized by the Defend Democracy Coalition. Hundreds of workers, unionists and unemployed people, many wearing union tee shirts, gathered at Portland’s Revolution Hall and marched across the river to Waterfront Park. They were joined by protesters from a second rally organized by the Pacific Northwest Community Action Network. Speakers addressed Trump’s attempts to sabotage the election and prevent votes from being counted in other states. Black Lives Matter demonstrators joined the rally and then marched through downtown Portland later in the evening.

Protests continued in Portland all week after the election. On Nov. 7, 300 people took part in a Black Lives Matter march called “Break the White Silence.”  Demonstrators carried signs saying “Just because Biden won doesn’t mean the job is done” and “The Vote Is Over. The Fight Goes On.”

On Nov. 8, a rally for Black Lives Matter and to defend workers’ rights ended with a silent vigil for eight minutes and 46 seconds in remembrance of George Floyd. The rally was organized by Jobs with Justice, Labor Action to Defend Democracy and the Black-led group J.U.I.C.E. (Justice, Unity, Integrity, Community, Equality).