Beloved community organizer and teacher Anthony (Ant) Smith was finally released from federal custody on Nov. 9.  “For the second time in just a few days, Ant’s defense attorney Paul Hetznecker successfully argued for his release on bail,” stated supporter Jasmine Peake-Miles. “We won the appeal, and Ant will be coming home. Let’s get ready to welcome him back!” 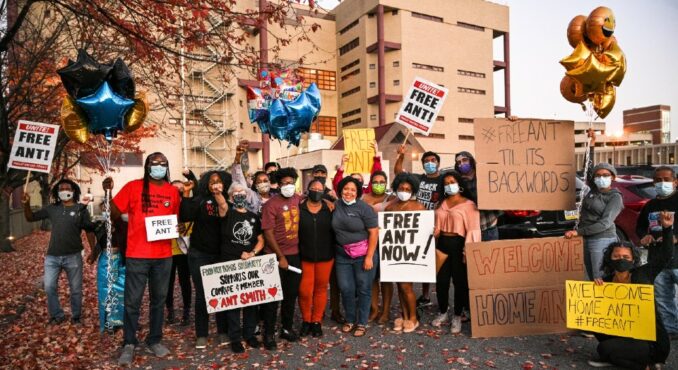 Smith was kidnapped by federal forces on Oct. 28. Acting on orders from right-wing U.S. attorney William McSwain, the feds trashed Smith’s house and terrorized his family. He was brought into custody on bogus charges related to vandalism of a cop car during a May 30 protest amid the uprisings protesting George Floyd’s murder by police.

Smith has been held in general population in Lehigh County Jail since then, over an hour outside Philadelphia. Despite the fact that a federal judge ordered his release on Nov. 6, Smith remained imprisoned in Allentown, Pa., after McSwain’s team appealed the ruling of the detention hearing in an attempt to keep Smith in custody until his trial. If convicted of arson, he faces a mandatory minimum of 7 years in federal prison.

A petition circulated by Black Lives Matter Philly, a constituent of the Black Philly Radical Collective reads, “As we await his second detention hearing, we urge the community to recommit to standing by Anthony as we continue the fight for his release. Anthony has always fought for the equitable treatment of the members of our community, and now it is our duty to stand up and fight for him.”

Supporters note that Smith is a key figure in the community, both as an activist and a teacher. Over 70 letters attesting to Smith’s upstanding character and service to the people of Philadelphia were sent to the judge prior to the ruling that ordered his release. As well as being a member of REAL Justice, Ant spends every Friday feeding people in need at 60th and Market Sts. with Food Not Bombs Solidarity. Supporters have circulated a photo of Philadelphia Mayor Jim Kenney giving Smith an award for his distinguished service to the people of the city.

William McSwain, the U.S. attorney who brought these politically motivated charges against Smith, is an ambitious and corrupt prosecutor who has been using public funds to plaster his face on billboards across the state, boasting of his “tough on crime” and “law and order” record. He regularly barges into the city to hold press conferences and claim jurisdiction on cases he deems the Philadelphia District Attorney’s office to be “too soft on.”

McSwain made the bogus claim at a press conference announcing the charges, that he did not know who Anthony Smith was before targeting this well-known activist in the midst of another uprising against police murder, this time against the murder of West Philly resident Walter Wallace Jr., who was killed by two white cops in front of his mother on Oct. 26, two days before Smith’s arrest.

Speaking at a press conference held for Smith on Oct. 30, Deandra Jefferson said, “They messed with the wrong person.”

Workers World Party welcomes the release of Anthony Smith and calls for all charges against him to be dropped immediately.