Once it was confirmed on Nov. 7 that the Joe Biden and Kamala Harris ticket had defeated Trump, literally tens of thousands of people around the U.S. spontaneously took to the streets for hours in jubilation and celebration. Not only were downtown areas taken over but also neighborhoods, block by block, where traffic came to a standstill with horns blaring.

While the majority of those in the streets were young people, all ages participated regardless of nationality, gender, gender expression and abilities. People could hardly wait to let off steam after waiting for what must have seemed like an eternity — if only five days — to see if the four-year nightmare of Trump would come to an end.

And who could blame them, for he had insulted and degraded the dignity and integrity of so many sectors of the working class inside and outside the U.S.   These include im/migrants, Black, Latinx, Asian and Indigenous communities, women, LGBTQ2S+ people and people with disabilities — anyone and everyone who has felt marginalized by Trump’s racism and misogyny felt exuberated to be seen and heard. Even other world imperialist leaders, though with a diplomatic tone, expressed relief of seeing Trump ousted. 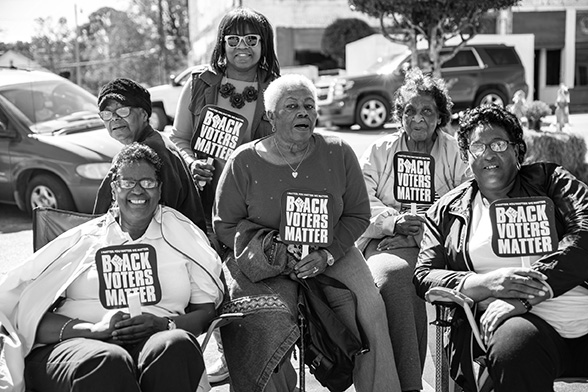 And while many carried Biden/Harris placards and waved U.S. flags, there were many carrying Black Lives Matter signs as well as carrying the names and images of George Floyd and Breonna Taylor, murdered by the police in Minneapolis, Minn., and Louisville, Ky., respectively this past spring. There were also signs saying that the election was not about Biden/Harris, but about the defeat of Trump and that the struggle will continue.

There was also the recognition of history being made with Kamala Harris being the first woman and the first woman of color to become a vice-president elect. While describing herself as a Black woman of Jamaican heritage, her family roots also come from the Indian state of Tamil Nadu. There were thousands of women, including Muslim women, carrying signs expressing equal if not more support for Harris winning than Biden.

While there was a wide gauntlet of political views of people who poured out in the streets of Philadelphia, Atlanta, New York City, Chicago, the Bay Area, Washington, D.C., Los Angeles and elsewhere, there was one view that united them all — their utter hatred and disgust for Trump.

Close to 145 million people cast votes in the presidential election with Biden/Harris winning more than 74 million, the most in any U.S. election. The percentage of eligible voters who turned out was 66.3%, the highest since the 1908 election. And more than 100 million votes were cast early, compared to 47 million in 2016. (CBS Sunday Morning, Nov. 8) Biden was able to garner more votes than any U.S. presidential candidate with the help of an additional 6 million more voters compared to the 2016 election.

The “defeat Trump” sentiment was in essence a referendum rejecting his mishandling of the COVID-19 and his white supremacy where police brutality is concerned. For months, Trump downplayed and dismissed the severity of the pandemic by speaking at ultraright-wing campaign rallies, where his supporters did not wear face masks, and there was no social distancing, until he and others in his administration tested positive. To date, close to 240,000 people have died in the U.S. from the virus.

Trump openly backed police assaults and arrests on activists in solidarity with the Black Lives Matter movement following the Floyd lynching. Every police “union” endorsed the reelection of Trump.

Following the vicious attack on demonstrators by federal troops and police in Washington, D.C., on June 1 in front of the White House, paving the way for Trump to have a photo op with a bible in his hand, it was reported that voter registration increased dramatically during the BLM-led protests.

In the first half of June, more than 1 million registered to vote, compared to 1.5 million during the whole month of June 2016. Before June 1, there had been a decline in voter registration due to the coronavirus pandemic.

According to Pew Research Center, an estimated 76% of registered Biden supporters surveyed over the summer said that racial inequality would be a determining factor on who they voted for, compared to 68% surveyed around the question of climate change as a determining factor. (Nov. 6)

The threat of voter suppression was also on the minds of these voting rights projects and rightfully so. Trump cried voter “fraud” in mainly cities like Philadelphia, Milwaukee and Detroit with large Black and brown populations who  voted early by mail to help defeat Trump. Some of his supporters went to voting centers to try to intimidate and physically stop poll workers from counting votes.

With the changing of the guard in the White House, there is the immediate question of how will Trump’s neofascist base react to the defeat, especially with his not conceding defeat? How will the workers, organized and unorganized, along with revolutionaries and socialists respond to any right-wing attacks? These questions and many more will be answered in due time.

The electoral defeat of Trump has invigorated the more than 74 million people who voted for Biden and Harris, but it can’t be discounted that 70 million people voted for Trump. What also can’t be discounted is that an election cannot vote away police terror, mass incarceration, unemployment, evictions, hunger, lack of health care and the general mass suffering of the people. Only an independent, revolutionary struggle for socialism can bring about real equality and insure all human needs are met.