Teachers, bus drivers, monitor attendants, nurses and community forces converged on the Boston School Department (BPS) on Oct. 21, intent on occupying School Committee chambers to demand an end to in-person school due to unsafe conditions in the surging pandemic. Boston police forces blocked the doors and dispersed the assembled workers, but then Boston Mayor Marty Walsh issued a hurried statement conceding to the workers’ demands.

Three weeks earlier, on Oct.1, the city’s rulers had jumped on the Trump/DeVos/Wall Street train, ordering school bus drivers and monitors to report to pick up children they deemed High In-Person Priority (HIPP). According to Massachusetts Gov. Charlie Baker and the state Department of Elementary and Secondary Education, as well as Mayor Marty Walsh, Boston School Superintendent Brenda Cassellius and the Greater Boston Chamber of 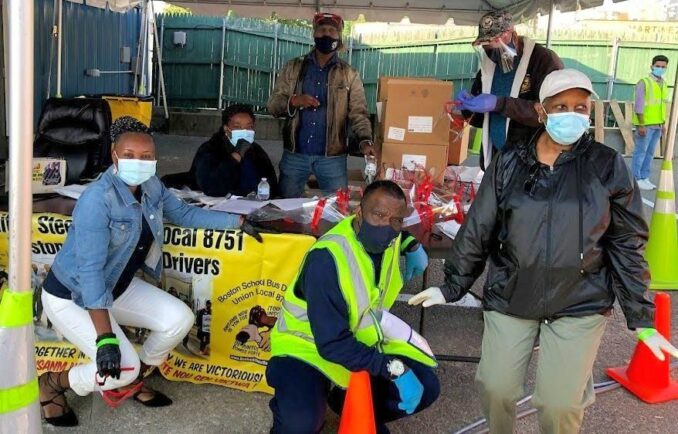 Commerce, the delivery of disabled, English-language learners and houseless children was critical to saving the downwardly spiraling economy.

“HIPP must go” joined the lexicon of ruling class COVID-19 school lingo — along with words like “hybrid,” “cohort,” “positivity rate,” and “CDC guidelines” in an ever-shifting rationale to rush back to the classroom.

However, dozens of teachers, students, parents, drivers, monitors, mechanics and food workers were falling ill inside crumbling buildings where promised PPE, filtered ventilation and other vital resources never materialized. But the judge took only 10 minutes to throw out the union’s filing for emergency injunctive relief.

United Steelworkers Local 8751 President André François, testifying for over 900 school bus drivers at a City Council hearing on Oct. 27, put it succinctly: “Transdev [bus company] and BPS’s health and safety plan was a Big Lie. Whether it was budget cuts or they just don’t care, they lied to the parents that there would be a monitor on every bus for safety. They lied that there would be proper disinfecting, testing, contact tracing for positive cases.

“In the spring, our union lost four members at work to the virus by Transdev and BPS’s negligence. There will not be one more death under the union’s watch!” (bostonschoolbusunion.org)

The school bus drivers, a majority Haitian, Cabo Verdean, Black and immigrant workforce, were in the most precarious frontline position. They had experienced deaths and many illnesses from COVID-19 in the spring after employer Transdev and city officials initially refused drivers’ demands for pandemic safety precautions. They have children, grandchildren and other relatives in need of school services themselves. 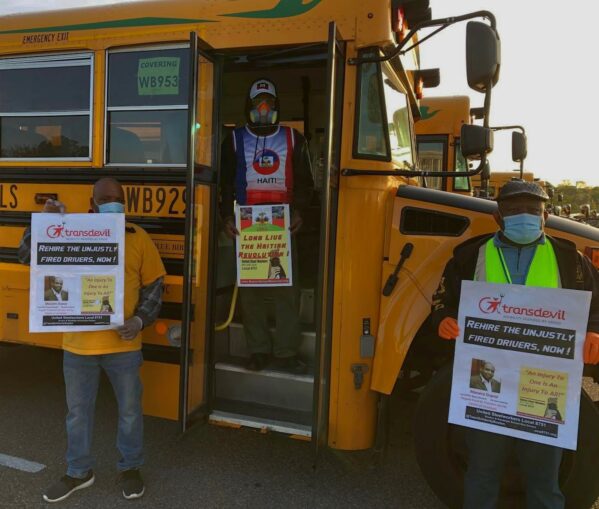 Against Transdev’s union-busting instincts, Local 8751 was able to leverage drivers’ essential role with the Mayor who, reluctantly, piece by piece, day-by-day before the Oct. 1 “reopening,” had to recognize their critical frontline labor.

To avoid a job action and bad press, he ordered the company to provide a Full Pay and Benefits agreement for September, new wage and benefit accommodations for some elders with high-risk medical conditions, paid COVID-19 sick and quarantine leave, 50 extra standby positions, and a modicum of paid COVID-19 preparation time. When limited transportation started, no driver was laid off, and every workers’ family retained some of the best union health insurance and other benefits in the industry.

Unlike teachers and other public sector school workers who work and get paid during remote learning, there is no legal requirement for employment for Boston’s privatized school bus operations. In fact, Veolia/Transdev, a billion-dollar, transnational corporation headquartered in Paris, with a $350-million sweetheart management fee from Boston, prepared to send the drivers to the unemployment line.

Given the unconscionable choice offered by their bosses – risking their lives on the job or risking their families’ homes and survival – Local 8751’s united leadership and membership said, “Hell no!” to both.

The union immediately issued Emergency COVID-19 Standard Operating Procedures and, at midnight on Sept. 30, forced the employer to agree to most of the detailed protocols before work could begin at 5:00 a.m. the next day.

Local 8751 then demanded another Full Pay and Benefits Agreement should the pandemic close in-person school, and joined the teachers’ legal and protest campaign, firing a barrage of class action Health and Safety grievances and Unfair Labor Practice charges. Street protests and media blasts were aimed at exposing the dangerous, on-the-ground truths and shutting down the transportation operation for safety’s sake.

Even with the BPS shut down, the life-or-death shop floor struggle is still hot. Transdev and Boston Public Schools continue to force drivers to work dozens of routes for private, Catholic, and charter schools – whose Wall Street and ecclesiastic headmasters, operating in direct competition to the public schools to profit off taxpayer funds, defy pandemic science.

Transdev management has hung up on Zoom calls; flown in management from around the country to harass, intimidate, and threaten drivers with discipline in the yards; hired Pinkerton-type lawyers; dragged their feet; shorted everybody’s pay; and threatened court action. But at the eleventh hour, they had to sign a third Full Pay and Benefits agreement to last through Jan. 5, 2021.

The parts of the Memorandum of Agreement that management hated the most, backed up by Local 8751’s militant history that includes 11 strikes, spotlighted the essential role of the workers, without whom the capitalist scheme collapses: “Whereas, the Union played an invaluable role in all issues related to the start-up of the school bus program, including but not limited to the bid, licensing, and communications to workforce, as well as daily operations of Boston school transportation; and

“Whereas, the Union engaged in tireless efforts to promote the health and safety of the school bus program in the interest not only of the drivers but also of the students, staff, and community, including pushing for and contributing to the policies and practices associated with COVID 19 Worksite Requirements and occurrences of COVID-positive employees in the school bus operation; and

“Whereas, the Parties are mindful of the necessity of having a ready workforce to accommodate the potential introduction of more in-school learning and the associated transportation needs;

“Should bus transportation be suspended for all or part of the driving force due to the on-going pandemic, the drivers will be paid wages in the amount that they received in the last full payroll period in which they drove their newly assigned routes.”

Dress rehearsal for shutting it down!

In thousands of skirmishes and battles in schools, districts and frontline workplaces nationwide – union and as yet unorganized – workers like Boston’s Steelworkers Local 8751 and the Boston Teachers Union are testing their power and preparing. They are dress-rehearsing, under unprecedented and dangerous conditions, to play a leading role in overcoming the deepening economic, pandemic, police brutality, and political crises to come.

On Oct. 28, Local 8751’s Executive Board and “Team Solidarity” leadership unanimously voted to join with the Rochester Labor Council, Central Wisconsin Area Labor Federation, the Southern Workers Assembly,  the Black Lives Matter movement, Indigenous Peoples Day MA, FTP Boston and all justice-loving people coast-to-coast to utilize all workers’ force necessary to stop the Trump regime’s planned attack on the Nov. 3 national elections. Already, the Trump government has utilized every dirty trick in the book – from blatant voter suppression tactics to federal troops in the streets against protesters to deadly COVID-19 denial while millions of workers are sickened or unemployed – to steal the election.

The opening lines of the union’s resolution read, “From Port au Prince to Washington, D.C., Local 8751 demands that the voices of the working class be heard and respected loud and clear. Should the racist Trump administration and its brutal police, paramilitary and Wall Street forces attempt to deny the results of the election and the peoples’ demands for COVID-19 relief, health care, housing, food, an end to police brutality, and peace, we say, ‘No Work!  No School!  No Shopping!’

“Local 8751 endorses the Freedom Fighters Coalition’s ‘Day After Election Protest’ on November 4th at 6:00 p.m. in Roxbury’s Nubian Square. We pledge to join our siblings in the streets to proclaim, ‘If we don’t get it, Shut. It. Down!’”