Oct. 23 – The chant of “Self-defense is not a crime! Free our sisters doing time!” rang out at the Kern County Superior Court Building today in support of two women who defended themselves and their families against abusive partners.

The domestic violence survivors, formerly incarcerated people, prison abolition activists, clergy and family members converging on the courthouse were there in support of Wendy Howard, a white woman facing first-degree murder charges for killing her abusive partner, and Michaele Bowers, a Black woman incarcerated since February 2017 for defending herself against her abuser. 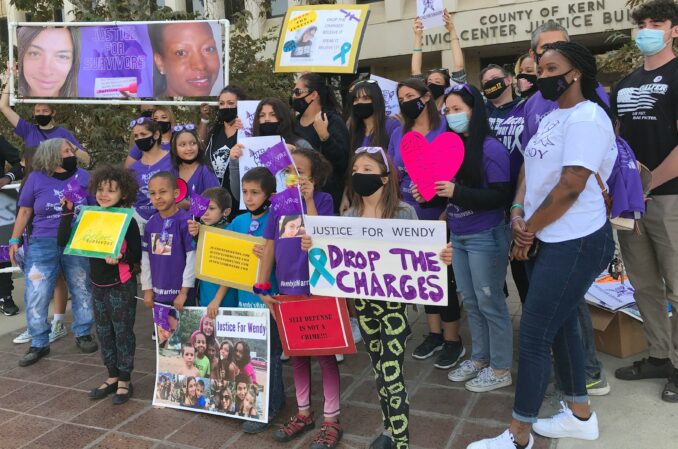 ‘Free our sisters!’ was the chant of a Bakersfield, Calif., crowd rallying on Oct. 23 for two women who protected themselves and their families against domestic violence. Credit: WW Photo: Judy Greenspan

Howard — a mother, grandmother and community leader in Kern County — was not able to speak at the rally due to a court “gag order.” She was represented by friends and several of her children, who wore pictures of their mom with the words “Justice for Wendy.” Oldest daughter Miranda spoke about the violence the family had suffered and why they feel Howard should not be incarcerated for defending herself and her daughters against physical abuse.

A coalition group supporting both cases is Survived and Punished, based in Los Angeles. Several members spoke at the rally on behalf of both women. Alisa Bierria linked the struggle of battered women to the Black Lives Matter Movement, saying: “We are here to win justice for Michaele Bowers and Wendy Howard. … Remember that Black Lives Matter includes Black lives who are domestic violence victims.”

Bierria added, “‘Say Her Name’ for all the Black women whose lives have been lost by police violence, and also for all those Black women who are still alive but are not with their families because they have been targeted and criminalized and incarcerated.”

After the speakout, the group rallied at the office of District Attorney Cynthia Zimmer, who is prosecuting the cases. There people took out their cell phones and dialed Zimmer, demanding she drop all charges against Bowers and Howard. “Drop the charges now!” rang out through the day.

The rally was scheduled to coincide with a hearing for Howard, whose trial is now postponed to the end of March 2021. She remains free on bail until then but under the shadow of a possible sentence to life in prison.

While Howard was in the Kern County Jail, she met Bowers and other women facing similar charges. Now Bowers and Howard are both fighting to drop the charges and to educate the community about the rights of domestic violence survivors.

The protest – during the Domestic Violence Awareness month of October – was organized and coordinated by No Justice Under Capitalism, a Bay Area coalition protesting conditions inside prisons for people with COVID, and Survived and Punished, which supports incarcerated women and trans people inside women’s prisons.

For more information, check out the toolkit and the press release from Domestic Violence and Prosecution of Self Defense Toolkit prepared by NJUC.