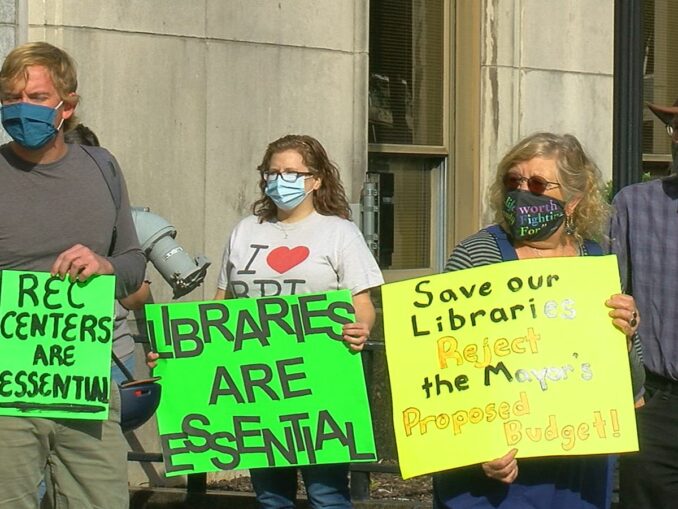 Librarians protest in Birmingham, Ala., Sept. 22.

Protesters arrived at the Birmingham City Council meeting on Sept. 22 to challenge the city’s drastic budget cuts. They were promptly banned from speaking at the meeting or even entering the building. They remained outside chanting and calling out for Mayor Randall Woodfin and the council people to rethink the budget. But the ruling class leaders three floors up ignored their chants and continued busily gutting social services necessary for the city’s people.

Woodfin, a Democrat, ran under arguably the most progressive agenda a mayoral candidate in the city had ever proposed — and won. He has now let his true capitalist colors show — gutting Birmingham’s public libraries and promising a massive increase to the police budget.

On Sept. 25, over 150 library workers were laid off or furloughed from the city’s library system. Woodfin has adamantly refused to address any pushback from citizens.

When asked what this means for the city, Jamie Foster of People’s Budget Birmingham told WW: “There are only 11 to 12 librarians still employed in the entire Birmingham Public Library system, which was the largest library system in Alabama until now. The Eastwood branch in District 2 has closed permanently, and the libraries still open have rotating days and hours for limited services. Curbside service is severely limited and even nonexistent in some places. There is no date set for furloughed workers to return to work.”

Although there is no confirmation from the city, many people in the Birmingham area believe that shuttering libraries and library services is just another step in Birmingham’s goal to privatize public services.

When asked about this, Foster commented further: “Our city has recently privatized a majority of our financial department, and the mayor recently proposed privatizing public waste and refuse services under the guise of ‘cost savings and efficiency.’ From what we currently know, Woodfin’s administration is looking into further privatization of public works and services, under the false pretenses of economic savings due, in part, to the COVID-19 pandemic.”

What is not being gutted and reduced due to “economic savings” is the Birmingham police budget. Local residents Rachel Crisson and Hannah Hurley reported to Workers World that Woodfin has approved an increase in the police budget of over $11 million for more surveillance equipment, guns and resources to terrorize the working and oppressed persons of Birmingham.

Meanwhile, the library budget was cut from $15.3 million to $6.2 million. The city council informed the library administrators that what remained of the new budget, $3.6 million, must last until the end of this year.

Critics of libraries often cite the rise of for-pay ebooks and online courses as rendering libraries obsolete, but libraries are public institutions of knowledge. Public libraries must be fully funded and remain open to meet the needs of those most oppressed, who have the least access to information necessary to assist in survival and mount resistance.

What is not needed is an increase in an increasingly reactionary police state. The attack on people’s needs in the current Birmingham budget is a prime example of how liberalism, no matter how “progressive” its mask, is ultimately an exploitative capitalist machine.

Meanwhile, Birmingham library workers and community allies continue to organize and fight back. Defund the police! Re-fund the libraries!

Devin C, a transgender Marxist organizer and writer, is president of Strive (Socialist Trans Initiative) and a founder of the Workers World Party-Central Gulf Coast branch.