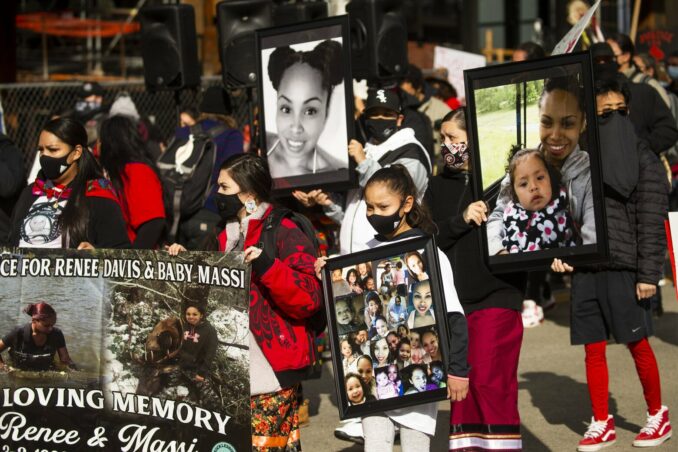 On Oct. 24, 200 people marched through downtown Seattle to demand “Justice for Renee Davis and baby Massi.” The Indigenous-led march marked the fourth year since Davis of the Muckleshoot Nation was murdered by King County sheriffs on the Muckleshoot Reservation near Seattle.

The multinational march demanded justice for, and honored, Indigenous and Black lives. The rally and march included drummers, dancers, canoe families and ceremony along with speakers.

The murders and disappearances of Indigenous women constitute a worldwide crime perpetrated by the system of capitalist colonialism. According to the Urban Health Institute’s 2018 report, there were 5,718 reports of missing U.S. and Alaskan Native women and girls in 2016.

Rally leader Roxanne White pointed out that Seattle has the highest rate of this anti-Indigenous violence in the U.S.

Donney Stevenson, Vice-Chair of the Muckleshoot Tribe, told the crowd, “No longer is it okay for our people to be marginalized. We come from a culture of warriors. We are standing up to say enough is enough!” Katrina Johnson spoke in strong solidarity with Renee Davis. Cops murdered her cousin Charleena Lyles, a Black mother of three children. (tinyurl.com/y39tmrlp)

Davis, a mother of three daughters, was murdered by the cops while pregnant with her child Massi. The county cops were asked to do a wellness check on Davis at her house. But the cops, Timothy Lewis and Nicholas Pritchett, burst into Davis’ house and shot her numerous times while she was lying in bed. (tinyurl.com/y2gh6uje) This is exactly what racist cops did to Breonna Taylor, a Black health care worker, in Louisville, Ky.

Renee Davis, who was learning the Coastal Salish language, was honored as a mother, a cultural advocate, a hunter and a fisher.