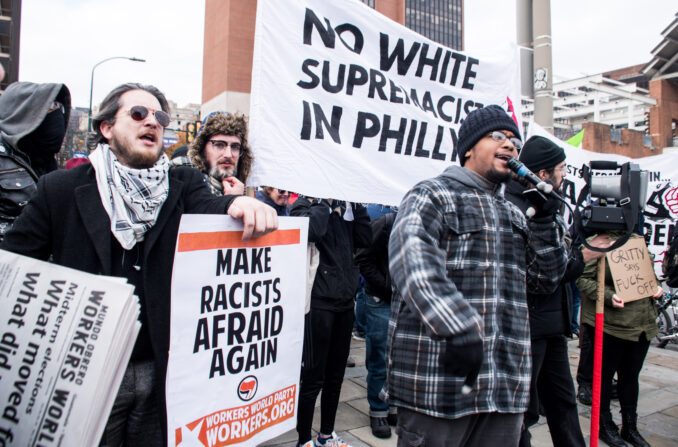 Twice – on Nov. 17, 2018 and on Sept. 19, 2020 – when the far-right Proud Boys announced plans to demonstrate in Philadelphia, thousands of anti-racist activists turned out to tell them: “You are not welcome in our city!”

To avoid another such confrontation, on Sept. 26 members of the hate group gathered in a Walmart parking lot in South Philadelphia, with no previous public notice. They were escorted by a large police caravan as they marched through Center City wearing body armor and helmets and yelling at onlookers.

The fact that other law enforcement agencies have flagged the routinely violent Proud Boys as extremists did not seem to matter to Philadelphia police. Several police buses and vans accompanied the group back to the Walmart lot, where Proud Boys and an officer were observed shaking hands. (The Daily Beast, Oct. 16)

Philadelphia Police Commissioner Danielle Outlaw denied that police had provided an escort to the group.  However, she has a history of allowing police collusion with fascist groups. Prior to coming to Philadelphia in early 2020, Outlaw served more than two years as police chief in Portland, Ore.  During her tenure there, public records obtained by Willamette Week exposed months of friendly text messages between a Portland police bureau officer and Joey Gibson, the far-right leader of Patriot Prayer, in which legal and tactical information was shared. (The Guardian, Feb. 15, 2019)

Three days after the Proud Boys march, during the presidential debate on Sept. 29, Donald Trump told the group to “stand back and stand by.” Complaining that “bad things happen in Philadelphia,” he explicitly called on his followers to show up at polling places.

Many are concerned that, because of their friendly relationship with the Proud Boys, Philadelphia police will do little to prevent any racist attempt at voter intimidation. During the months of Black Lives Matter protests following the police murder of George Floyd in Minneapolis, there were at least two incidents in which Philadelphia police openly sided with white racists who were wielding bats and other weapons against protesters.

Ten members of the Proud Boys were photographed attending a rally for Vice President Mike Pence at the North Philadelphia headquarters of the Fraternal Order of Police (FOP) on July 9. After the rally, they were witnessed at a party inside. Later, on Twitter, they claimed to have spent $1,000 at the FOP bar that night. (Daily Beast, July 16).

Given the racist history of the Philadelphia police department from its very inception, it is not surprising that the Proud Boys are seeking to ally themselves with the FOP.  This is the city where the notoriously racist Frank Rizzo once served as police commissioner.  Philadelphia is where police dropped a bomb on the MOVE family in 1985, causing a fire that destroyed 61 homes in a Black neighborhood and killed 11 people.

In June 2019 the Plain View Project released a report on racist and violent social media posts by thousands of police officers across the U.S., including over 300 in the Philadelphia police department. This led to a wave of protests, temporary suspensions of 114 officers, and the termination of 15 others, including 11 who resigned to avoid formal charges. In July 2020, nine of those who were fired or resigned sued the city for $18 million, claiming their First Amendment rights were violated.

While racist posts by police officers have resulted in disciplinary action and even termination, it is rare for police departments to have policies prohibiting officers from affiliating with white supremacist groups.  Yet, according to a recently released report from a former FBI special agent, “U.S. law enforcement officials have been tied to racist militant activities in more than a dozen states since 2000.” (theguardian.com, Aug. 27, 2020)

The Philadelphia police department is not unique.