What makes this Nov. 3 U.S. election unique is that it has become an arena for class struggle.

Voting is still dominated by big capital. No party with any chance of winning represents the real interests of laboring people, in the U.S. or worldwide. Both the Republican and Democratic parties serve a tiny elite of billionaires. They both use police inside the U.S. and the Pentagon abroad to maintain the dominance of that class. 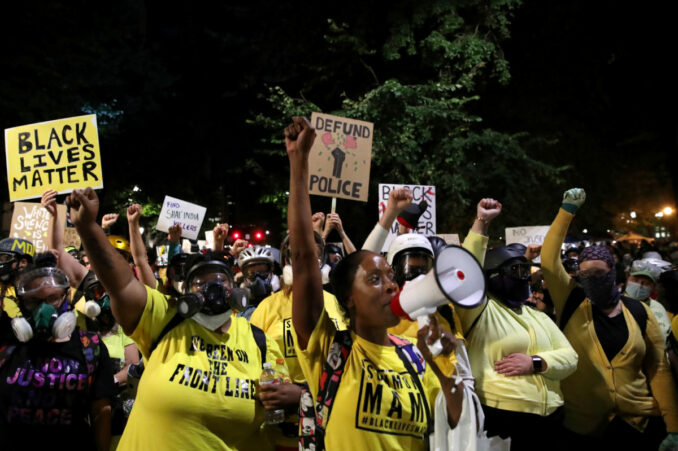 Nevertheless, what makes the outcome of the voting vital is that it measures the possibility of building working-class solidarity in the coming period.

Words are less important than deeds, but Trump has used a flood of racist words to mobilize the most backward and dangerous scum of U.S. society. His constant rants have filled a cesspool with racism, xenophobia, misogyny, bigotry directed at LGBTQ2S+ people, and insult and disdain for the tens of millions of people with disabilities and for the millions formerly or currently in prison.

A referendum on racism

This election embodies a referendum on racism. An overwhelming vote against Trump, an anti-racist vote, would at least create the possibility of building a unified working-class struggle, even if it can’t empty the cesspool of bigotry.

Such a struggle can fight for real gains for all workers within the United States and bring hope to the billions of people around the world who feel the imperialist heel on their necks.

To be clear, for Workers World, the working class includes all those who must work to survive: those in traditional jobs as well as gig jobs, unemployed, students hoping for future jobs, workers in the informal economy including sex workers, retired workers. They are of all colors and nationalities, born in the U.S., migrants − with or without papers − of all genders and gender identities, all sexualities, of all ages, with or without disabilities. This is our class.

Have no illusions. The Democratic candidate has openly demonstrated that he is a faithful servant to Wall Street and the banks, and that his party will carry out the strategic interests of U.S. imperialism on a world scale. Whether the Joe Biden/Kamala Harris team does this more efficiently and scientifically than the Donald Trump/Mike Pence team makes them no less a threat to the people of the world and the working class in the United States.

It is reasonable, however, that few would consider the two parties exactly equal in relation to their own survival. The Democratic Party has a multinational base. It also passed the Heroes Act in the House, which would keep 30-50 million people housed and fed. The Republicans refuse any help for the unemployed. The Republicans also threaten the right to legal abortion and same-sex marriage and would deny tens of millions of people health care.

Not to mention Trump’s calamitous handling of the COVID-19 crisis.

Tens of millions of people, out of fury, fear or both, will vote for Biden because they can’t stand Trump’s racist rants or because they need to survive. That is their right.

Defend the right to vote

And this right must be defended. Trump’s threat to prevent large sections of the population from voting − or from having their votes count – also makes this election unique. His threat exceeds the “usual” voter suppression of people once imprisoned and the historical voter suppression depriving African Americans and other people of color of their right to vote. It is a frontal attack on democratic rights.

With this attack, the Trump gang has turned the election into an arena of class struggle. Those who fight racism and all forms of discrimination must now assist in defense of the right to vote, even though the choice remains between two representatives of the capitalist ruling class.

The first line of defense would be to prevent the pro-Trump fascist gangs, including the police forces, from blocking people who want to vote. This voter suppression will be aimed mainly at Black, Latinx and other sectors of the population they believe will vote against Trump. The second line of defense is to assure the accurate count of the votes, half of which will arrive by mail or early voting. The third line is to stop a pro-Trump coup d’état.

That sectors of organized labor are discussing the possibility of a general strike to stop a Trump coup is an encouraging sign of incipient mass struggle. The multinational millions, led by African Americans, who took to the streets to fight police killings and first put Trump on the defensive, have also shouted “Shut it down!”

A mobilization joining these progressive forces in action can mark the birth of an instrument of united class struggle.

The polls − which of course give no guarantee − put the incumbent administration, itself riven with contradictions and infected with the coronavirus as well as with its own corruption and incompetence – behind in the total popular vote by even more than in 2016. That’s why Trump has threatened voter suppression to try to steal the election using the biased and undemocratic Electoral College.

Whatever the outcome, the election can only open the next phase of struggle. More important than the exact vote will be whatever working-class unity can be mobilized in the streets and the workplaces. This can start by defending the right to vote, and develop to confront capitalist domination of the economy and of all society. It will have to counter whichever capitalist party takes office.

Let the referendum against racism mark the beginning of a struggle for socialism, which is the only way to a future for the broad working class, in the U.S. and around the world.