Outrage over the police killing of Walter Wallace, Jr., a Black husband, father, son, and twin, erupted throughout his West Philadelphia neighborhood on Oct. 26, as news of the incident spread.  Wallace was shot multiple times by police on his block in front of his mother and neighbors who frantically urged police not to shoot. 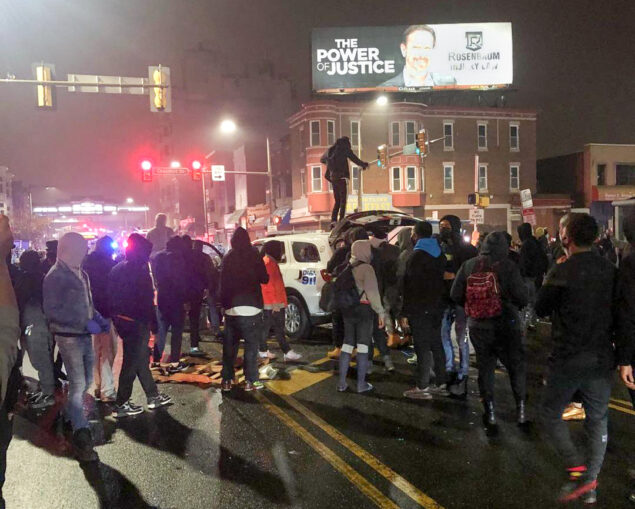 Protesters clash with police following murder of Walter Wallace on Oct. 26 in Philadelphia.

Workers World spoke with MOVE leader Pam Africa, a neighbor of the Wallace family, who gave an account of what neighbors witnessed: “Police were out earlier in the afternoon when his mother reported a domestic incident.  They were at the house but left.  Then police returned a few hours later.  They knew he had mental health issues.  Why didn’t they send counselors?”

Wallace’s father, Walter Wallace, Sr. told reporters that “his son struggled with mental health issues and was on medication. Why did they have to gun him down?”

Other witnesses stated that Wallace was on the porch with his mother when police returned the second time.  As he stepped off the porch police immediately drew their guns.  His mother ran after him, trying to shield him, telling police he was her son.  As soon as Wallace entered the street, and was still at least ten feet away, police fired over 13 bullets.  It is not clear how many hit Wallace, who was dead upon arrival at a nearby hospital. There are conflicting reports on whether Wallace had a knife.

As news of the murder spread, demonstrators gathered at Malcolm X Park in West Philadelphia, and marched to the nearby 18th Police District. The crowd eventually grew to several hundred who confronted the police well into the early hours of the morning.  One police car was overturned and burned.  One officer was struck by a pickup truck, and several others were reportedly struck by bricks and other projectiles.

Over 90 arrests were made, with some protesters taken to the 1st Police District several miles away in South Philadelphia.  Videos from the conflict show residents throughout the predominantly Black neighborhood along 52nd Street repeatedly questioning police over their excessive use of force.

Community meetings and more protests are being organized. More information can be found at #WalterWallace.