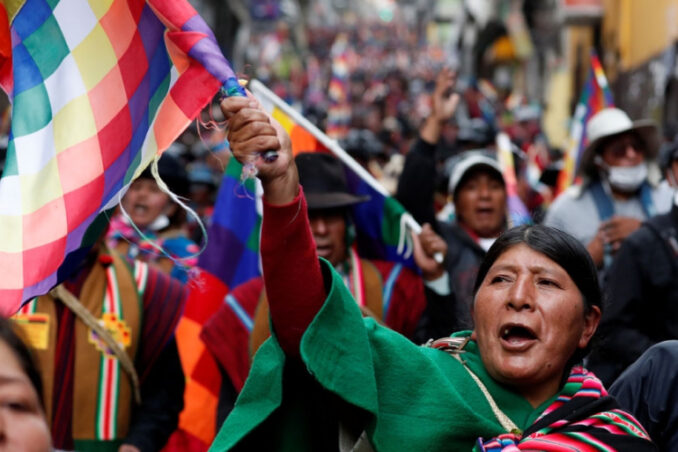 Workers World received this article from its author, written Oct. 21 by a Venezuelan political analyst and essayist. Translation by John Catalinotto.

During the final months of last year, I wrote two articles in successive months under the titles “Latin America is on fire” and “Some reflections on recent events in the region,” in which I observed that the winds of change were beginning to blow. In this regard, several readers wrote to me with opinions ranging from “thank you for conveying optimism” to “is it possible to be optimistic?”

One of my articles concluded by saying that the mass participation that progressive governments had generated in the region in the first 15 years of this century would facilitate the emergence of a “new leadership that will carry the struggle to higher levels until we achieve independence and definitive freedom.”

Today, a year later and taking into account the events of the last few days on this continent, I can confirm that this view was correct, and not just because I’m an optimistic individual. It’s also by observing real events under the magnifying glass of dialectical analysis, studying new events that negate the earlier events. These new events produce quantitative changes that transform the quality of the struggle.

The central event during a victorious weekend that influenced this transformation was the elections in Bolivia. This showed that the peoples of Latin America are beginning to make it clear that an awakening was taking place, following the neoliberal night that was reinstalled in the region starting in 2015. As we said some time ago, this time the people of the continent would not have to wait 25 years, as they did from the overthrow of President Allende in 1973 to the victory of Comandante Chávez in 1998.

It wasn’t Latin America that surrendered, but only its elites, who have collapsed without thought to the United States, a country where popular and social organizations and its intellectuals themselves are beginning to wonder if they are indeed living in a democracy. The spirit of struggle south of the Rio Bravo did not cease, it only paused for a moment and can now wake up, study the new conditions that the conservative and fascist right wing in the region has imposed on politics. From this it can understand that — as it has always been — organization, education and mobilization are the needed and adequate instruments to break the neofascist block that can no longer stay in power in a representative democracy.

Last weekend began with the massive celebration of the Peronist loyalty day in  Argentina on Oct. 17. The limitations imposed by the pandemic did not prevent that wide range of citizens who gather under the ideas of General Perón from giving a forceful show of support to the government. Despite its flip-flopping on some issues, this new government is making an effort to restore the country after the four-year disaster caused by the neoliberal right-wing [Macri regime] that governed between 2015 and 2019.

It is impossible to understand Argentina without taking Peronism into account. There are neoliberal and right-wing currents within Peronism that differ little from Macri’s government, and that are not the least bit reluctant to lick the boots of the empire. Still I am left with the words of Emilio Pérsico, secretary general of the Evita Movement, who said on Oct. 17 that “Peronism is revolutionary, because it gave power to those who had no power and incorporated the workers into politics,” assuring everyone that “it is still in force among the workers and the humble of the country.”

Oct. 18 was a day of celebration and victory for the Latin American region. In Chile a massive demonstration commemorated the first anniversary of the beginning of the struggle for the recovery of dignity and homeland. Hundreds of thousands of people mobilized to express their opposition to the extreme structure of neoliberalism in a country that was considered the model to follow because it was administered by “socialists” and “democratic Christians” who gave continuity to Pinochet’s legacy, all under the watchful eye of the armed forces and security forces, also modeled by the dictator.

The imperishable fighting spirit of the Chilean people is present today when, gathering the best traditions of their history, the young generations raise their own flags at the same time that from new perspectives they produce a leadership and an organization — still fragile — but which has managed to force the system to organize a tricky plebiscite. Despite its trickiness, this plebiscite is a new arena of combat that can lead to greater and more decisive struggles. As pointed out in the demonstrations. “Chile is no longer the same.” [The plebiscite, held a week later on Oct. 25, showed that 78% of the voters wanted to replace the Pinochet constitution.]

That same Oct. 18 in Colombia, the Minga formed by thousands of Indigenous people and peasants entered Bogotá, where they were warmly received by the citizens of the capital. [Minga is a Quechua word meaning “collective work.”]  Throughout their journey from the south of the country, they were acclaimed in fields and cities by women and men who identified with the decision of the marchers, who asked to speak to the president, simply to ask him to stop killing them.

Alvaro Uribe’s opinion regarding this form of struggle is shown in a tweet from April 6, 2019, when he said, “It is preferable to close that highway for two years, to instead improve and take care of the detour, than to sign agreements with the minga that is backed by terrorism.” When in a country, fighting for the right to life is considered by the elites an act of terror, we are facing a situation that the Colombian writer Santiago Gamboa calls “a celebration of democratic hate.”

Nevertheless, the protest movement against Iván Duque, who governs on behalf of Uribe, has led to the Oct. 21 national strike, called by the committee in which community, student, union, women’s, transportation and business organizations, among others, are participating. The strike aims at “defending life and democracy, protesting against violence and demanding the negotiation of the national emergency plan.”

Also last Sunday, Oct. 18, the magistrates of Ecuador’s Contentious Electoral Tribunal (TCE) dismissed the appeal filed against Andrés Arauz and Carlos Rabascall, candidates for the Presidency and Vice Presidency of the Republic, respectively, by the Union for Hope (UNES) movement for the general elections of February 2021. This ruling, which cannot be appealed, allows the participation of both candidates in next year’s elections, overcoming a new antidemocratic maneuver attempted by Lenin Moreno’s government in alliance with the traditional right wing of the country.

In a statement, the UNES movement explained that once the decision is carried out, an action that is planned for today, Oct. 21, the National Electoral Council “must authorize this pair of candidates representing the Citizen’s Revolution.” They can now enter with force in the electoral race. [See article on Ecuador, this issue of Workers World.] 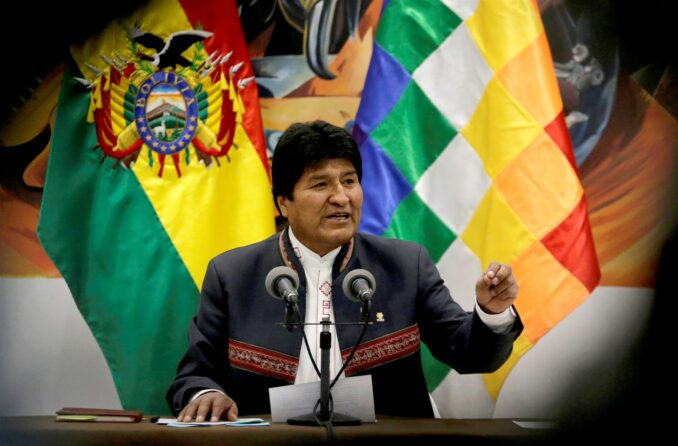 Finally, the historic day of October 18 would close in the early hours of Monday morning with the confirmation of the overwhelming electoral victory of the Movement toward Socialism-Political Instrument for the Sovereignty of the Peoples (MAS-IPSP) of Bolivia. The MAS-IPSP not only won the presidency of the country, but also achieved the absolute majority that will give it control of both houses of the Plurinational Legislative Assembly.

More than just an election, this meant the defeat of the coup d’état carried out last year by the fascist right, with the support of the U.S. government and the OAS. In this context, the victory of the MAS represents the failure of U.S. policy. The U.S. showed it felt this as a blow if we consider that the recognition of the new elected authorities was made by Secretary of State Mike Pompeo, today, Wednesday, three days after the event, while last year, an overjoyed Donald Trump himself personally and immediately congratulated the self-proclaimed de facto president [Jeanine Áñez], who was imposed in that position after the coup d’état.

Not everything would end there, on Monday, Oct. 19, a national strike  in Costa Rica successfully protested the government’s neoliberal policies. The call exposed the need to combat the policies, bills and measures of a neoliberal nature promoted by the government of the Citizen Action Party. Likewise, it denounced that “the deputies and business sectors intend to make work more precarious and act against social justice, eliminating labor and union rights, and negatively affecting social security at the times when we most need to strengthen it.”

Olman Chinchilla, president of the Central of the Costa Rican Workers’ Movement (CMTC), the organization that called for the strike, stated that “. . . we are doing it for Costa Rica, for our country, in defense of our strategic institutions, for labor rights, and to demonstrate that we want absolutely nothing to do with the International Monetary Fund.”

[Nineteenth century South American independence leader Simón] Bolívar pointed out that “The homeland is America.” Sometimes the daily nature of our problems and the particularity of our conflicts do not allow us to see that Latin Americans and Caribbeans form part of a whole that struggles and dreams of a better world, each one in their country, in their conditions and their context.

We must keep in mind that as Bolívar taught us in his “Letter from Jamaica”: “Just because our successes have been partial and intermittent is no reason to doubt our fortune. In some places the independents win victories, while in others the tyrants seem to be gaining ground. But what is the final outcome? Is not the entire New World stirred to action and armed for defense? If we look around, we observe a simultaneous struggle throughout this hemisphere.”