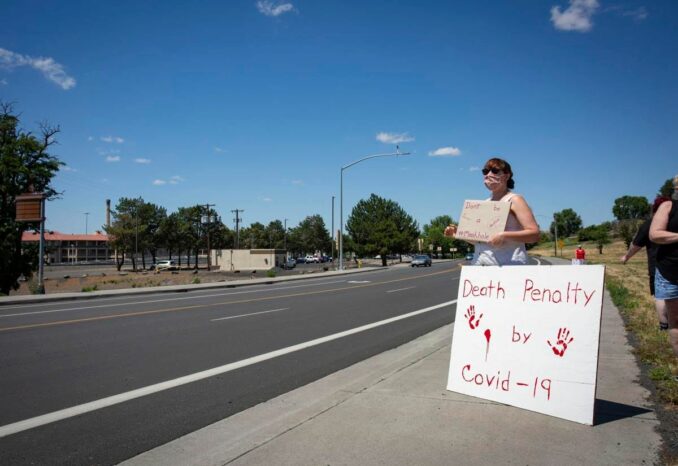 In mid-September more than 3,000 prisoners, including over 1,000 women, were evacuated under the most horrific conditions from several Oregon prisons due to historic forest fires and smoke. These evacuations — so-called “super-spreader events” — are a probable cause for the current spike in Covid-19 deaths.

Evacuated prisoners were handcuffed in pairs and packed in buses with little or no personal protective equipment — in flagrant disregard of public health protocols.

Women prisoners evacuated to Deer Ridge, a men’s prison, were kept on buses for more than seven hours straight with no toilet facilities. They were callously told by guards to “go in your pants.” There was no food and little or no water.

The women protested vehemently against the unacceptable conditions, and demonstrated loudly and defiantly on each bus. When they arrived at Deer Ridge, all prisoners, men and women, were forced to sleep only six inches apart in cells, hallways, a recreation center, and other spaces.

Over 200 male prisoners rioted, sitting down in the yard, after being told they would be housed in a building that had been closed for four years. Upon entering, they found the space overrun with mice, littered with mice feces and smelling of urine – which is not only grossly unpleasant but can carry the potentially lethal hantavirus, especially in dry climates like eastern Oregon.

In addition, the space reeked of mildew and the walls were covered with green and black mold. On top of this, the prisoners were not provided with sleeping gear and were expected to sleep in the trash and filth.

Of approximately 15,000 people incarcerated in Oregon’s state prisons, 1,403 have contracted the novel coronavirus. Of 72 “workplaces” in the state known to have high concentrations of Covid-19, three of the top four are state prisons. Oregon calls prisons “workplaces” because guards and staff work in them. While no staff members employed in any prison have died of the virus, 17 prisoners have.

But Oregon prisons, like all U.S. prisons, are workplaces. In 2019, prisoners in the state produced $29 million in value. Nevertheless, they were paid only a maximum hourly wage of 5 cents to 47 cents. Additionally, 345 Oregon prisoners are firefighters who risk their lives for a maximum pay of $9.80 per day.

Of the 1,403 virus cases among prisoners, 498 are in Snake River prison. There, guards and staff notoriously and flagrantly refuse to use PPE or adhere to public health protocols for either themselves or for prisoners. Snake River has the highest death count among prisoners; seven have died there.