The incredible depth and breadth of capital punishment was brought out very clearly on Oct. 10, as the 21st Annual March to Abolish the Death Penalty was held. Even though it was a virtual event this year, the passions, emotions, dedication and love shared by all participants were empowering tributes to the determination of Texas families and activists to stop legal lynchings.

Sandra Reed spoke, as her three-year-old grandson, R.J., peered into the camera from behind her. She raised goosebumps on participants, as she described all the “illegalities, lies, deceits and conspiracies” that sent her innocent son, Rodney Reed, to death row in 1998. She declared: “The death penalty is heartless. It is racist. It is wrong. We will continue to fight for what is right — and that is to end this death penalty now!” 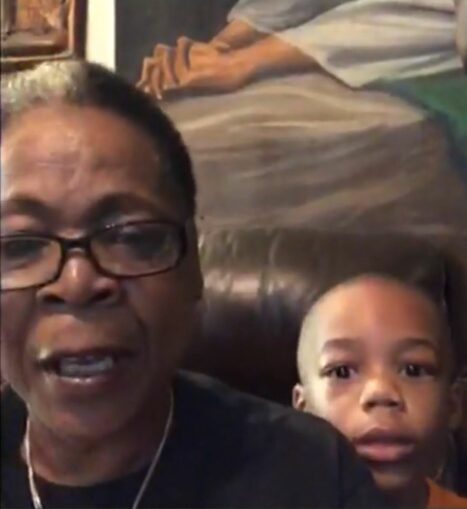 From Sandrine Ageorges-Skinner, an activist in Paris, an organizer for the World Coalition to Abolish the Death Penalty, and the spouse of Hank Skinner — who is on death row in Texas — to Bill Pelke, based in Alaska, founder of the Journey of Hope, the speakers captivated attendees.

Dee Colonize, a poet and recognized spoken word artist, shared her own moving work, “Cruel and Unusual,” and then she read a poem entitled “Miracles” by political prisoner Mumia Abu-Jamal.

Walter Long spoke. He is the attorney who founded the Texas After Violence Project and a new program at St. Edward’s University in Austin which provides therapeutic counseling for death row families dealing with complex grief and unique trauma.

It was the words spoken by those with family members on death row who revealed how deep the angst, trauma and fear runs. Yancy Balderas, spouse of Juan Balderas on the row, spoke through tears: “The death penalty affects me every day. The process of justice is not right. How did the nephew of the prosecutor get to sit on Juan’s jury? Why wouldn’t the judge accept the hung jury in Juan’s case?”

Balderas stressed: “If this had been a cop case, the judge would have accepted a hung jury and ended it. Juan’s appointed attorney was Jerome Godinich who was chastised by the 5th Circuit Court of Appeals for repeatedly failing to meet federal death penalty deadlines, and who never did an investigation. We never even met him for four years.”

And Balderas asks further leading questions: “Why did we wait over eight years for a trial? Juan has been on death row for six years, and we just got evidence turned over in 2018 that should have been given to us at trial. This system is broken in Texas. It can’t be fixed. It’s got to be abolished,”

Maria Victoria Reyes, the mother of Juan Balderas, cried as she told us, “Every single day I suffer, every single day because I cannot even touch my son. There’s no justice for poor people, people like us. We feel this every day.” 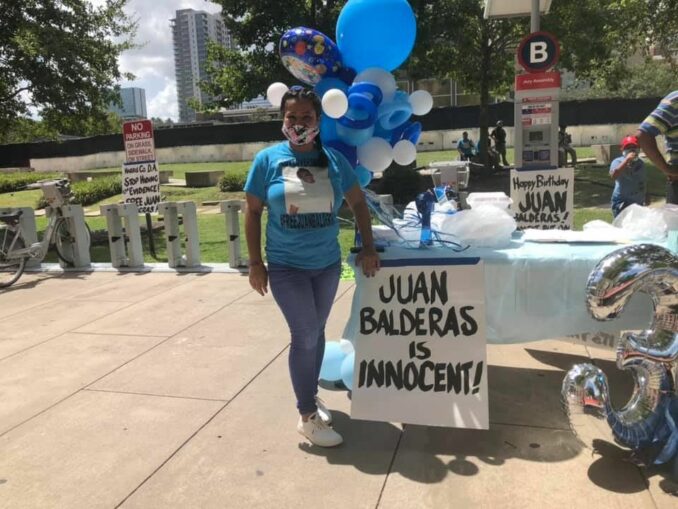 ‘This is not justice. It is ‘revenge, pure and simple’

Elsa Alcala, a former judge who served six years on Texas’ highest court, was a special guest: “As a young prosecutor, I was told that the death penalty was reserved for the worst of the worst. I bought into that. But after serving on the Court of Criminal Appeals, I learned that this just is not true. . . . Taking a live human being and causing their death is called homicide. That’s what it is,” she explained. “It’s revenge, pure and simple. That is not justice.”

Texas State Rep. Harold Dutton, an ally of abolitionists since first elected to the House in 1984, has introduced a bill in every session to abolish the death penalty. He has held a Day of the Innocent at the Legislature and recognized death row exonerees on the floor of the House.

Rep. Dutton says: “The death penalty is only applied to poor people, Black and Brown people! In Texas. you can get the death penalty and not have killed anybody. This is called the ‘Law of Parties’ — and it is absurd. Since the death penalty doesn’t apply to the rich, we must just eliminate it. Let’s keep the movement up, and keep this fire burning brighter. We need to just abolish the death penalty.”

Terri Been, Jeff Wood’s sister, attended. Wood is a death row prisoner even though he wasn’t in the building where a murder took place. He is one of many — Randy Halprin, Rudy Medrano, Juan Ramirez, Humberto Garza and others — who are on death row under the Law of Parties.

Been explains: “I consider myself to be a victim of this crime. So is his daughter, his grandkids, our parents. There are not words to describe what our family goes through. Emotionally, I am in that cell with my brother every single second of every single day. Every day I am awaiting death.

“My name is Sabrina Butler Smith, and I was charged with murdering my baby son and sentenced to death by an all-white jury in Mississippi,” the first exonerated woman explained. “One of my attorneys was a divorce attorney, who was drunk every day of my trial. I was poor, young, Black and undereducated. My execution date was July 2, but no one even told me that I had appeals. I was waiting all day to die. Since I have been freed, I have learned that together we can accomplish a lot. I am the first woman exonerated from death row, and I will continue to fight as a member of Witness To Innocence and with all of you.”

Another exoneree, Ron Keine, a board member of Witness To Innocence, is on a committee called Justice After Exoneration. He said: “We’re 172 people who were exonerated from death row. But not every state provides compensation. So I’m working in New Mexico and other states to get compensation for exonerees. My case is like Rodney Reed’s, because the real killer in our cases was a cop. I got off because the cop who committed the murder that I was charged with found Jesus, and he confessed.”

Viewers were treated to a photo display of actions by the Kids Against the Death Penalty. Since their founding in 2008, the KADP have demonstrated at each annual event and at the governor’s mansion and the Texas Capitol, and they have lobbied the legislature. Speaking for them were Gavin Been and Brittany Burts who set up the online event which can be found on their FaceBook page.

Humberto Garza is on death row because of the Law of Parties. His mother, Lydia Garza, spoke from the Rio Grande Valley, saying, “I am not an eloquent speaker, but I just want to thank everybody who has joined this effort, especially the KADP who were so young and small when we first met them. Not having visits all these months has been quite depressing for families. My son is my only son, and he was sentenced under the Law of Parties. He was not the shooter. He wasn’t at the place where this happened. This is so unjust. I thank you all from the bottom of my heart, and my son does too.”

Delia Perez Meyers spoke on behalf of her brother Luis Perez, whose innocence she has been fighting to prove since he was arrested in 1998. “We are still getting boxes of evidence that were never turned over to Perez’s attorney. Several innocence projects are now working on my brother’s case. My brother sends his love, even though he is still terribly ill from suffering a few heart attacks.

Liliana Segura writes for the Intercept, which published her excellent article on the recent federal execution of 19-year-old Christopher Vialva. She told us, “When the federal government is carrying out executions during this pandemic, this really exposes the lies that this is about public safety. It is revenge.”

After a talk by Lillian Mauldin, of Amnesty International at the University of Texas, the last speaker was a representative of Texas Death Penalty Abolition Movement and Workers World Party. She spoke of the six women on Texas death row and gave the good news about Melissa Lucio, whose case was thrown out by the 5th U.S. Circuit Court of Appeals, and is awaiting either a new trial or release.

Many statistics were given showing that the death penalty is dying. Fewer people are being executed. Fewer death sentences are being given out. Fewer people support executing people.

The pandemic may have prevented an in-person march and rally, but this virtual event proved to be just as emotionally taxing, but also as exciting, informational and motivational as the previous 20 in-person events.