Some 60 people responded to a call by members of the Coast Miwok of Marin for a Red Paint Rally on Indigenous Peoples Day at the Mission San Rafael. The crowd gathered Oct. 12 at the statue of Junipero Serra outside the mission, which is one of the California missions established by Spain in the 1700s. 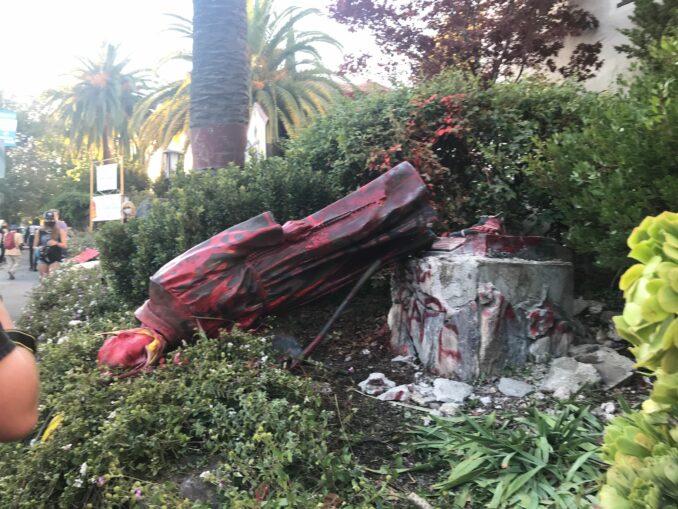 Protesters covered the Serra statue with red paint. Then they toppled the statue of Spanish priest and missionary Junipero Serra. (tinyurl.com/yxku9535)

Organizers said Indigenous Peoples Day is a day to honor Indigenous people and their ancestors. “To tell our true history and who we are,” said Dean Hoaglin with Coast Miwok of Marin. “Our people were forcibly put here. They did not ask to come here to this mission. They were enslaved here.” (tinyurl.com/yxlzk2zp)

Miwok speakers pointed out that Native peoples had been subjected to floggings and slavery inside the California missions, as part of the Spanish conquest. Serra was the father of the notorious California Mission system, during which Spanish soldiers kidnapped Native people, forced them to build the missions and worked them to death at early ages.

Five young women alleged to have participated were issued citations and released by San Rafael police.

Serra was canonized as a saint in 2015 by Pope Francis during a visit to the United States. However, Serra has become a symbol of the land theft and genocidal abuses against the First Peoples by Spanish and United States colonializers down through the years.