Not only does Trump continue to carry out a vile anti-immigrant diatribe almost daily, agents from Immigration and Custom Enforcement carried out an ominous SWAT attack in Arizona recently. And in New York City, ICE agents are arresting immigrants by pretending to be NYC police. 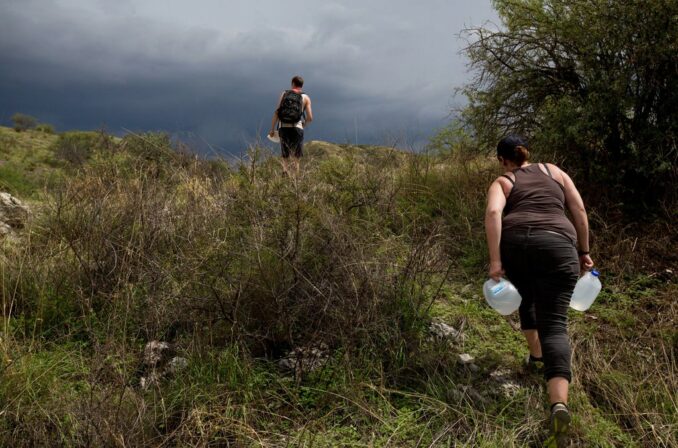 No More Deaths volunteers have distributed water along desert migrant paths since 2013.

Dying of thirst acceptable in the US

On Oct. 5, the U.S. Border Patrol raided the No More Deaths camp in Arizona near the U.S./Mexico border. This humanitarian organization, a vital lifesaving group of heroic individuals, reported from the camp that ICE agents captured 12 immigrants and detained seven volunteers. No More Deaths characterized the arrests and detentions as “a pattern of criminalization.”

This was the second raid at the group’s camp since this summer. According to the Washington Post, No More Deaths “is a faith-based group formed in 2004 in response to a large number of migrants who were dying while attempting to cross the brutal Sonoran Desert.” (Oct. 6)

A No More Deaths press release stated: “After sunset on Oct. 5, U.S. Border Patrol entered . . . Byrd Camp with a federal warrant. Volunteers were held for 3 hours while people receiving medical care, food, water and shelter from the 100+ degree heat were detained.”

According to the organization, the state invasion was “a massive show of armed force” as BORTAC (Border Patrol Tactical Unit) “descended on the camp with an armored tank, ATVs, a helicopter and many marked and unmarked vehicles. Agents armed with assault rifles chased and terrorized those [who] were receiving care.” In addition, they broke windows and doors and destroyed essential infrastructure and supplies.

The press release continued: “This criminalization of the humanitarian aid and medical care we provide is only a furtherance of the agency’s deadly policies. Border Patrol detains people in unsafe and deadly facilities where medical neglect is rampant and human rights abuses are well documented.”

To send messages of solidarity or a much-needed monetary donation, please visit: nomoredeaths.org

ICE and police, one and the same

New Yorkers have every reason to be intimidated and leery of the New York police, after the infamous “stop and frisk” debacle that targeted Black and Brown communities and the tragic murder in 2014 of Eric Garner, whose cry “I can’t breathe” generated mass protest.

So when police come to the door searching for someone, and the cops turn out to be ICE agents, you can rest assured the community will resist.

That is why advocates and city officials gathered with immigrant families on Oct. 10 to denounce reports of “deceptive practices by ICE officers to detain and deport people.”

According to City Council member Ydanis Rodriguez, one of the rally’s organizers, the community was calling for the release of Fernando Santos-Martinez, seized by ICE officers claiming to be NYPD officers from the 34th Precinct.

According to Rodriguez, ICE showed up in plain clothes at the family’s apartment and repeatedly tried to get inside while identifying themselves as police. Not letting the family’s resistance stop them, ICE agents then tried to intimidate the building superintendent into getting Santos-Martinez’s spouse, Maria, to open the door,

The ICE agents said they needed to speak with Santos-Martinez “about a prior incident,” so the spouse “unknowingly gave them his phone number,” Rodriguez said.

NYC Mayor Bill de Blasio reportedly said on Friday that he had “asked ICE to order its agents to not state or imply they represent the NYPD.”

But both the NYPD and ICE cops are rogue agents protecting a capitalist state. And they will do what they want to do to and put in action their white supremacist beliefs, not do what de Blasio orders. The police and ICE have shown over and over they are politically aligned with the Trump administration’s vile racist policies. In fact, the NYPD, through its “Police Benevolent Association” propaganda unit, came out in August in a historic first to endorse Trump for another term as president.

As ICE prevents migrants from obtaining water in the desert with armored tanks — and as police and ICE join forces more and more — it is past time for the movement to abolish the police and ICE once and for all.