The colonizers’ “Columbus Day” is still scheduled by Boston and the state of Massachusetts for Oct. 12, although activists in the state have gotten the day dropped by multiple municipalities and campuses. Indigenous Peoples’ Day is instead now celebrated on the second Monday in October in 12 states and Washington, D.C., plus hundreds of cities, towns and school communities across the U.S. 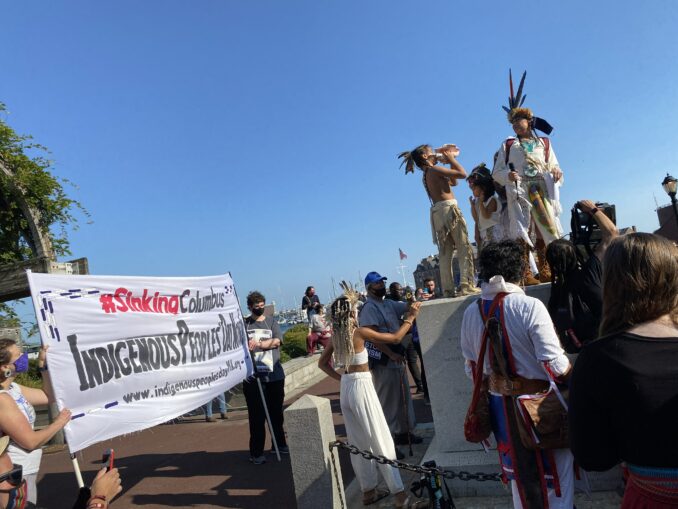 On Oct. 10, hundreds marched in Boston for Indigenous Peoples’ Day.

The time and space claimed by the #SinkingColumbus action was a force of decolonization and cultural resistance, centering Indigenous people and Black and Brown allies. NAICOB leader Jean-Luc Pierite welcomed Palestinian activists to share the platform. A representative from Italian Americans for Indigenous Peoples’ Day spoke to combat the false narrative that removing Columbus is anti-Italian.

All speakers acknowledged a new holiday is just the beginning. As NAICOB leader Mea Johnson put it in a press statement, “The bare minimum action required is to change Columbus Day to Indigenous Peoples’ Day and remove all symbols of white supremacy from our neighborhoods, streets and parks.”

A solemn and joyful gathering

The gathering began solemnly at the Massachusetts State House on Boston Common and ended joyfully with dance by BOMBAntillana and other artists at Taíno Waterfront Park, the new name given by activists reclaiming another tribute formerly lavished on the genocidal Columbus.

UAINE leader Moonanum James welcomed the crowd with an acknowledgement of the stolen unceded territory that the settler “state” is built on: “Your presence liberates [this land] from those who make monuments to butchers and rapists.”

David Detmold reminded onlookers that the motto emblazoned on the Massachusetts state seal and flag — an inaccurate rendering of a Native person under a sword-wielding arm — means “by the sword we seek peace,” an explicit threat that continues to cause harm.

The Massachusetts Indigenous Legislative Agenda includes five currently pending bills, including an IPD initiative and proposal to change the state seal and flag. As Detmold explained, with the recent removal of Confederate imagery from the Mississippi flag by its legislature, Massachusetts is now the last state to retain its racist flag.

There is also a bill to protect Native artifacts, as well as one to remove racist mascots from school sports teams. Finally, H.444, Improving Indigenous Educational Outcomes, would establish a commission to ensure that data accurately reflects the presence of Indigenous children in schools and to oversee action to serve the community. Supporters were urged to contact legislators, write letters and attend hearings.

“We’re here; we’re not going anywhere, and [Boston Mayor Marty Walsh] needs to listen to us,” Mahtowin Munro, leader of IndigenousPeoplesDay MA and UAINE, asserted in front of so-called Faneuil Hall — named for an  enslaver. Kevin Peterson from the New Democracy Coalition — a group leading a boycott of the racist site — also spoke. Both criticized Walsh for his attitude toward communities of color. As Munro said, “He’s like, ‘I agree with your point here, and I don’t agree with your point there’ . . . [but] it is not up to these white people to decide what is offensive to us and what is important to us!”

Munro denounced official statistics, akin to history book distortions and Hollywood stereotypes, which leave out Indigenous people and miss the fact they face disproportionate impacts of illness, violence and poverty. COVID-19 is an example: Last spring the Navajo Nation had one of the highest coronavirus infection rates in the U.S. (tinyurl.com/ybqxeu87)

“Columbus is not a day, but a symbol of genocide, gender violence, colonization, slavery and white supremacy,” Chali’Naru Dones, representing the United Confederation of Taíno Peoples, told the crowd. The Taíno are the people of Borinquen, now known by the Spanish colonizers’ name of Puerto Rico, where Columbus landed in 1493. Dones’ children joined her in mounting the empty pedestal, which had been used to support a statue of Columbus, which was finally removed after its second beheading in June.

One of the children sounded a conch shell horn to thunderous applause. The child who towered from the pedestal and summoned the crowd’s attention was an especially pointed upending of the colonialist narrative.

This powerful image of resistance affirmed that living Indigenous people are reclaiming space from dead white oppressors — amid increased mass awareness about the toxic founding myths of the U.S. and increasing Black Lives Matter-inspired direct action against ongoing racist injustice.