It appears likely that the Trump wing of the ruling class will ram through the Supreme Court nomination of Judge Amy Coney Barrett, who is racist, pro-patriarchy, anti-woman, anti-LGBTQ2S+ and anti-worker. The Senate Judiciary Committee votes on the nomination Oct. 22, and the full Senate vote is expected before the Nov. 3 election. The judge’s right-wing billionaire backers include the Koch brothers, the DeVos family, the Mercers and the Bradley Foundation. 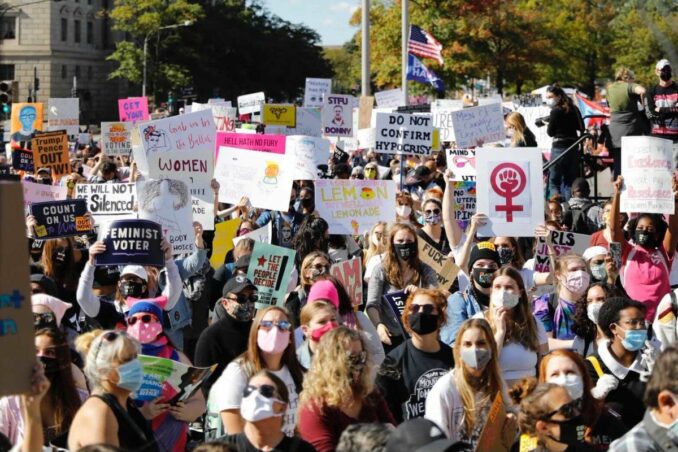 Many are worried that with a clear 6-3 SCOTUS majority, the right wing will have an unimpeded path to accomplishing goals that include overturning Roe v. Wade, Obergefell v. Hodges (the decision legalizing same–sex marriage) and ending the Affordable Care Act, known informally as Obamacare. The latter would deprive millions of health insurance. Barrett evaded questions on these issues during the confirmation hearings.

This rushed appointment is not, however, going unchallenged. Women’s Marches, held in 438 cities across the country Oct. 17, expressed mass opposition to Barrett and Trump. In Washington, D.C., thousands marching in the streets vastly outnumbered those in a small, pro-Trump and pro-Barrett “I’m With Her” rally.

“We’re holding socially distant actions across the country to send an unmistakable message about the fierce opposition to Trump and his agenda, including his attempt to fill Ruth Bader Ginsburg’s seat,” the Women’s March organization stated in its appeal. The organization promotes progressive initiatives such as “Defund the Police” and “Mask up.” Marchers’ signs raised a range of slogans, from “Justice for Breonna Taylor” to “End the Subminimum wage for tipped workers” to “Keep your tiny hands off my rights.” (womensmarch.com)

Can the patriarchy be voted out?

Women, nonbinary and gender-nonconforming people, and allies turned out in militant defiance of the sexist, fascist-oriented Trump cabal. However, the primary focus was not building a mass movement in the streets to push back fascism — which could have been given a real boost Oct. 17.

Instead the overarching theme was “Get Out the Vote!” and “Vote Trump out!” i.e., “Vote for Biden,” etc.

Understandably, people feel an urgency to prevent another four years of Trump. But Biden himself has a history of misogynistic behavior, from engaging in unwanted touching to his poor treatment of Professor Anita Hill during the confirmation hearings for SCOTUS Justice Clarence Thomas.

One should question whether the former vice president’s recent apologies for past behavior are sincere. But regardless, it is illusory to think the electoral process alone can secure women’s rights. Mass protests are what won the right to obtain a legal abortion from a conservative SCOTUS in 1973.

Since the landmark ruling, there have been multiple battles against right-wing attempts to roll back the Roe v. Wade decision. It’s worthwhile to recall the 1992 “Battle of Buffalo” movement, which pushed back the reactionary, anti-abortion, misogynist “Operation Rescue” and blocked the group’s stated goal of shutting down Buffalo’s reproductive health clinics.

1992: Buffalo United for Choice ‘booted ‘em out of Buffalo’

Operation Rescue’s targeting of Buffalo followed its 1991 siege of clinics in Wichita, Kan. In response, Buffalo United for Choice was formed, with the participation of Workers World Party, around the slogan “Boot ‘em out of Buffalo!”

The Buffalo coalition laid the groundwork for a people’s defense of women’s clinics. “The technique of several rows of defenders, arms and legs linked in formation around clinic doors, was practiced for weeks by hundreds of people. It could easily be likened to a people’s militia,” the pamphlet explains.

Despite a court injunction to keep the clinics open, it was clear the police were aiding Operation Rescue. But from the day when this right-wing organization threatened to begin its clinic blockade, the hundreds of defenders arriving in the wee hours of the morning made it clear that the right-wingers were out-organized — by the people, not the state!

This is the kind of movement that will defend and expand reproductive justice for all, regardless of the makeup of the Supreme Court.