National elections are scheduled to take place in Bolivia on Oct. 18. They are the first to be held since November 2019, when a Washington-backed coup overthrew the legal government of President Evo Morales. The coup regime, guilty of repression, massive corruption and a mangled response to COVID-19, is facing electoral defeat.

The danger facing Bolivia’s workers and Indigenous peoples is that this regime will attempt electoral fraud or another coup to stay in power.

On Oct. 20, 2019, Morales, Bolivia’s first elected president from its large Indigenous communities, won in the first round, but with less than 50% of the vote. His other three election victories, starting in 2006, had been by clear majorities. However, Bolivian election law gives the presidency to the leading candidate, as long as they receive more than 40% of the vote and lead the runner-up by more than 10 percentage points. 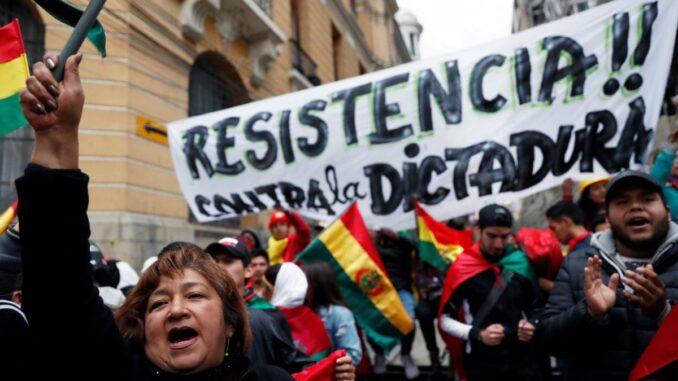 During last year’s election, Morales’ right-wing opposition organized fascist-like mobs that assaulted offices of his Movement Toward Socialism (MAS) party, government offices, and the homes of MAS leaders. Police units supported the extralegal gangs, who wielded clubs and caused havoc in pro-MAS areas of the country. The coup makers mobilized their gangs based on anti-Indigenous racism.

From abroad, the pro-U.S. Organization of American States and U.S. imperialism conspired with the coup makers and the anti-Morales oligarchy inside Bolivia. Finally, on Nov. 10, 2019, the Bolivian national military pressured Morales to resign, which he did. Police and military repressed mass protests of the coup with lethal force. (workers.org/2019/11/44357/)

The coup regime, led by interim President Jeanine Áñez, kept postponing these presidential elections – starting this May and then twice over the summer – because the coup makers expected MAS candidates to win the elections. Mass protests kept demanding the elections be held.

It appears the elections will take place on Oct. 18. Áñez herself ran so poorly in the polls that she withdrew in September. Polls in mid-September predicted a possible MAS victory in the first round, led by its presidential candidate this time, Lucho Arce. (workers.org/2020/09/51521/)

Not only has Áñez pulled out of the race, but three of her economic ministers resigned on Sept. 28, revealing some of the many differences dividing the pro-coup forces.

One of the MAS leaders, Franklin Flores, has said, “Unfortunately, Bolivia has two pandemics: against life and against our economy. The first one, the coronavirus, is killing us. And in the other, it kills us with hunger. There is a lack of government social assistance. With the quarantine the productive apparatus is paralyzed, therefore, the economic situation is bad.”

Morales, speaking from his exile in Argentina in July, detailed how the coup regime had wrecked the lives of many Bolivians: “In seven months they have destroyed the economy. It pains me a lot. With much effort and commitment we had built and we had left a dignified, sovereign, productive Bolivia. A Bolivia with much independence, with dignity, with freedom, but also with a lot of diversity. Diversity is the richness of our identity and it is our dignity.

“It is going to be difficult to rebuild, but with Lucho Arce we started together in 2006 and at that time they also left us a beggar state. Now, with so much corruption and nepotism they paralyzed the entire productive apparatus.

“There is no investment from the State, zero investment for public companies, let alone for new productive enterprises. Because what we did was nationalize Entel [the telephone company], nationalize basic services, hydrocarbons, minerals. Nationalize and expand the productive apparatus in the hands of the state.” (El Salto, July 6)

In a more recent interview, Morales said that the current government under the administration of Jeanine Áñez is not a transitional government, but “it is a de facto government, it is a coup d’état and therefore a dictatorship.” (Hispan TV, Oct. 4)

The MAS leader said there will be surprises in the elections on Oct. 18 because even the people who voted against him last year, and who participated in the coup d’état, are now indignant, disappointed, regretting that the current administration, in 10 months, has destroyed the economy.

Evo Morales once again denounced the U.S. role of intervening in past elections. He says the U.S. goal is to prevent him from returning to Bolivia and keep the MAS from running the government.