Thousands of workers and students marched and rallied in Indonesia on Oct. 7 to protest a new antilabor law.

“Labor rights activists, workers and students are protesting Indonesia’s new labor law they say will undermine pay and benefits, as well as the environment. The law is part of the president’s efforts to court foreign investors in a bid to drive economic growth,” reported the Christian Science Monitor on Oct. 7.

As the demonstrations spread from Jakarta, the capital, to other cities, thousands of participants, many of them high school students, were arrested. 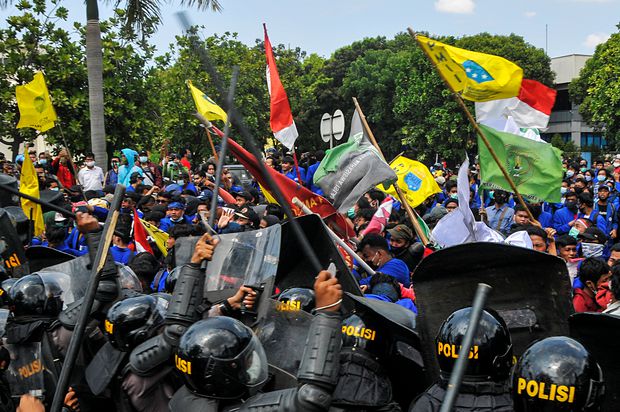 Police blocked the streets in the capital leading to the Parliament building and the presidential palace, after thousands of university students and workers announced plans to hold mass rallies there.

“Similar rallies were also held in Bandung, the capital of West Java province, where clashes between rock-throwing students and riot police broke out since Tuesday, when police tried to disperse the protesters by firing tear gas and water cannons,” the Associated Press reported.

Another AP report noted: “Thousands of workers from factories in Karawang, in West Java, and Serang, in Banten province, also protested outside their factories.”

Before Oct. 1, 1965, the left movement in Indonesia was one of the strongest in the capitalist world. But on that day, a military coup opened the door to a fascist bloodbath that decimated the progressive forces.

In just a few months, up to a million Indonesians were slaughtered by soldiers, police and right-wing vigilantes. The Indonesian Communist Party, which had had 3 million members, was totally destroyed, along with all the mass organizations on the left.

This slaughter established the bloody regime of General Suharto, who ruled until a series of mass demonstrations in 1998 finally forced his replacement. The Indonesian working class and students are now again intervening openly in their own interests.

Protests in the U.S.

In the United States, one of the few groups to protest this 1965 slaughter was Youth Against War and Fascism, an affiliate of Workers World Party. It carried out demonstrations and rallies and published several pamphlets alerting people to the terrible crimes that were being committed against the Indonesian people — and the role of the U.S. government in abetting mass murder.

One of the pamphlets published by YAWF was “The Silent Slaughter,” a record of speeches given at a Public Inquest on the Indonesian Massacre, which was held at Columbia University on June 2, 1966.

In an introduction to the pamphlet, British philosopher Bertrand Russell wrote:

“During October 1965 two representatives of the Bertrand Russell Peace Foundation, close associates of mine, were in Djakarta [Indonesia] attending a conference[, where] few had any doubt about what was taking place around them. The United States Seventh Fleet was in Javanese waters. The largest base in the area, feverishly constructed by the United States but a few months earlier on the southernmost point of the southernmost island of the Philippines, was ordered ‘on alert.’ [Indonesian] General Nasution had a mission in Washington. The United States was directly involved in the day-to-day events.”

In 1965, Time magazine reported that the elimination of communism in Indonesia was “the West’s best news for years in Asia.” (Shimrit Lee, “Memories of Massacre,” Jacobin magazine, June 19, 2015)

Since then, U.S. businesses have become the biggest foreign investors in Indonesia. The superrich in the U.S. are growing even richer from an estimated $36 billion invested in Indonesia from 2013 to 2017, mostly in extractive industries like oil and gas, according to the U.S. Chamber of Commerce.

There can be no doubt that, with so much in profits at stake, the policy makers for U.S. imperialism are already plotting to stifle any resurgence of Indonesia’s progressive movements. The movement here must be alerted to the need for solidarity with our Indonesian brothers and sisters.

Deirdre Griswold’s “The Silent Slaughter” and “Indonesia 1965: The Second Greatest Crime of the Century” are available in free download at workers.org/books.